These Absurd Robots Do Pointless Jobs

But we love them anyway 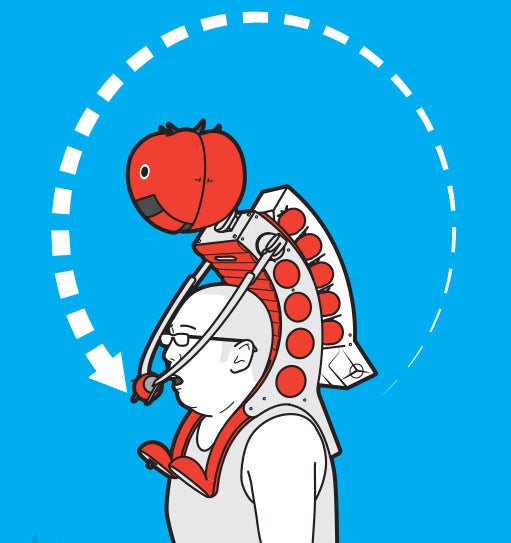 One day, robots will most likely take on many of our most mundane chores. No more folding of laundry or washing of dishes. But until that day comes, we’ll have to settle for ones that take on less-necessary duties. These three ridiculous machines are masters of their utterly odd jobs.

When Michael Nichols heard his neighbors arguing over proper toilet-paper portioning, inspiration struck. The Canadian software engineer—who builds Hallo­ween anima­tronics for fun—decided his next project would be a machine that cuts an indisputable portion: exactly three squares. Pressing one control button unspools the toilet-paper roll. Pressing another triggers an air pressure–driven cleaver to swing through the toilet paper and into the wall behind it. Nichols also added an extra circuit linked to an air freshener. The method works well—as long as users stay clear of the chopping cleaver.

A few months ago, Google software engineer Maurice Bos decided to build a clock for his office in Zurich. A conventional one seemed dull, so Bos created a machine that scrawls the time on a whiteboard. Using a radio-frequency connection, a computer sends instructions to a microcontroller mounted on top of the board. That controller then directs an articulated arm to erase the old time and write the new one with a marker. The process takes about 15 seconds and repeats every five minutes.

Marathon runners need energy on the go. Some chug Gatorade; others eat energy bars. Japanese tomato-product purveyor Kagome has another plan: It built the Tomatan, a shoulder-mounted robot that feeds runners tomatoes. The machine debuted at the Tokyo Marathon in February. It’s activated by an onboard timer that signals one of six tomatoes to roll down a chute at the rear of the backpack. A pair of arms then grab it and lift it over the runner’s head to his mouth. The flagship model weighs 18 pounds, though design studio Maywa Denki has also prototyped a 6.6-pound version called the Petit Tomatan. Lugging either quickly burns through the 132 calories six tomatoes provide.

This article originally appeared in the June 2015 issue of Popular Science, under the title “Absurd Robots For Pointless Tasks.”