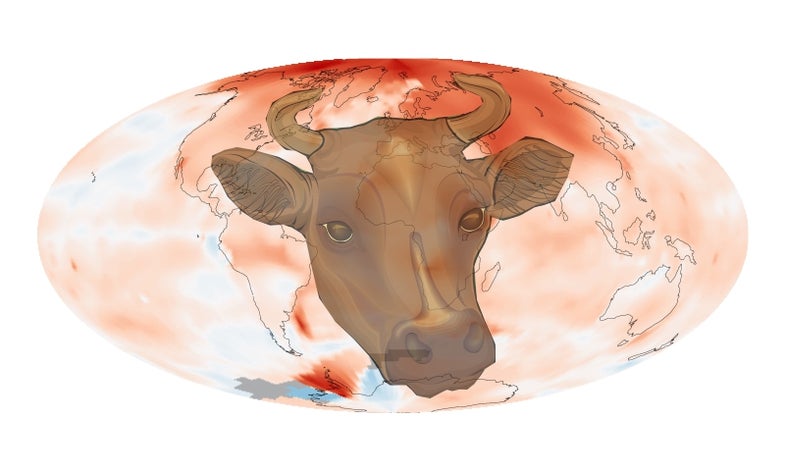 Last week, the United States Senate Committee on Environment & Public Works held a hearing entitled, “Review of the President’s Climate Action Plan.” As expected, the climate change debate took center stage and arguments from both sides were proffered with the political passion mixed in with some scientific evidence. The fulcrum of the debate was carbon dioxide – CO2 – which continues to bear the brunt of blame. Yet, an even worse conflagration of climate security was left seemingly unscathed by criticism.

That menace is the gas known as methane and it has over 20 times the ability to warm the planet than CO2. Yet, the biggest enemies of the climactic state are not the usual suspects of carbon dioxide emissions – factories, cars and other industrial processes. Instead, they are the quiet, relatively docile and for many, amusingly mooing, cows.

Cows have long been known as major methane producers and have been on the radar of the EPA for some time. Back in the 1960s the use of rather harsh chemicals such as chloroform (better known as the solution put in handkerchiefs to render people unconscious) and carbon tetrachloride (the same solution used in dry cleaning) appeared to have an effect on lowering the amount of gas produced. Although the treatment was effective, the overall concept of including toxic chemicals in an animal that produced food was seen as a potential nightmare.

Over the years, other less toxic chemicals were developed and tried. However, the effects on other aesthetic values, such as fat production, were affected negatively meaning that the options, while valid, were not optimal. By the 1990s, the number of diets rivaled that of the human population with researchers attempting to come up with the perfect mix of foods and supplements to create a methane-free environment. However, there were no true successes; the answer remained elusive and the world was doomed to a cattle-catalyzed climactic collapse.

The problem with the research of the past was not for a lack of trying rather the focus of the efforts was misplaced. Methane in a cow’s stomach is caused by a fermenting bacterium known as a methanogen. These microbial marvels have been known since the 1930s and have continually been a focus of interest to environmental microbiologists. However, these bacteria were thought to be components of waste products, such as sewage rather than stewards of a section of a cow’s stomach– known as the rumen. Yet research revealed that these same bacteria that created the methane gas at landfills and in wastewater were the same as those inside the bovine gastrointestinal tract.

The result was a shift in focus from the cow to the cow microbiome. Researchers – armed with the same tools as the Human Microbiome Project – went searching for the methanogens in the hopes of finding answers that could be translated into diet and/or husbandry changes. For the last decade, papers revealed that much like humans, no two animals had the same bacterial profile; the microbial constiutents were specific to geography; and small changes in diet led to dramatic shifts. There was even evidence to show that the methanogens controlled the “feed efficiency” of the animal suggesting there was both an environmental as well as an economic impact.

The data was so diverse and complex that the hope for an answer quickly faded, turning from a light in the dark to a needle in a haystack. With each new revelation, strong, standardized and effective regulations became less likely. Without some central hub to collect, aggregate, analyze and eventually translate the data, the likelihood of a low-methane producing cow was minimal at best.

This week, however, such an entity arose from the University of Nottingham. Called Ruminomics, the research-focused project involves members from the UK, Italy, Finland, Sweden, Czech Republic, France and The Netherlands. Their goal is to understand the complex link between animal, food, rumen bacteria, and methane production. Their ultimate outcome is to improve the efficiency of raising an animal as well as ensuring the lowest footprint – and flatulence emissions – possible.

The project is divided into 10 specific objectives ranging from the identification of microbial species and the impact of dietary changes to the development of recommendations for cattle producers. With the current tools in hand, results should take no longer than a few years and with any luck, a few years after that for the development of policies at the governmental level. By 2020, the group should have put in place a well-defined, cost-effective and easy-to-implement strategy for the reduction of methane emissions from the rumens of cows. Of course, that all hinges on two requirements: funding and a slow evolution on the part of the microbes. While the former may already be in place, the latter is never a sure thing.

The aims of Ruminomics may seem to be outside the normal context of the discussions relating to climate change, global warming and the like. However, the team does present a useful model to advance the knowledge and certainty of similar climactic issues. With a proper protocol, execution, analysis and translation of the work, a valid conclusion may be reached and disseminated for everyone to see and accept. In a world where even the most untrained individual can spark doubt in the public’s mind despite all the evidence, this format may be a very welcome solution.