The mouse to end all mice

Dispelling the myth that wired is better. 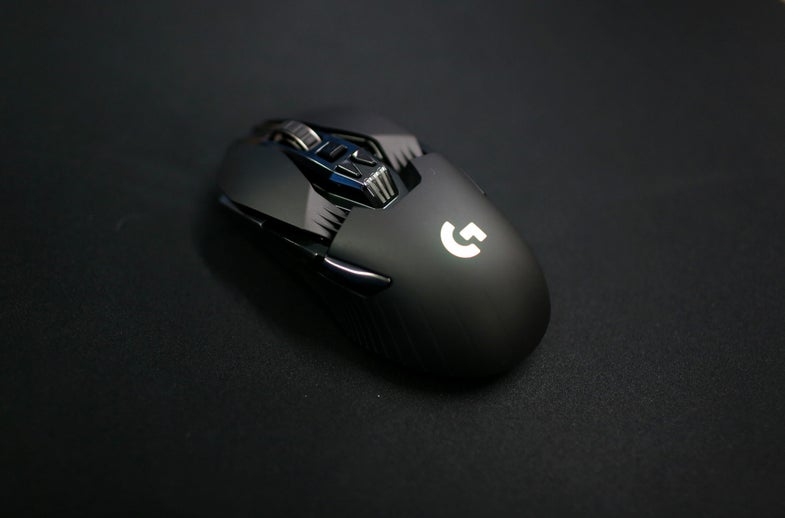 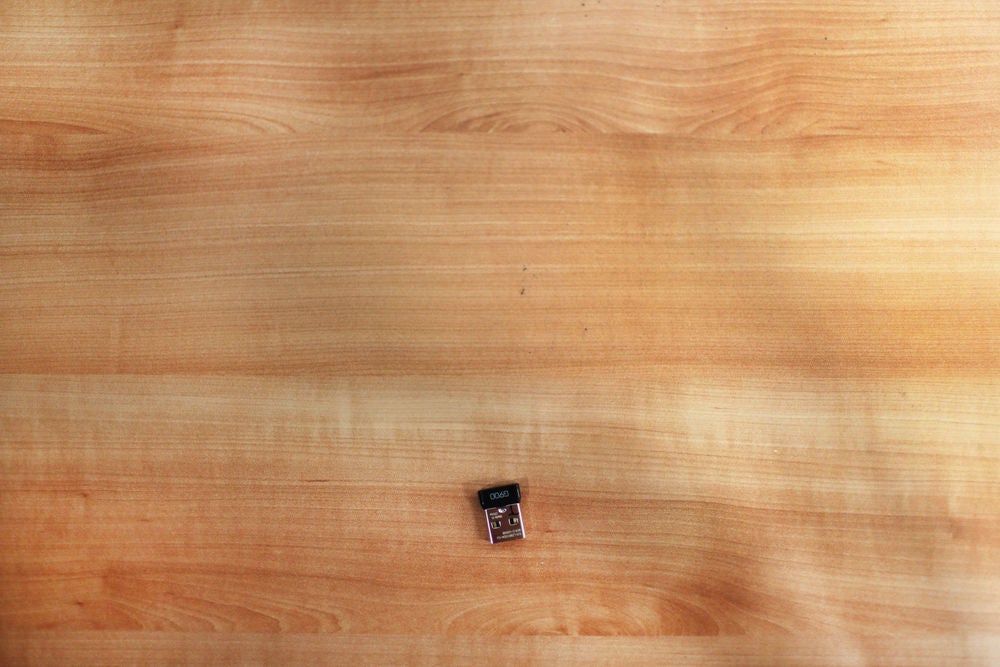 The new mouse claims to be as good or better than its wired counterparts.

We’re living in a world where the mouse and keyboard are quickly becoming legacy inputs. The future is a quickly-changing concept, now filled with gesture recognition and voice-only interfaces, and it surely doesn’t look the same as it did when the first mouse was brought to market in 1981.

But the basic idea of a mouse hasn’t changed in the last 25 years, and it’s still a staple of desktop computing, especially for gamers. What has changed, though, is the level of technology in these mice. Advances in sensors, microcontrollers, and wireless protocols have kept users satisfied over the years with increasing reliability and responsiveness.

However, when it comes to wireless mice, there has been a disconnect between perception and reality. Wireless mice are seen as laggier, not as accurate, or incapable of holding a charge for long enough.

Logitech, a Swiss company known for their gaming peripherals, wants to destroy those perceptions with one product.

Today Logitech is announcing its G900 Chaos Spectrum gaming mouse, and with it, a list of hefty claims. The wireless mouse is reported to respond faster than wired alternatives, and immune to high levels of radio interference. It also only weighs 107 grams, lighter than its competitors by about 20 grams. However, it also claims to have longer battery life, clocking in at 32 hours of continuous use.

The G900 Chaos Spectrum has been in development for 3 years, a joint venture between Logitech’s Swiss and Irish R&D centers. The mouse is Logitech’s big play to become an even more dominant force in professional gaming, and in that pursuit they set to create the professional’s wireless gaming mouse.

These are bold claims. So, Logitech flew us to Switzerland to test it for ourselves.

Nestled in the hills next to Lake Geneva, Logitech’s Swiss home is located on the École Polytechnique Fédérale de Lausanne campus, about an hour outside of Geneva’s city limits.

Here, the company does most of its latency and wireless testing. Their building houses a full anechoic chamber, which completely isolates anything in the room from any wireless network or connectivity. The compound is also home to a host of custom contraptions meant to poke, prod, accelerate, decelerate, track, and jog computer peripherals within an inch of their life, and then a little bit more.

Some of Logitech’s most successful products were built in this lab, and that legacy is enshrined in small glass showcases in many of the rooms. Posters adorn the painted cement-block walls, with charts highlighting the G900’s advantages against its competitors.

In the room containing the anechoic chamber, a cart with plastic shelves overflows with gaming mice. And not just Logitech’s. Here, the company tests its mice against its competitors with a standardized test it has devised.

The mouse is placed on a styrofoam platform, in a contraption they call a “jogger.” It’s a clamp around the mouse with a moving paddle underneath, which causes the mouse to endlessly draw circles. The RF receiver is placed about 3 feet away, and a cord connecting the receiver to the computer is snaked through a tiny hole in the chamber’s wall.

The mouse is set to jog, and perfect circles can be seen on the computer outside. Then, an antenna in the chamber then blasts the mouse with wireless traffic on multiple bands and frequencies like Wi-fi, Bluetooth, and 3G. This simulates a noisy RF environment, like would be seen at a LAN party.

As the mouse is being blasted (which is a silent process), I’m standing outside the chamber with two Logitech engineers, who are patiently explaining how the mouse jumps from frequency to frequency in order to mitigate interference. The G900 is running perfect circles.

After a few minutes, we switch mice. Somebody suggests the Razer Mamba, Logitech’s biggest competitor in this space.

Same test, same interference, but suddenly the circles are oblong, and the input jumps erratically.

An engineer explains that when the mice jump to a different frequency, they don’t hand off the input perfectly: that gap in transmission accounts for the jump.

We test mouse after mouse, blasting more than 20 times the levels of RF Logitech recorded at a LAN party before we had arrived. None drew perfect circles except the G900.

Logitech uses two contraptions to measure latency. One measures sensor acceleration and deceleration, and the other click latency.

This might spoil the ending, but Logitech consistently outperformed their competition (albeit in tests of their own design). The methods they use are interesting, and the data speaks for itself, but what’s important to remember is that these are improvements that very few people, if any, would be able to perceive. Even with a 144 Hz monitor, the millisecond different between the G900 and a wired mouse, or even between other wireless mice, only means about a frame of video. While that frame might mean virtual life or death for the most professional gamers, it’s not something I could notice.

However, the methods of testing were nifty.

The sensor acceleration and deceleration were recorded by connecting the mouse to a computer, and placing it on a mechanically spinning surface, like a turntable. Knowing the exact acceleration of that turntable, the engineer could match the input of the mouse to that data. The test mouse looks like it’s paying for some horrible crime committed against peripherals everywhere. It’s hot-glued and clamped to a metal bar that holds it in place during the test.

In click latency, a timer was wired into the the mouse to record the exact moment of click, and then a USB analyzer recorded when the RF signal was received. Then the engineer could match the wireless latency against the electrical actuation of the switch. 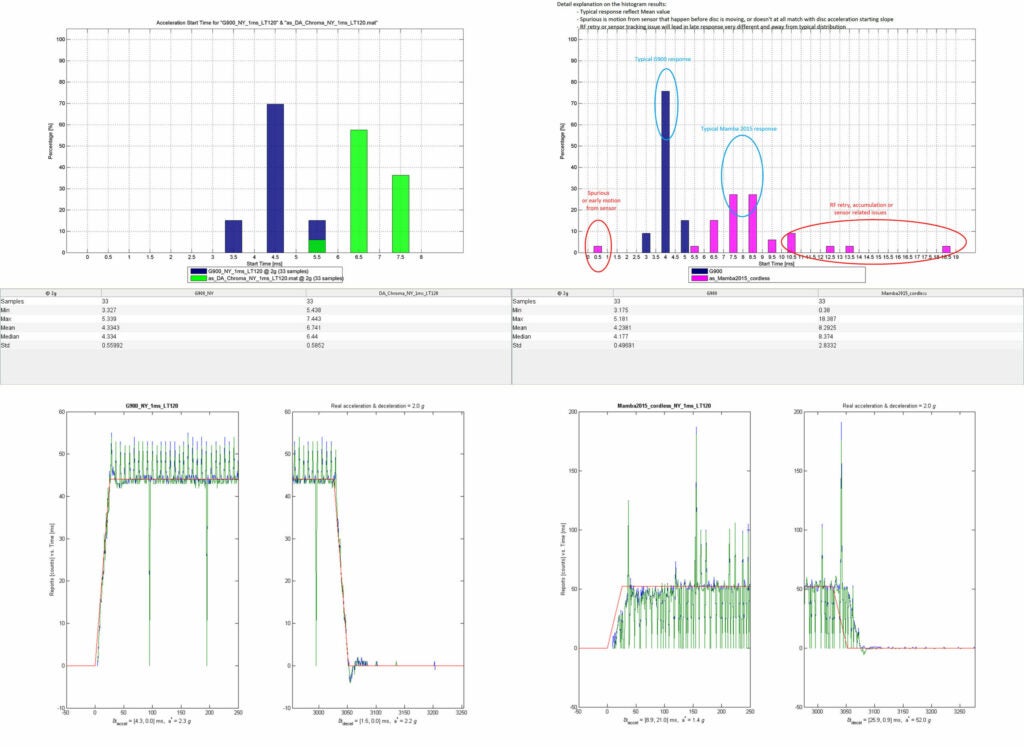 Material design represented a huge effort in the production of the Chaos Spectrum as well. The result is a mouse that isn’t built like anything else on the market.

Instead of mounting everything on the circuit board, the G900 actually has layers of components. The sensor and board are obviously in the lowest portion of the mouse, but on top of that are two independently secured switches (the click-y bits), for left and right click. Resting on the switches are two independent paddles, that actually move up and down as a whole part when pushed. This is Logitech’s alternative to the plastic being a part of the chassis of that mouse, that bends to initiate a click.

All this engineering is to create a more precise and consistent click. Since the switches are independently seated, they can be angled to be perpendicular to the force of the click. Humans have curved fingers, so no click is just up and down. The normal click is off-axis. When the switches are not angled, there can be friction that changes the force required to click. Not a huge deal for Microsoft Excel, but that click could mean $5 million dollars to a professional gamer.

The fact that the paddles move independently is important as well. Every user’s hand is going to be different, so most people won’t click all in the same place. When the plastic has to bend, there’s a different amount of force required to click, varying based on finger placement. With a swinging paddle on a pivot, that difference is still present, but greatly mitigated. The idea is to create the most consistent, purest click possible.

But the heart of Logitech’s pitch is more than just this one model of mouse. The G900 is more a proof of concept than anything else. Wireless can be better. Even inviting me and other journalists into the Swiss lab was a show of bravado meant to justify the numbers.

And from everything I’ve seen, the numbers don’t lie. The G900 is a great mouse. It feels good in the hand, every click in my testing was full and true, and it’s light enough to be comfortable over long periods of use. Is this the mouse for everyone? Absolutely not. It’s priced at $150, aimed at those who want or need to spend money on gaming. It’s a professional level mouse for professional gamers.

Posters in the facility hinted that wireless keyboards could be the next on the horizon. And that’s a good thing. We’re living in a time where billions are invested in being able to wave our arms at computers, so they can tell what we’re doing. But somewhere, nestled in the hills of Switzerland, there’s a company that’s trying to perfect what we already have.