The Many Flavors of 4G

All of the mobile carriers are liberally tossing around the same "4G" label for their new networks and gadgets here at CES, but the real meaning of the word is not as clear-cut 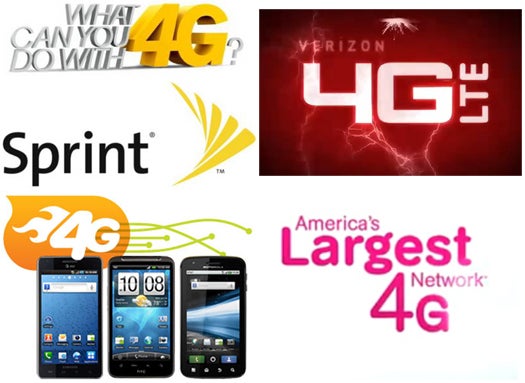 Almost every high-profile smart phone to be unveiled at CES this week boasts a super-fast “4G” network connection. But depending on the carrier, “4G” can mean many different things. Here’s the breakdown.

Essentially there are three types of networks the carriers are currently calling 4G: HSPA+ (High Speed Packet Access Plus), LTE (Long Term Evolution) and Wi-Max. And each carrier uses a different one (or a combination of two or more). You’re probably already familiar with the GSM/CDMA divide, with Verizon and Sprint on CDMA and AT&T and T-Mobile on GSM. The difference between the 4G networks works in a similar same way.

Verizon: As you’ve probably seen via their recent marketing blitz, Verizon’s moving fast with their next-generation LTE network, which is actually based on GSM technology (an interesting change, because Verizon’s 3G network is CDMA/EV-DO). The network is largely deployed already (Verizon’s current count is 38 major cities and 60 airports). LTE’s capacity is huge: Verizon boasts download speeds of 5-12 Mbps, which is on par with a standard home broadband connection. Another benefit of LTE is that it’s an entirely different network than VZW’s CDMA 3G, which means the chances of overcrowding are lower.

AT&T: AT&T is also rolling out LTE, but not yet: today they dropped a cagey “mid-2011” date for an initial LTE rollout (in a limited selection of cities, to be sure). They hope to be done with their LTE rollout “by the end of 2013.” In the meantime, AT&T is calling their enhanced HSPA+ network “4G.” HSPA+ is at its core the same protocol used by their current 3G network, just with added capacity. HSPA+ is the slowest of the three main 4G options. Today’s AT&T phone announcements are the first hardware devices to take advantage of the HSPA+ network, and AT&T is still fairly cagey about their 4G coverage map. Basically, AT&T is playing catch-up.

T-Mobile: T-Mo is further along with their HSPA+ than AT&T, currently claiming “over 100 major metropolitan areas” with coverage. So while their enhanced 3G network is fairly beefy and you can use it today on a variety of phones and laptop cards, they currently have no solid LTE or Wi-Max plans for the United States.

Sprint: Sprint is the only major player that stuck with Wi-Max, another GSM-based protocol that was an early contender for a 4G wireless broadband standard. Generally speaking it’s faster than HSPA+ but not as fast as LTE. Sprint has had 4G hardware available for several months to take advantage of this network, including the HTC Evo 4G smartphone and a variety of modems and dongles.

Phew! As you can see, the 4G landscape is pretty crazy. Another interesting thing to consider: moving from 3G to 4G connectivity is more of a hassle when the two networks’ protocols are different. If you drop out of a 4G zone on Sprint, for instance, your device has to switch to a different type of radio band to re-connect to the CDMA/EV-DO 3G network. On T-Mobile’s (and presumably AT&T’s) HSPA+ networks, this is less of an issue.