Testing the Best: The Toshiba Libretto, an Endearing Weirdo 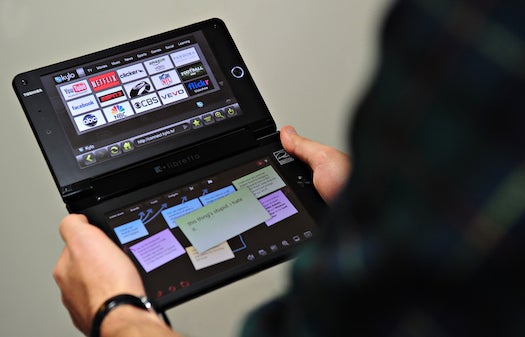 The Toshiba Libretto W105 is a napkin-sketched concept unexpectedly brought to life. It’s the kind of gadget that’s mused about in tech blog comment sections: “What if they made a tablet with–wait for it–two screens? How awesome would that be?” Of course, nobody really expects a major company to produce such a weird, ballsy device, except maybe for a limited demo at a convention, never to be seen again. But Toshiba went ahead and actually did it.

The two-screen concept isn’t exactly a new one. Hardcore gadget nerds will lament the lost Microsoft Courier, a dramatically innovative two-screened tablet with an aesthetic as inspired by Moleskine as the iPhone. The Courier was cancelled soon after it was unearthed, for unclear reasons. Other companies, notably Acer and Asus, have offered concepts or prototypes, and then there’s the massive textbook-replacement Kno (two 14-inch screens!), which should be released…eventually. One low-budget company released a dual-screen device in which one screen was e-ink, the other an Android tablet, though nobody that used it seemed to like either side very much.

This is all a very long-winded way to lead up to the night I took the Libretto home and introduced it to my roommate. I, a gadget nerd, was incredibly excited about it. I played with it for an hour or so, noting its strengths and weaknesses with a critical eye but loving the little oddball–it surprised me so much simply by existing, I never really got over the “oooh shiny!” phase. Then I passed it to my roommate, who has proven impressively capable of dealing with the litany of electronic nonsense that litters our apartment, and went to the bodega across the street for some milk. When I came back, the Libretto was on our coffee table, with the addition of a note my roommate had written with the tablet’s custom note-taking software: 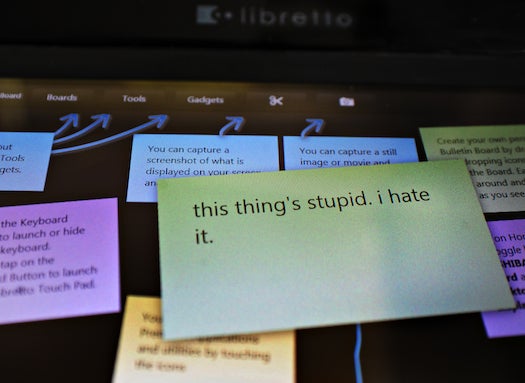 Toshiba Libretto W105: Not for Everyone

Not everyone is as charmed by the Libretto as I was.

She’s not entirely wrong. The Libretto can’t seem to make up its mind whether it’s a tablet or a netbook, and taking the middle road hurts its use as either. Windows 7 is, as we know very well by now, a poor choice for a tablet operating system, one which hurts the Libretto’s practical use as a tablet. As a netbook, the second touchscreen becomes a very cool hindrance, rather than a help, and the 7-inch screen size is really too small for a netbook. And, yes, the Libretto doesn’t take advantage of the fact that it can be held and used like a tiny book–there’s no way to read ebooks the way you’d want to, one page on each screen.

Yet all that night, I used it. With my MacBook Pro sitting on my desk, closed and forlorn, I used it. I forced it to behave the way I wanted, downloading an obscure web browser meant for home theater PCs (Kylo) for its large, finger-friendly buttons. I used a flashy 3D desktop called BumpTop to get some use, any use, out of the bottom screen. I dug through menus to increase the size of the taskbar and menu bars. I hunched, ogre-like, over the two tiny screens sitting on my lap. I coerced, pleaded, and tricked it into usability–and I’m glad I did.

I did these things because the Libretto is gloriously, irrevocably, inevitably unique, and fun. It is a limited-edition device, as well it should be, priced at a frankly ridiculous $1,100. But! If you see this thing in the wild, a demo unit on a dusty Best Buy endcap or on the coffee table of an undiscerning and highly moneyed gadget nerd, pick it up. Play with it. For five minutes, ten minutes, an hour, it is gleefully fun, strikingly audacious. It is a Best of What’s New winner for its sheer contrariness. It is absolutely futuristic–one of the most exciting gadgets I’ve picked up all year.