Instead of succumbing to the smartphone, this watch works with it 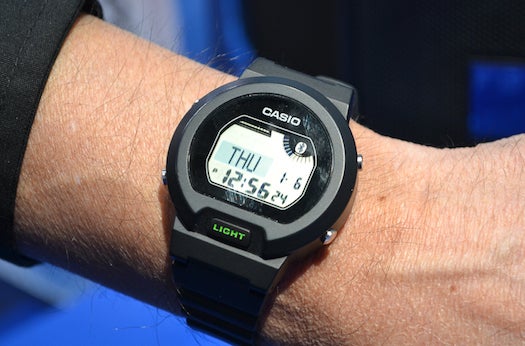 Phones have done a number on watches–all too many people have ditched the wristwatch in favor of just whipping out their phones to check the time. But Casio’s new watch uses Bluetooth to work with phones (in particular, Android smartphones), delivering crucial information and offering some pretty sweet new features, including a “find my phone” feature and caller ID.

The watch shown here isn’t necessarily due for market; it’s a prototype, though more in design than in actual features. You can expect to see watches that work pretty much like this one, even if they don’t look much like the somewhat barebones (read: kinda ugly) one I saw. The big thing that’s new with this watch is the use of Bluetooth 4.0, which actually brings enough cool new features to disassociate the protocol from corporate headsets. Key among those features is BLE, or Bluetooth Low Energy.

Bluetooth 4.0 has two separate configurations: Either typical Bluetooth, which offers reasonably fast speeds within a five-meter range, or both typical Bluetooth and BLE. BLE is remarkable for its ridiculously low power consumption–it might be slower than regular Bluetooth, but you can run a BLE device off a standard watch battery for an entire year. That’s bonkers–normal Bluetooth is a pretty serious battery drainer, so this is a huge step up.

This watch communicates with an Android smartphone via a free app. You won’t be reading emails on its monochrome screen, thank God, but it is a surprisingly great method for getting notifications. When you get a call, your watch beeps and flashes the name of the person calling. Ditto for text messages and emails. In testing, I found that it worked perfectly–the call showed up instantaneously on the watch, and would definitely reduce the number of calls missed because a phone is buried in a bag or accidentally set to vibrate. 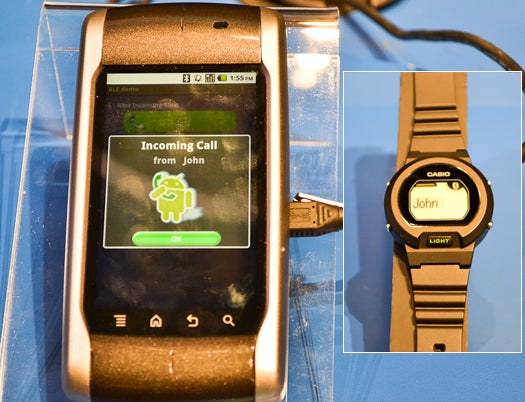 There’s more to it than just notifications; there’s a very cool “find my phone” feature that’ll let you buzz your phone without having to borrow a friend’s phone to call your own. Unfortunately, the limit of BLE’s range is only five meters, so you’ll have to hope you’ve lost it very close to where you’re standing. Other features, like music and volume control, are apparently coming soon.

Casio’s likely to pop this tech into its G-Shock line–the watches are big enough to house the tech inside, and the line is particularly successful. The rep wouldn’t get any more specific about release date than “this year,” but it seems perfectly functional even now.