Dinosaur fans have barely recovered from the revelation that some dinosaurs were not scaly, but feathered. Now it looks like those fans will have to update their mental imagery once more: several of the same researchers who brought us vivid images of colorfully feathered velociraptors two years ago have come out with a paper today in Science offering conclusive evidence of the first known iridescent dinosaur.

That distinction belongs to the microraptor, one of a class of birdlike carnivores called dromaeosaurs (colloquially, “raptors”) that lived roughly 120 million years ago. It stands out from other raptors thanks to its unusual four-winged form and to the fact that, weighing in at less than 1 kilogram, it was small enough to fly, at least in a sense: scientists believe that the air resistance provided by its feathers helped it glide from tree to tree.

Those four wings appear even more striking now that we know they were iridescent. Iridescence is a property of some surfaces – such as soap bubbles, oil slicks, and birds like peacocks, hummingbirds, and grackles – that makes them appear to change color when viewed from different angles. When it occurs in plumage, it’s because of alternating layers of keratin, air, and melanin at the cellular level of the feather, all scattering light at different frequencies.

The team produced a conservative reconstruction that assumed the simplest kind of iridescence, the glossy blue-on-black found on grackles and crows.By studying a set of feathers from modern birds, for which both the cellular structure and the appearance are known, the Science team was able to derive a set of structural factors that tend to go along with iridescence. The most telltale sign? Long, narrow melanosomes, the organelles in a cell in which melanin is stored. After collecting 20 samples of fossilized melanosomes from a well-preserved microraptor specimen from China’s Liaoning province, the researchers were able to demonstrate that its slender melanosomes unambiguously match those associated with iridescence in all of the available bird species of which we’re currently aware.

We can’t be nearly as confident, warn the researchers, about which type of iridescence the microraptor’s feathers displayed. Iridescence can take many forms depending on the organization of the melanosomes and the keratin in which they are embedded. Examples in modern birds range from the grackle’s simple blue-black sheen, produced by a smooth layer of melanosomes topped by a smooth layer of keratin, to the peacock’s ever-shifting rainbow, produced by a spongy layer of keratin dotted with air bubbles.

Since keratin doesn’t fossilize, that structural information has been lost for the microraptor. “Imagine if you had a brick building and you removed the cement. All the bricks would collapse together,” said molecular paleobiologist and paper co-author Jakob Vinther. Lacking the ability to infer the microraptor’s particular kind of iridescence, his team produced a conservative reconstruction that assumed the simplest kind, the glossy blue-on-black found on grackles and crows.

Knowing that microraptor’s feathers were iridescent also sheds light on another recent debate. A 2011 paper in Science claimed to be able to infer whether a dinosaur was nocturnal (active at night) or diurnal (active during the day) based on the shape of its scleral ring, a feature of the eye, and used this method to declare the microraptor to be nocturnal. But this recent discovery raises a question: why would a nocturnal dinosaur have showy iridescent feathers that can only be seen in daylight? Vinther noted, “Nocturnal birds don’t have feathers designed for display purposes, because in the daytime when their feathers could be seen, they’re inactive.” Think, for example, of the drab plumage of owls. “This is an example of why it’s important to learn about coloration, because it can help us question other kinds of evidence,” Vinther said. 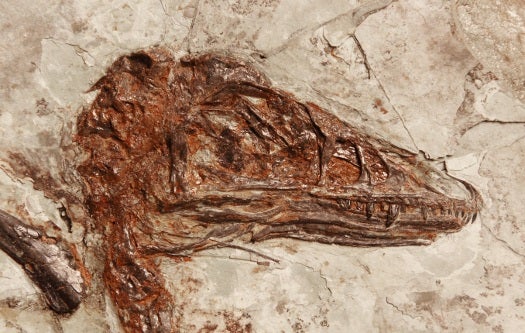