Check out the most complete 3D brain map ever made 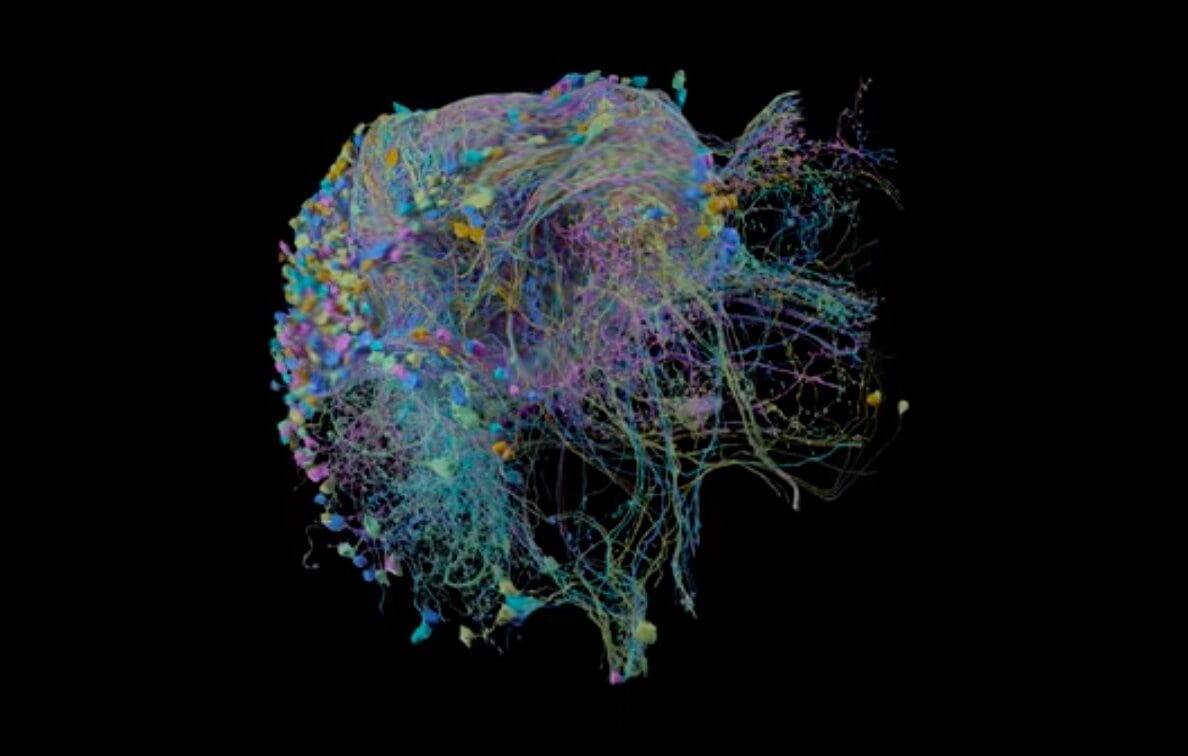 The map traces the 250-micrometer fruit fly hemibrain–about a third of the total organ. Through the map, researchers hope to better grasp the fly’s nervous system.
SHARE

You can now explore the biggest high-resolution brain connectivity map in any animal, thanks to researchers from Google and the Janelia Research Campus in Virginia. The vibrant brain-wiring diagram, also known as a connectome, outlines a fruit fly’s approximately 25,000 neurons all linked together by 20 million synapses. It’s also quite pretty.

The map traces the 250-micrometer fruit fly hemibrain–about a third of the total organ. It measures less than one-fifth the thickness of a dime and contains regions associated with key functions like learning and memory.

Through the map, researchers hope to better grasp the fly’s nervous system. The central complex brain circuit, for example, contributes to motor control, navigation, and sleep (yes, fruit flies sleep!) The broader field of connectomics, which emerged within the past two decades, aims to understand how brain structure relates to crucial neurological functions.

The model could constitute a small yet significant step toward understanding the connections within our own minds as well. Scientists have currently mapped out the human brain’s broader structural links, though they haven’t reached the neuron-specific level.

Google’s 3D model is helpful because it bolsters the study of functional interactions between brain regions, says Monica Rosenberg, an assistant psychology professor at the University of Chicago who builds brain models to demystify human attention patterns.

“On a very broad level, I think this will be important for neuroscience across species,” Rosenberg says.

However, she doesn’t think similar 3D human models will arrive any time soon. Right now, the endeavor would require an unimaginable amount of data to process—plus, invasive research on the human brain is currently under debate.

Brain connectivity could also differ among individual fruit flies; a single model likely won’t provide any universal truths. Studies of the human brain depend on differences between people, says Dustin Scheinost, an assistant professor at the Yale School of Medicine. Scientists analyze why some people develop certain disorders, while others with similar backgrounds and genetics don’t, to better understand a specific disease’s root cause.

“How it scales up to more complex animals will be the big question,” Scheinost says.

Still, the fruit fly model was no small feat. The Janelia team worked over a decade to perfect the prototype before teaming up with Google’s connectomics team in 2014. Researchers developed new technological methods in order to stain the fly brain and chop it into 20-micron thick slabs. Next, they scanned it with custom ion-beaming microscopes.

It also took some old-fashioned manpower: The model required two years and hundreds of thousands of hours of human proofreading to ensure that each tiny neuron shape was rendered correctly; researchers carefully parsed through the model with VR headsets and 3D custom object-editing tools.

With the map’s release, Google and Janelia freely provided their data and coding online. These open-source materials reflect a broader trend within science, Rosenberg says, which boosts further research developments. It’s a courtesy she hopes to see more of in the future.

“The endeavor of understanding the brain and the mind is so massive,” she says. “We’ll make the most progress when we work together and share our findings.”