Testing The Goods: The New Apple TV Is Smaller, Sleeker, and Often Frustrating

Apple’s new Apple TV has been overhauled. It’s been shrunk to a tiny black square, with a new interface and... 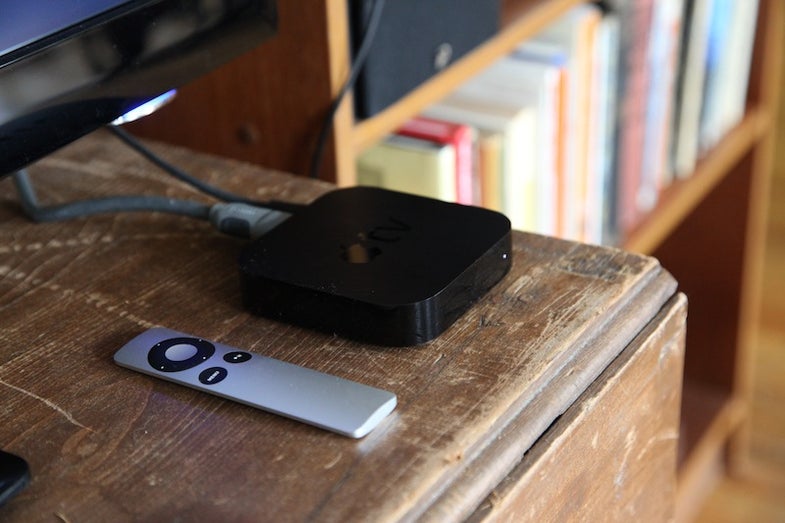 Apple’s new Apple TV has been overhauled. It’s been shrunk to a tiny black square, with a new interface and some great new features. But while it does some things very well, it’s severely lacking in both content and functionality.

This fall, companies both big and small are betting on connected TV, but there’s no real consensus on how to do it. Google, for example, is taking a fundamentally Googley approach with its own Google TV (coming this month for an as yet undisclosed price), adding search and web apps to the services you already have, like cable TV or a DVR. Boxee, the open-source, Linux-friendly community, is releasing a typically open-source, does-anything kind of player in the Boxee Box (coming in November for $200). Roku is continuing to add great apps to their budget-priced players, with Hulu support coming soon.

And Apple’s revamped Apple TV is Apple all over: beautifully designed on both the hardware and software side, and excellent at working with other Apple products like iTunes and hardware like the iPhone and iPad. Want to stream your music to the living room, watch TV shows you’ve downloaded to your iPhone, or stream from your Netflix queue? The Apple TV can’t be beat on any of those fronts. 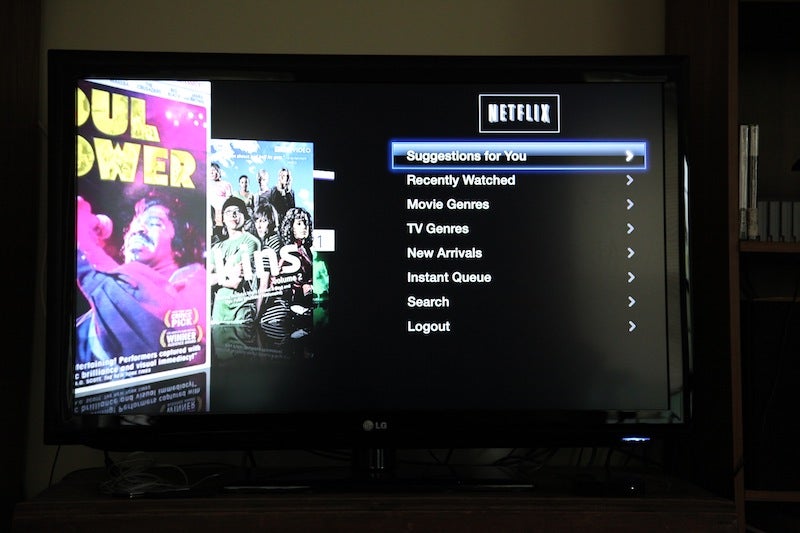 Revamped interface, Netflix support, TV rentals, tiny body, lower price (only $100, making it one of the cheapest options out there), and a new remote. There’s also been a fundamental change in hardware philosophy: The new Apple TV doesn’t have a hard drive or hardly any ports at all (like USB or standard-def video-out)–this is a streamlined streaming device, not a computer for your TV.

The price and physical body of the Apple TV are both delightfully small, and the Netflix integration might be the best I’ve ever used. Streaming from Netflix was faster and of notably higher quality than from a home theater PC running Boxee, and at least as good as on Roku and the Xbox 360. The Apple TV is great at streaming both video and audio content from your computer’s iTunes library. The interface is intuitive, consistent, and very pretty. Set-up is dead simple (though the remote can be frustrating for text entry–more on that below) 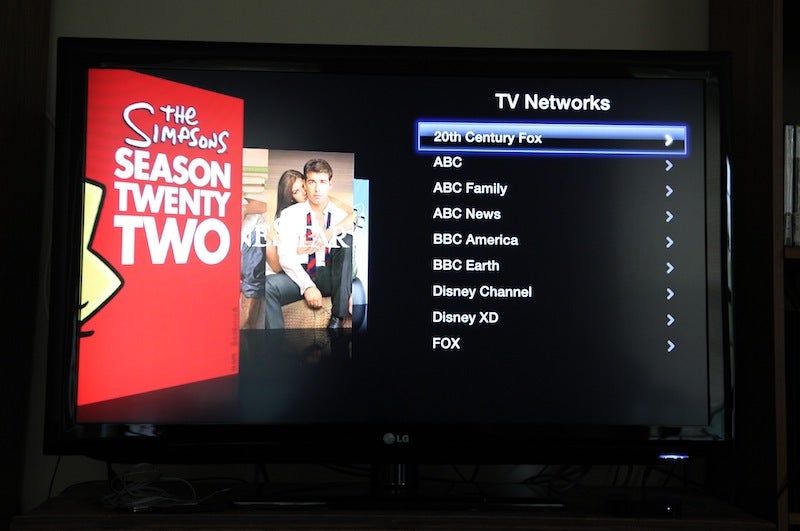 The two main problems: content and functionality. The selection of TV shows is totally anemic, lacking, for some reason, even top-selling shows found in the desktop version of iTunes (including 30 Rock and The Daily Show). It can only stream videos in iTunes-compatible formats, which means most downloaded video will have to be converted. It doesn’t stream from any service besides Netflix and YouTube–no Hulu, no Pandora, and no network-owned sites (like ABC.com or ColbertNation.com).

The rental system itself is easy to use, but not a very good deal, even forgiving for the moment the tiny selection: Each episode costs $1, can only be watched once, and is restricted to the Apple TV. Rent a show on the Apple TV, and you won’t be able to finish it on your computer or iPhone–it can only be viewed on the Apple TV, and only within a 48-hour period after you started watching.

In contrast, streamed episodes from a service like Hulu are free (albeit ad-supported) and allow you to watch them as many times as you like. Downloaded episodes from services like Amazon Unbox (or even the normal version of iTunes!) can be watched on multiple devices (like smartphones or portable media players), and also have no limits on views. 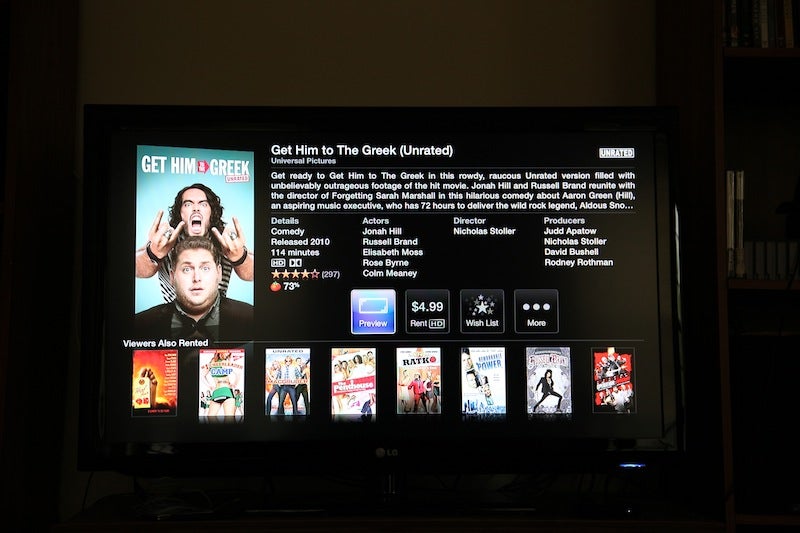 Even worse, renting is the only option on Apple TV. It would have been great to have the option to purchase content to stream from the cloud any time, but that option is nowhere to be found: It’s rent or nothing. The only workaround is awkward and unnecessary: You’d have to purchase content on your computer, and then stream it to the Apple TV. But what’s the point of that? Why should you have to run to your computer every time you want to watch a new episode of Top Chef? Why can’t you just buy it with the Apple TV?

The remote is lousy; it’s pretty to look at, but interminably slow for entering text (which is necessary when you want to search for something), and very peculiarly lacking a volume control. Apple TV only connects to TVs via HDMI, which means older, standard-def TVs won’t be compatible.

I also found that streaming content, especially HD content, often involved an unusually long wait before it began playing. The Apple TV creates a significant buffer before starting any video, to avoid having to stop and load. But that often took longer than I’d have guessed, frequently as long as a minute or two (which seems longer when you’re staring at a black screen). Hopefully Apple fixes the speed issue with a firmware update soon. 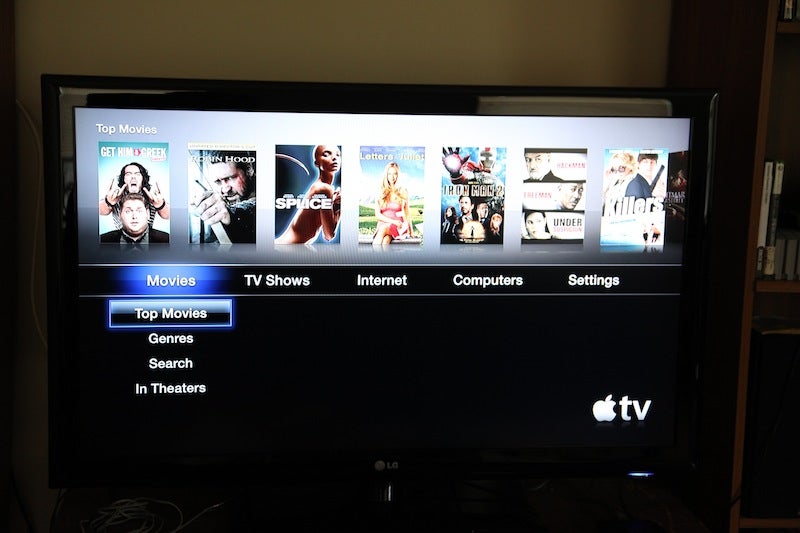 The Apple TV is tiny, intuitive, and cheap, and is great at streaming content from iTunes, iOS devices, and Netflix. But for those who get their content from places other than iTunes and Netflix, there are better options. Even as an iTunes streaming device, it could be so much better–it’s unnecessarily restrictive (why can’t I purchase, rather than rent, TV shows and movies? Why can’t I play those videos on any device other than the Apple TV?) and often slow to stream.

There are too many caveats for me to wholeheartedly recommend the Apple TV. It’s not that it’s a bad device, but it’s so limited in ability and in usefulness that even the $100 asking price starts to seem merely adequate rather than inexpensive. If you just want to stream music and video from your computer’s iTunes library to your TV, and maybe watch Netflix every once in awhile, then by all means pick up an Apple TV. But the state of web media today is so much more than just iTunes and Netflix–it’s Hulu and Pandora and MOG and NBC.com and Rhapsody and Funny or Die and CollegeHumor and…

Well, I could go on forever. But the Apple TV can’t. If you want to truly connect your TV and have access to all that great stuff on the web, wait for Google TV or the Boxee Box.