The BlackBerry tablet has been rumored for almost as long as Apple’s iPad, but with considerably more dread: Can BlackBerry’s... 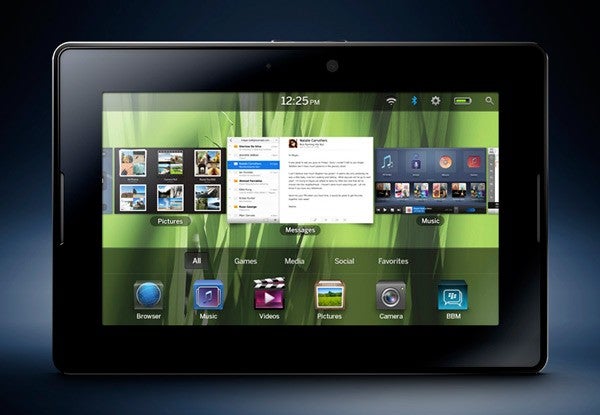 The BlackBerry tablet has been rumored for almost as long as Apple’s iPad, but with considerably more dread: Can BlackBerry’s aging (read: ancient) OS translate to the larger screen and greater power of a tablet? The answer, it turns out, is no. Thankfully, the BlackBerry tablet, to be called the PlayBook, opts to use an entirely new operating system, and it looks surprisingly great.

RIM, the Canadian maker of BlackBerry smartphones, unveiled the BlackBerry tablet today, officially named the PlayBook. It’s a 7-inch tablet, smaller than the 9.7-inch iPad but significantly larger than a smartphone. This seems to be a go-to size for the tablets that have come in the wake of the iPad, interestingly. Samsung’s Galaxy Tab is also 7 inches, though Sharp’s newly announced Galapagos tablets will be available in oddball 5.5-inch and 10.8-inch sizes.

The PlayBook is a very capable tablet, at least on paper. It’s got a dual-core 1GHz processor (the iPad has only a single-core), 1GB of memory (the iPad has only 256MB–its biggest shortfall), two cameras (a 3MP front-facing, for video chat, and a 5MP rear-facing), and ports galore (HDMI-out and USB are mentioned). The PlayBook will also be able to pair with BlackBerry phones, which is a new and welcome feature for this kind of smartphone-like tablet.

That ability to attach a BlackBerry smartphone might turn out to be essential, because the PlayBook is only packing a Wi-Fi and Bluetooth connection. RIM did say that the PlayBook might get a 3G and/or 4G version at some point in the future, but no specifics were given. You might end up having to tether your smartphone to the PlayBook to have always-on Internet access.

What’s most exciting about the PlayBook is that it totally abandons any pretense of the old BlackBerry OS, which has remained aesthetically similar–now very dated–for several years. The PlayBook instead uses the brand-new “BlackBerry Tablet OS,” which seems to have more in common with Palm’s card-based WebOS (used on the Palm Pre and Pixi) than with iOS or Android. Apps are shown as individual thumbnails, which can be scrolled through. When selected, that app is blown up to full-screen. Underneath the thumbnails is either a fast-switcher or a repository of frequently used apps.

The browser looks fairly similar to the brand-new WebKit-based browser (which basically means “modern,” these days–everything from Google Chrome to the iPhone’s Safari browser runs on WebKit) seen in the new BlackBerry Torch, but looks even better on a big screen. The PlayBook supports Flash, too, as well as HTML5 and Adobe AIR, so you should be able to load pretty much any site on it.

BlackBerry’s biggest weakness in recent years has been apps, and RIM is now promising to secure developers to get a real app scene going–especially in gaming. The tablet will also, being a RIM product, have business-friendly features, though none were named specifically. But the video shows the tablet beaming spreadsheets and presentations through HDMI to a projector, so you can probably expect a full range of corporate apps. It’ll get some nice ebook reader apps as well; Amazon already announced that the excellent Kindle app will be coming to the PlayBook upon release.

The PlayBook will be available sometime in early 2011, for an undisclosed price. Remember, BlackBerry not only competes effectively with the iPhone, in North America, it downright beats it, and always has. So don’t count this tablet out–BlackBerry could well have a hit on their hands.