182,000 Indians clean sewers largely by hand. These robots could help.

To transform manholes into robo-holes, the country must seek broader social change. 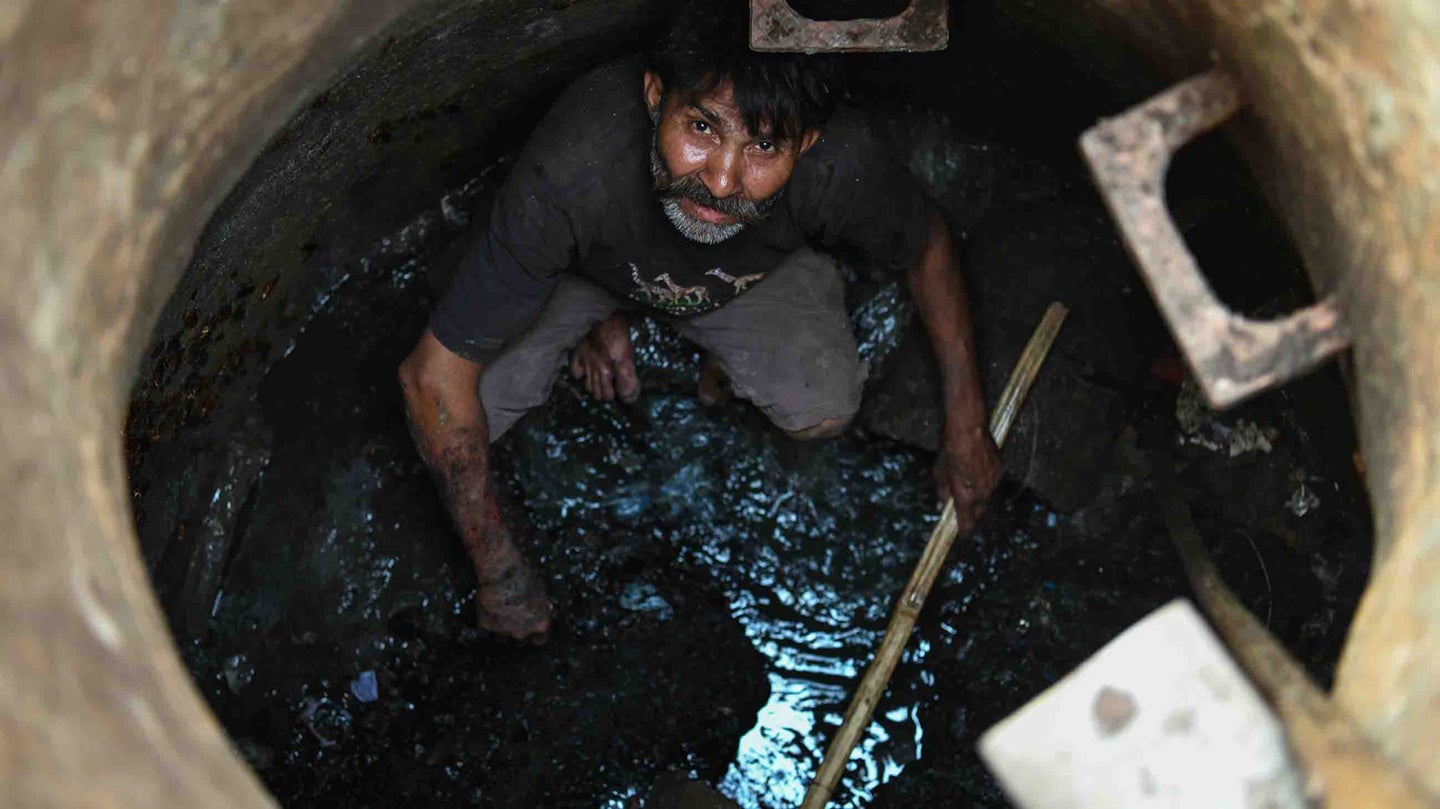 The Indian government defines a “manual scavenger” as a person who physically carries human excreta. Often without safety gear—no helmets, masks, or gloves—these workers plumb the manholes of Mumbai, waist-deep in grey silt and sludge, searching for sewer-clogging debris: feces, sanitary pads, hospital refuse, plastic bags, and tree roots. With buckets full and fumes threatening to overtake them, they exit for a few moments, and then descend again. For their service, and if they are lucky, the city might pay them a monthly salary of about 14,500 rupees, or roughly $200.

Manual scavenging is technically illegal in India, but in practice it thrives across the country. The 2011 Socioeconomic and Caste Census estimates that more than 182,000 Indians work as manual scavengers, while human rights groups peg the number at 770,000. Milind Ranade, founder Kachra Vahatuk Shramik Sangh, a Mumbai-based organization focused on addressing labor issues—especially those pertaining to waste collectors—says that manual scavenging is a caste-based profession, largely limited to the Dalit community, which is considered as the lowest echelon of the Indian society.

In some cases, “the ancient caste system still dictates a person’s occupation in India, and for Dalits, it means a life of dehumanizing work as manual scavengers,” says Ranade. Historically known as “untouchables” or outcasts, Ranade says, “even the state does not care about them.”

In response to such indifference, the country’s Supreme Court has called on the government to step up enforcement, calling manual scavenging both uncivilized and inhuman. “Why are you not providing them masks and oxygen cylinders?” the court asked Attorney General Kottayan Katankot Venugopal on Wednesday. “In no country in the world, people are sent to gas chambers to die.”

While the practice continues, some researchers and companies are busy building solutions that might well displace manual scavengers: sewer robots and other technological solutions that can sweep out debris and keep tunnels clear. In July 2018, the Indian government launched a “Technology Challenge”, inviting innovators to devise additional technology-based alternatives to this noxious work.

So far, the technology is expensive and has had limited reach — and it also does little to address the injustices ingrained in India’s rigid caste system. But for many stakeholders, these sorts of technological interventions can’t come soon enough: Deaths due to suffocation, drowning in turgid waters, and oxygen depletion are a common occurrence in the profession. According to official figures, one manual scavenger died in India every five days between January 2017 and September 2018. Meanwhile, data from Safai Karmachari Andolan (SKA), a nationwide movement to eradicate manual scavenging, states that at least 1,790 manual scavengers died at work between 2010 and mid-2019.

Sanitation workers are also prone to skin and respiratory tract infections, tuberculosis, malaria, and dengue, among other illnesses. “Eight years of manual scavenging have left me with fungal infections on my hands and legs,” said one worker who asked not to be named because previous press coverage of sewer workers resulted in loss of work. “But the government has provided no medical help or financial assistance to cure the ailment. Requests for protective gear and proper equipment have fallen on deaf ears—even as deaths of manual scavengers are reported regularly in India.”

Sunil Bhosale, vice president of the Jan Jagruti Foundation—a non-governmental organization (NGO) that works to address health issues among sanitation workers in Mumbai—shares that the job also leads to chronic alcoholism and resultant illnesses. He cites the example of Mallesh Albai, a 38-year-old manual scavenger, who had been cleaning sewers on contract for six years, and died after suffering from liver enlargement, unable to afford the medical expenses.

Shaileshkumar Darokar, a social scientist with the Mumbai-based Tata Institute of Social Sciences, studies urban sanitation and solid waste management. He noted in an article last year that in a technology-driven world, where India aspires to become a super power, “it is shameful that we still ask fellow humans to descend into manholes.”

“We can bring in technology and employ the same workers to handle the machines,” Darokar says. “No civilized society should allow such a practice. Fifth and sixth generations of Dalit families are still employed in the profession—a perfect example of how caste continues to perpetuate discrimination and ostracization in India. Technology has to become the alternative.”

Ending the practice of manual scavenging won’t be easy. The profession is deeply rooted in the Indian caste system, which dates back 2,000 years. The system, for centuries, has dictated aspects of the Hindu social, professional, and religious life, pushing Dalits to cleaning manholes and sewers—even as the Constitution of India, adopted in 1949, prohibits caste-based discrimination.

India has also enacted two laws to eradicate the practice—the 1993 Employment of Manual Scavenging and Construction of Dry Latrines (Prohibition) Act and the 2013 Prohibition of Employment as Manual Scavengers and their Rehabilitation Act.

But the profession continues. Raj Valmiki, a project coordinator with SKA, says the reason lies in the lack of political will to end the practice. He points to the 1993 law, which has a provision that anyone who employs a man or woman as a manual scavenger can be punished with a jail term of up to one year. Still, despite violations, says Valmiki, no one has been held accountable for the offense in the past 26 years.

“It’s not that the profession doesn’t exist, it’s just that it’s conveniently ignored to suit the society’s needs,” says Valmiki. “As for Dalits, who do the job—most of them are uneducated, unaware of legal dogmas. Generations of their families have done the same work, and they hold little hope for careers other than this denigrating profession.”

Shubham Gaikwad, 21, was an 11-year-old boy when he lost his father, Bharat to manual scavenging. Having lost his mother when he was younger, he grew up in a Mumbai slum with his grandmother and a younger sister—his education funded by local NGOs, other expenses footed by irregular monthly donations of 700 rupees ($10) from his father’s co-workers. While growing up, he had heard from his paternal aunt that his father’s job led to tuberculosis and claimed his life. Gaikwad studied harder to evade the hereditary profession.

“I don’t wish to be a manual scavenger,” says Gaikwad, who recently graduated from college, and is now looking for a job. “But if I have to, I’ll do it. Like my father, I have little choice.”

Another reason for the existence of manual scavenging, says Valmiki, is the usage of dry latrines in India. According to the 2011 House-listing and Housing Census, India has 2.6 million such “insanitary” latrines, which require human excreta to be cleaned or handled manually from open drains, where the waste is discharged before it decomposes. According to the 2013 Act, the local authority is responsible for identifying dry latrines, and demolishing and converting them into sanitary ones.

“But the government is not inclined to implement its own laws,” says Valmiki.

It has been more than 25 years since India outlawed manual scavenging, and six years since the latest legislation stated that it is the “duty of every local authority and other agency to use appropriate technological appliances for cleaning of sewers, septic tanks, and other spaces within their control.” But it is only now that the first technological innovations are emerging. In March 2019, the Delhi government deployed 200 mechanized systems, which were provided to skilled manual scavengers in a bid to end the practice, and turn sanitation workers into “sani-entrepreneurs.”

Bandicoot, for example, is a 110-pound sewer robot with a robotic arm with 360-degree motion, which plucks out solid waste and collects it in a bucket. It has an attachable water jet, which clears sewage blockages while a camera enables operators to see footage of the manhole from inside.

“Bandicoot finishes work, which usually takes two hours and at least three manual scavengers, in 20 minutes,” says Arun George, one of Bandicoot’s designers and co-founder of GenRobotic Innovations, which developed the machine in 2015. So far, the company has 25 of the robots in seven Indian states. “Our aim is to transform manholes into robo-holes,” adds George.

Like Bandicoot, Sewer Croc, named after its reptilian look, is another such tech-based solution: the machine maneuvers sewer lines on spring-loaded Teflon wheels and uses using its cutting blades and high-velocity water jet to cut through debris.

Valmiki supports the move toward these machines. “The use of technology for cleaning sewers is still in its nascent stages in India, and the long-term ramifications will be known with time. But it is certainly a respectable starting point since it is aimed at saving lives,” he says. “We have been suggesting tech-based innovators to train the same manual scavengers in handling their machines so there is no loss of livelihood.”

Reactions to tech-based innovations have been mixed. While rights groups do welcome the solutions, many activists say technology alone can’t rid India of the practice. They call for a rehabilitation plan for sanitation workers—should robots replace them—and also for long-term, sustainable social change, which ensures that no person, regardless of their caste, is coaxed to manually clean the sewers.

Vijay Dalvi, a Mumbai-based activist who advocates for the welfare of sanitation workers, feels that the advancement of technology is already belated, and that the Indian government must first acknowledge the existing victims of the profession. “In the past three years, 265 manual scavengers have died in Mumbai alone —either on the job, or due to illnesses contracted because of their jobs,” he says. “Not one of their families has been compensated so far—despite petitions, prayers, and recurrent follow-ups.” Dalvi adds that while he supports the introduction of new technology to avoid accidental deaths, it must not lead to unemployment or the denial of work to existing manual scavengers.

Other rights activists add that technology needs to be accompanied with a strong rehabilitation and compensation plan. Ranade points to rehabilitation provisions outlined in the 2013 Act, which grant manual scavengers a one-time cash assistance, financial help for house construction, legal and pragmatic assistance, training in a livelihood skill, as well as a concessional loan for taking up an alternative occupation on a sustainable basis.

There needs to be awareness about these rights-based state-sanctioned provisions, Ranade says. He adds that manual scavenging is an epitome of social injustice, and the profession will persist until the problem of caste-based discrimination is addressed.

“If Dalits quit scavenging, how will they afford a life? Even today, the community is expected to clean feces—even as members of other castes would prefer unemployment over this humiliating work,” says Ranade. “There are cases where Dalits have set up grocery shops in villages, and no one has come to their stores since they’re untouchables. Their freedom, even if it arrives through technology, has to be sustainable.”

Puja Changoiwala is an award-winning independent journalist and author based in Mumbai. She writes about the intersections of gender, crime, human rights, social justice, and development in India.