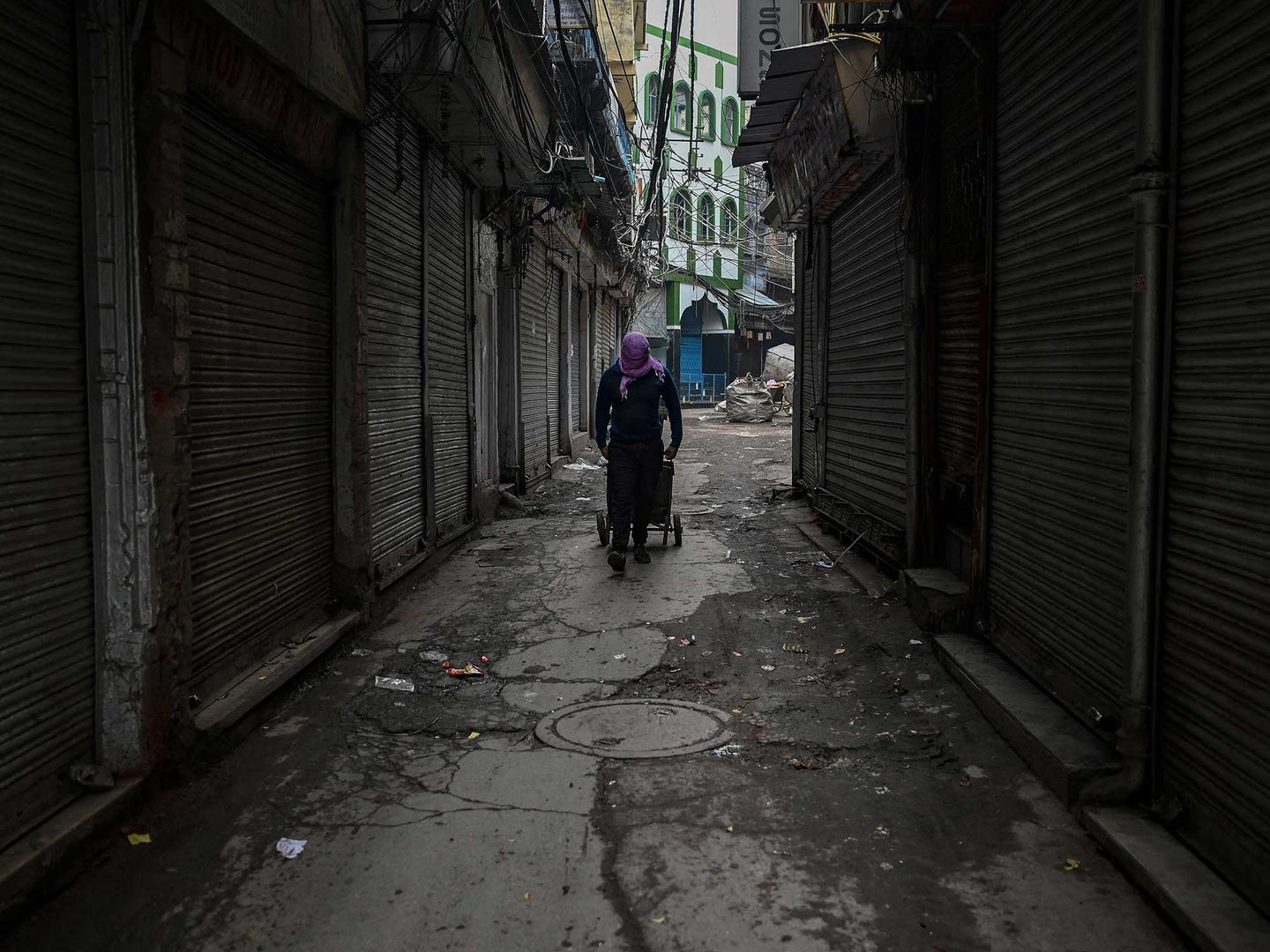 Munesh sits by the roadside near a crowded market in Chandigarh, a city in India’s north, on a January day. She is flanked by several other women, all of them sweepers hired by the Chandigarh Municipal Corporation. She shows the smartwatch she is wearing and says, “See, I didn’t even touch it, but the camera has turned on.”

Munesh, who estimates she is in her 40s and, like many Indians, goes by just one name, is one of around 4,000 such sanitation workers. The corporation makes it mandatory for them to wear smartwatches—called Human Efficiency Tracking Systems—fitted with GPS trackers. Each one has a microphone, a SIM embedded for calling workers, and a camera, so that the workers can send photos to their supervisors as proof of attendance. In Chandigarh, this project is run by Imtac India, an IT services company, at a cost of an estimated $278,000 per year. Meanwhile, sanitation workers say that the government has not invested in personal protective gear throughout the Covid-19 pandemic, and that they have long worked without medical care and other vital social services.

From the time the sanitation workers turn on their watches until they turn them off, their GPS locations are monitored in real time by officials at the Command and Control Center of the Chandigarh Municipal Corporation. The workers appear as green dots on a computer screen and as they move around in their assigned areas, the green dot moves along a line.

The camera fitted on the tracker is what scares Munesh and many other sanitation workers, who mostly come from the Dalit community or other Hindu lower castes. (In the Indian subcontinent, the caste system has long categorized and limited people’s education and work prospects; the job of cleaning or sanitation has always been linked to the lower castes.) Wearing the tracker is mandatory. According to Krishan Kumar Chadha, the former president of the Chandigarh Sanitation Workers’ Union, taking it off incurs a fine of half a day’s salary, around $3 to $4, although Abhay Khare of Imtac India denies there is such a fine. Workers also have to take the devices home. They worry about privacy leaks and the inability to turn off the trackers and cameras—even when they are in the bathroom.

One of the flagship programs of Indian Prime Minister Narendra Modi is to bring “digital innovations” to the country. Under this Digital India initiative, Modi has been pushing for cashless or digital transactions, digital attendance, and surveillance systems, like the one in place for the sanitation workers. This digital attendance and tracking system is also part of another much-hyped campaign of the government: the Clean India Mission, also known as Swachh Bharat Abhiyan, which launched in October 2014 with the goal of a clean and sanitary India.

These systems come with incentives for the municipalities. Civic bodies with a digital attendance system earn extra points toward an annual list of the country’s “cleanest” cities, an honor that gives them bragging rights. This online surveillance of sanitation workers is currently operational in more than a dozen cities, including Indore, Nagpur, Navi Mumbai, Panchkula, Thane, and Mysuru.

The Chandigarh Municipal Corporation introduced GPS-enabled smartwatches for its sanitation workers in 2019. The government says that the tracking devices bring transparency into the attendance system and prevent workers from allowing someone else to sub in for them.

But the workers have been protesting ever since, arguing that the watches violate their privacy and rights. For her part, Munesh says, “it’s like an iron shackle around our necks.”

In August 2017, the Supreme Court of India, through a judgment, recognized privacy as a fundamental right.

“Among basic rights conferred on individuals by the Constitution as a shield against excesses by the State, some rights are at the core of human existence,” the top court said in its judgment. “Thus, they are granted the status of fundamental, inalienable rights essential to enjoy liberty. Liberty is the freedom of an individual to do what he pleases and the exercise of that freedom would be meaningless in the absence of privacy.”

In 2018, a 10-member committee, headed by a retired Supreme Court judge, submitted a comprehensive report on data protection. The committee also suggested a draft data protection bill; a revised version is still pending before a Joint Parliamentary Committee and could be scrapped in favor of new data privacy legislation.

When it comes to surveillance of sanitation workers, “the Constitution does not allow this kind of a thing,” says Pavan Duggal, a cyberlaw consultant and advocate for the Supreme Court of India. As such, Duggal argues, the sanitation tracking system violates workers’ right to privacy.

Although a law passed in 2000 called the Indian Information and Technology Act does allow digital surveillance or interception of citizens under certain circumstances, Duggal adds, the sanitation trackers amount to “crystal clear illegal interception.”

A 29-year-old cleaner named Neerjo didn’t know that officials at the Command Center can trace the location of her house through the tracker until her interviews with Undark. She was taken aback. “We did not know this,” she says and looks at her co-workers in surprise. “We have never been told anything about the watch.” Undark repeatedly contacted Chandigarh Municipal Corporation Commissioner Anindita Mitra to verify this and other details about the smartwatch program; the calls and emails went unanswered.

Still, Abhay Khare, business head of Imtac India—a distribution partner of ITI Limited in Chandigarh—insists that the GPS trackers are not breaking laws, and that they follow all the parameters of data safety and privacy. He adds that the devices are also used for government security, “so the ITI Limited is very careful about these parameters.”

Before he left his position as project coordinator of Chandigarh’s human efficiency tracking system program, Suraj Kumar also told Undark that on the smartwatches, neither the microphone nor the camera can be controlled remotely, which means that no one in the control center can turn them on.

But that does not assuage the fears of the sanitation workers, particularly women. Many say they avoid using the bathroom while on duty. Others put the smartwatches in purses or pockets beforehand—because, says a worker named Mithlesh, “sometimes we go to [the] washroom and the camera turns on automatically, causing problems.” Around a dozen women who spoke to Undark shared the same concern.

And even though the officials at the CMC stress that the data of sanitation workers are secured and deleted after three months, the workers also complain they often receive spam calls on their smartwatches. “One night, I was awoken by a call on my smartwatch around 11:30 [p.m.],” says one worker, Shakuntala. “I picked it up and some man was asking me who I was. I hung up, knowing it was an unknown number and not someone from my office. How did he get my number if the SIM was given by the Corporation?”

Khare says the GPS trackers do not allow unwanted calls. “It’s impossible they would get spam calls,” he says, adding he had checked it himself.

The workers say the tracking device invades their personal lives. They are required to charge GPS devices at home each night, to make sure the watches remain on during working hours the next day. If the watch is off, the workers are marked absent, risking their wages. According to Chadha of the Chandigarh Sanitation Workers’ Union, the fine for losing the tracker ranges from around $107 to $134, almost their month’s salary.

Taking these devices home aggravates the problems, says Shakuntala. “When I am around the watch, I get conscious,” she adds.

In each part of the city, a supervisor looks after a team of sanitation workers and marks their attendance. A supervisor named Satyapal Singh tells Undark that if a worker’s watch turns off or shows them outside the area where they should be working, even if they are marked present on the register, they don’t get paid.

Pradeep, who drives a sewage truck, says he once got a call from his supervisor, inquiring why he was absent for a week. Although he had been at work, at the Command Center, he was marked inactive. It took Pradeep a few days to prove that he was on duty, he says: “My salary would have been slashed otherwise.”

A few days before India’s Republic Day in January 2022, Chadha, the former president of the Chandigarh Sanitation Workers’ Union and a current senior member, sits in his office, a makeshift tin shed, outside a bustling market near the Municipal Corporation office. He sits with workers as they talk about the cleanliness preparation ahead of the special occasion.

But he also stresses the union’s presence at an upcoming protest against the tracking devices.

He breaks his conversation with a worker and points towards his smartwatch: “What is this watch?” he asks and leans forward. Then he pauses and sinks in his chair and answers himself, “It is a handcuff that enslaves poor workers.” Chadha draws reference from ancient times, saying it is akin to the times when lower castes were physically chained and forced to do menial jobs.

Khare of IMTAC India boasts of the increased productivity the tracking system has achieved. He says that some local governments using the smartwatches to track field workers have detected employees farming out their work to other people, and that it has been able to save a huge amount of state expenditure.

But the workers complain not only of surveillance, but poor working conditions. At the height of the Covid-19 pandemic, doctors and other health workers in India sometimes faced discrimination and harassment for working with infected patients. But they were also called “frontline warriors” and promised medical insurance. The sanitation workers, who were out on roads, keeping the cities clean, say they have not received adequate personal protection equipment during the pandemic. In a June 2020 independent survey of 214 sanitation workers in several Indian states and metropolitan areas, 56 percent said they weren’t given any Covid-19 safety instructions or training. (Twenty-six of those surveyed did not answer this question.)

Even before the Covid-19 pandemic, the sanitation workers say, they were never provided with any safety or protection gear. They also say they are not given any paid leave, medical treatment, or insurance.

Bezwada Wilson, National Convener of Safai Karmachari Andolan—a human rights organization pushing to end manual scavenging, a traditional practice reserved for Indians from Scheduled Castes—says the surveillance, which he calls illegal, is dehumanizing. It reinforces the idea of slavery, he adds, and stems from the casteist mindset.

“It’s modern-day slavery,” he said, adding that India’s “dominant” castes “still see the sanitation workers as untouchables. As if that was not enough, this tracking device has only reinforced that idea.”

Before her lunch break ends, Munesh asks for help with checking how many steps she has walked so far that day. Since her shift started at 7 a.m., her tracker shows she has walked 2,231 steps in the first half of her shift. There are four more hours to go, and one of her coworkers says they cannot afford breaks. Even if they finish their jobs early, they should appear in motion on the screen.

As soon as her lunch break ends, Munesh prepares to leave. She picks up a broom, walks away towards a bustling market, and bends to sweep the litter.