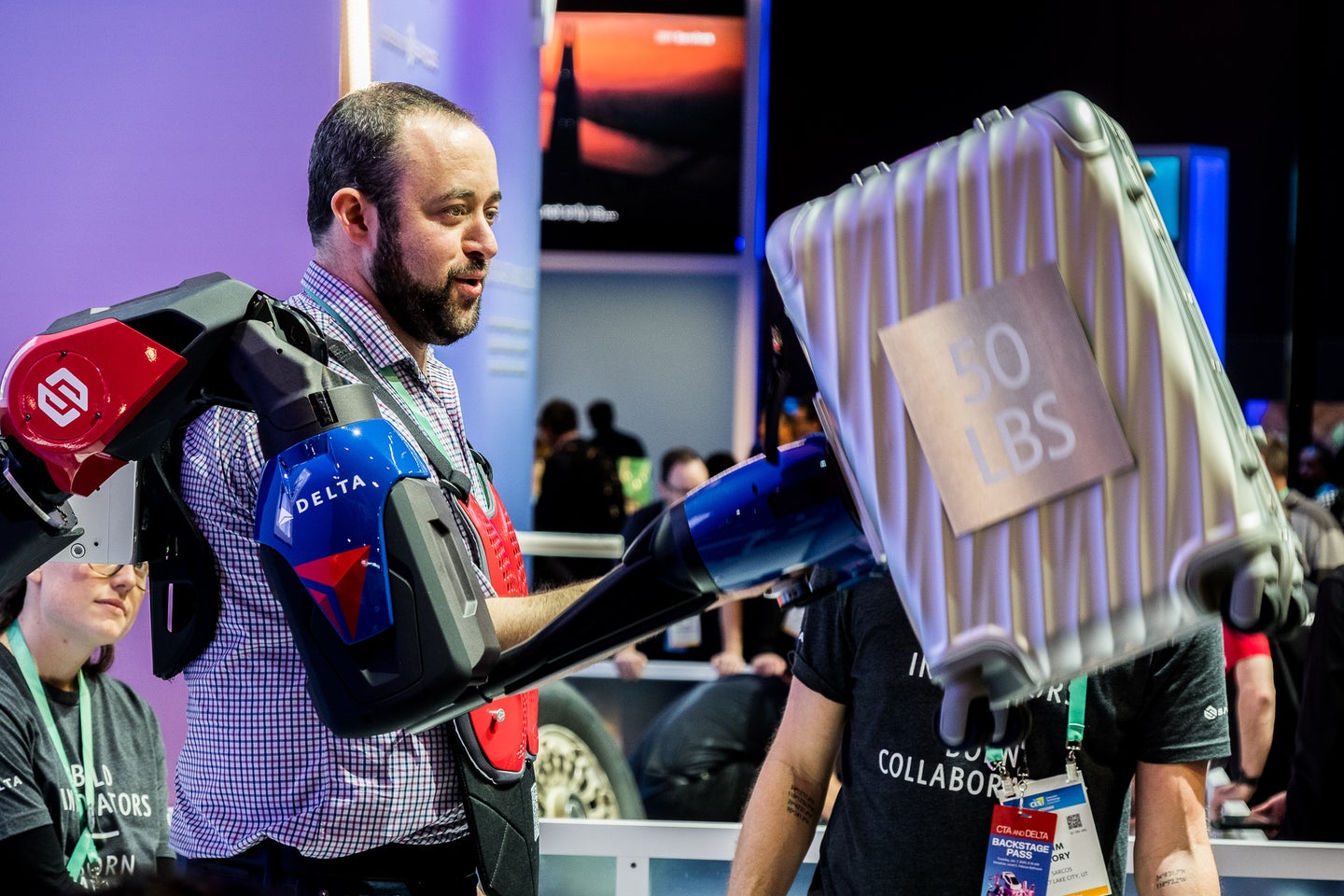 Forklifts and remote-controlled robots are great for brute force power. They can easily lift 200-pound objects, but that strength typically comes at the cost of dexterity. Utah-based robotics company Sarcos, however, wants to put the humans inside the machines to handle the heavy lifting and the delicate details of industrial work all at once.

The company showed off the alpha version of its Guardian XO exoskeleton earlier this year at CES. It’s part of a collaboration with Delta Air Lines, which has started testing the suit starting in the Q1 of 2020. According to Sarcos, other private companies and government entities have started doing the same and it plans on using feedback from those trial runs to enter commercial production in Q4.

The Guardian XO has come a long way. “It was originally funded by the Defense Advanced Research Projects Agency in 2000,” says Sarcos’ chairman and CEO, Ben Wolff. “They wanted solutions to allow soldiers to carry more weight on their backs. Soldiers were carrying 100 pounds on their backs and walking for up to eight hours.”

According to Sarcos, the first prototypes produced in the early 2000s were hydraulic, which required bulky equipment and tons of power. “The first prototype used around 6,800 watts of power per hour,” says Wolff That’s a massive amount of energy. In 10 years the company cut that number in half, but as the necessary parts got smaller and more efficient, the Guardian XO switched from hydraulics to electric operation. Thanks to those changes, the XO now uses roughly 500 watts per hour, even when it’s moving at full speed and carrying a heavy load. Operators can hot swap rechargeable batteries on the fly for constant operation, then charge the entire unit in its dock at the end of the day, like any gadget.

The version debuted at CES can lift up to 200 pounds, and I saw several attendees lift up suitcases weighing more than 50 pounds in the Delta demo area with ease. As the wearer walks, the machinery moves as well, reaching a maximum speed of up to 3 mph. It’s not meant to give the wearer super-human strength in that they could lift up something typically requiring a forklift, but rather pick up and easily manipulate something orders of magnitude bigger than what they could normally handle with their own flesh-and-blood bodies.

In addition to the lifting equipment, the XO also carries around roughly three servers worth of computing power to help capture and analyze the data acquired by the suit’s 125 onboard sensors. “We can track just about every moving part in the suit in real-time,” says Wolff. In future versions, it plans to add more sensors that gather information about the operating environment as well as technical diagnostic info.

With a person inside the suit, monitoring their environment is that much more crucial. After all, a remotely controlled bot doesn’t necessarily care much about bad air quality. But according to Sarcos and its customers, there’s a benefit to having a human in the mix. It removes a layer of abstraction, and increases reaction times. “We humans can appreciate the surroundings and environment of the task,” says Wolff. “Your judgment and response time will be quickest if you’re right there with it.”

While the XOs that go into production later this year will ship to industrial clients, the company is currently entertaining possibilities for future versions. Rather than focusing on ways to make the machines bigger and more powerful, it’s actually thinking smaller. “Not every task requires lifting 200 pounds,” says Wolff. “Maybe a suit only needs to lift 100 pounds. It could be much lighter and more efficient on power.” Possibly, down the road, a personal model for average folks doesn’t seem out of the question, especially as the components and batteries shrink.

Other companies like Samsung have shown off more targeted exoskeleton solutions for specific parts of the body, including its walking assist exoskeleton legs that help the wearer during normal ambling around. For now, Sarcos is focused on taking the full-body solutions as far as it possibly can for commercial customers. But, one day, maybe it will make shoveling your driveway a whole lot easier.