What IUDs are, how they work, and why you might want to get one

For women uneasy about the future of healthcare, IUDs are an obvious choice 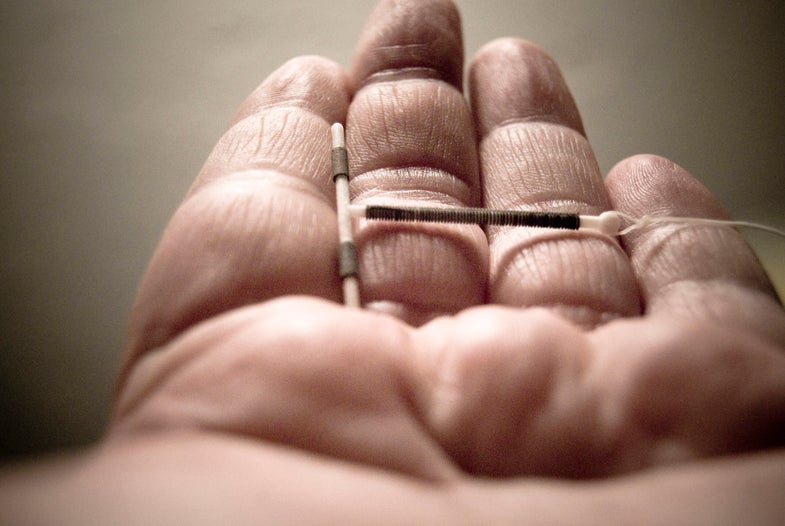 ABC reports that Google searches for “IUD”, “IUD Trump,” and “get an IUD now” have spiked sharply in the wake of the 2016 election results. In case you’re only vaguely aware of why such a thing might occur—or if those three little letters leave you totally perplexed—here’s a brief rundown on what these tiny devices are, how they work, and why you might want to consider getting one ASAP.

Basically anyone who has a uterus and doesn’t want a baby in it right now is a good candidate for IUD use. The tiny, T-shaped devices can be made with and without hormones, lasting around 5 to 12 years, respectively. They’re already the most common form of reversible contraception used worldwide, but it was only recently that the American Congress of Obstetricians and Gynecologists officially recommended them as primary contraception for most women, including adolescents who are just becoming sexually active. Their popularity in North America is on the rise, but they’re still much more common in Asian, European, and African nations. (This is largely because the U.S. market released a disastrous and dangerous IUD back in 1971, damaging public perception of the devices.)

While most methods of birth control have much higher failure rates than they “should”—the pill, for example, is more than 99 percent effective at preventing pregnancy in theory, but has something like a 9 percent failure rate in the real world because of late and forgotten doses—an IUD maintains its >99 percent effectiveness unless it falls out, which isn’t very common.

IUDs aren’t perfect, and they aren’t for everyone (more on that later). But if you’re willing and able to use an IUD, this set-it-and-forget-it method of birth control puts reproductive control in your hands for years at a time—no matter how policies change around you.

It will almost certainly be harder to get birth control in 2017, and IUDs may all but disappear as an option

Donald Trump has not shown himself to be the greatest advocate for women’s healthcare. His comments about “9th month” abortions—which simply don’t exist, according to numerous medical professionals—and his promises to defund Planned Parenthood and cut off access suggest he will take a hard anti-abortion stance while in office. It seems highly unlikely that his running mate will push back to keep women’s healthcare accessible.

The president-elect has also announced his intention to do away with the Affordable Care Act. The ACA made women’s health visits and birth control free for anyone with insurance. It’s not clear how Trumpcare will deal with birth control broadly, but it would be surprising if IUDs stayed in the clear.

For starters, they’re expensive: An IUD and its insertion can cost hundreds of dollars up front, and without the ACA in place they may be too expensive for exactly the people who most need a safe and reliable way to avoid pregnancy. And one cannot assume that the devices will remain available in the U.S. at all: Trump has ties with the anti-abortion nonprofit Susan B. Anthony List, a group that considers some IUDs to be instruments of abortion.

No. Not even a little bit. IUDs are birth control.

Here’s how they work: Mirena, Liletta, Kyleena, and Skyla are all hormonal IUDs. They release small amounts of progestin, a hormone very similar to the naturally occurring progesterone and one that’s found in many versions of “the pill”. Because they sit directly in the uterus, these devices only need emit small doses of progestin to create the desired effects; preventing the release of eggs in some cases and thickening cervical mucus to block sperm from fertilizing any eggs that make it out. In other words, it’s pretty much exactly like taking a birth control pill every day—but you don’t have to pick up a new prescription each month or remember to take a pill. These IUDs are all slightly different sizes, lasting from three to six years depending on the brand.

ParaGard is a little different—it’s totally non-hormonal. It gets its punch from copper, which is wrapped all around the tiny device. Copper is toxic to sperm, so it kills any potential fertilizers before they can reach the egg. But while ParaGard is just as effective as Mirena and the like, it’s a lot more mysterious. Doctors know that ParaGard can be used as emergency contraception, meaning that if it’s inserted a few days after unprotected sex it is highly unlikely that a pregnancy will occur. Is this because of ParaGard’s spermicidal properties, or does the IUD actually keep eggs that have already been fertilized from implanting and growing into fetuses? For some anti-abortion activists, keeping a fertilized egg cell from implanting is not a risk worth taking.

Look, IUDs aren’t perfect: While the rate of failure is low (and the rate of a painful outcome is even lower), the IUD, like any medical device, is going to make some people sick or miserable. It’s not unheard of for an IUD to perforate a uterus, especially in women who haven’t given birth before, and some women are more likely to get painful or dangerous ovarian cysts while using an IUD. Things can go very wrong. And even if they don’t, you might not like the symptoms: The symptoms of Mirena and other hormonal IUDs are largely the same as any hormonal pill you might take, but ParaGard is known to cause heavier periods and more severe cramping in many users.

Like it or not, we’ve got a long way to go in making birth control as safe, painless, and accessible as it should be. But with potential changes to healthcare access and women’s reproductive rights on the horizon, it’s worth talking to your doctor about IUDs while the getting is still good.