Why Do We Care About Periods In Space?

Scientists should be worried about bigger issues facing space colonization 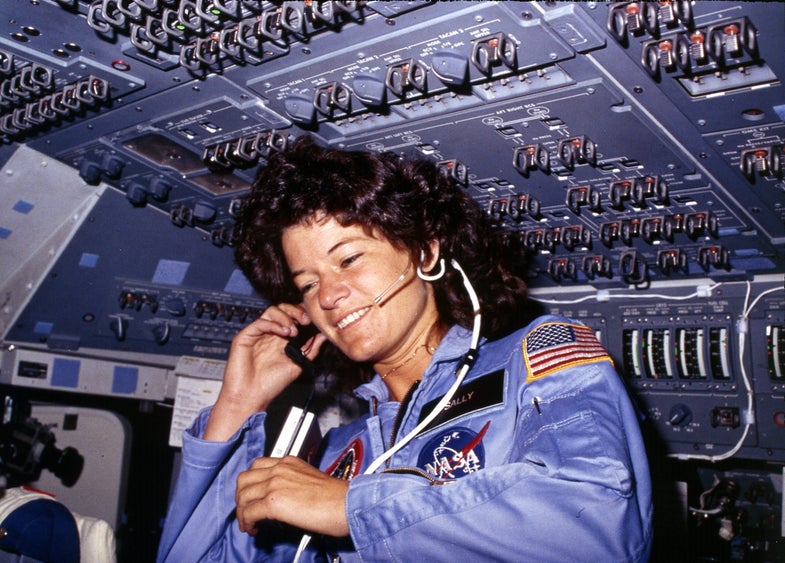 There’s a fraught history of men fretting about menstruating women in space. In the 1960s, during the early days of the space program, it was one of the main arguments against female astronauts, according to NPR—hormonal women shouldn’t operate complex machinery, outgoing period blood could flow back up the fallopian tubes and cause health problems. When the ladies finally won out and were finally sent into space (everything was fine with their periods, by the way), the people planning the space missions still didn’t “get it”; Sally Ride, the first American woman in space in 1983, was reportedly given 100 tampons for seven days in space. In recent years, female astronauts have taken hormonal birth control to prevent menstruation during space flights and training.

But as NASA and private space companies plan to send humans on years-long missions to Mars and beyond, scientists have started thinking about the possible side effects of hormonal contraceptives. A study, published today in the journal Microgravity, surveys the different birth control methods to assess which might be best for women colonizing the cosmos.

It’s not practical to bring oral contraceptives into space, the study authors suggest—for a three-year space mission, astronauts would have to bring more than 1,000 pills per person, with packaging that “would add mass and disposal requirements for the flight,” according to the press release (maybe it’s relevant that women are generally physically smaller than men, so they add less mass to the flight, anyway).

The researchers suggest that long-acting reversible birth control, like a sub-dermal implant or an intrauterine device (IUD), might be a better choice for an extended space flight. The researchers assure the reader that the powerful forces that astronauts feel during launch and landing don’t shift an implant, though “consideration may need to be given as to whether the implant could rub or catch on specialist equipment or attire such as a diving suit or extra-vehicular activity suit,” according to the press release.

“Studies of women in the military have shown that many would like to suppress their menstrual flow during deployment, but only a proportion of them use the pill to do so; the majority of women surveyed also wanted more advice from the military to help them make the right choice,” Varsha Jain, an OB/GYN and researcher at King’s College London, said in the press release.

On a long mission, like one to Mars, women probably wouldn’t have much individual choice about whether or not they want to take birth control. Yes, no one would want a woman to get pregnant in space, including women (though space sex is a whole different challenge). And packing all the tampons you would need for three years is probably not a great use of the limited room on a spacecraft. But overall these are shockingly small concerns for missions that have so many uncertain details, like: Where will we live, what will we eat, and what will happen if we run out of medicine?

The study authors do make a good point, though. There are health concerns associated with hormonal birth control—it’s known to have an effect on bone density, which declines faster in space and can be irreversible. Before sending women into space with three years’ worth of hormonal birth control, more research needs to be done to assess the long-term impacts of those drugs on women’s health under the specific conditions astronauts will encounter in space.