Why Are Tornadoes So Hard To Predict?

People in the path of a tornado typically get only 10 minutes of warning. Why? 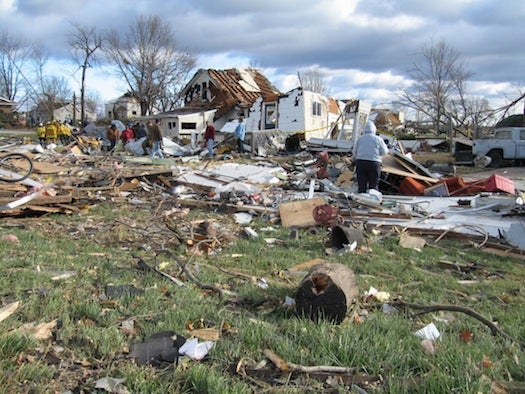 Sixteen minutes before a tornado touched down in Newcastle, Okla., yesterday, the U.S. Storm Prediction Center sent a warning to the area. That heads-up was longer than the average warning time of 8 to 10 minutes.

Why are tornado predictions so short-term, especially compared to other predictions we’re familiar with, such as weather forecasts or hurricane warnings?

Hurricanes and blizzards show up on satellites days beforehand, but the conditions that favor tornados appear much more quickly and unexpectedly, the Associated Press reported in 2011. Tornadoes are just made of much finer print, so to speak. Their paths are smaller and they last for shorter periods of time, so predicting any particular tornado requires a fine-grain understanding that’s more difficult for scientists.

Instead, the Storm Prediction Center issues tornado watches hours ahead of time that cover very broad areas. In 2011, the Associated Press reported on a watch that included 14 states.

The Storm Prediction Center looks for patterns in temperature and wind flow that create certain levels of moisture, instability, lift and wind shear, according to the center’s extensive frequently asked questions page. Even then, its predictions may be uncertain because tornado conditions don’t always look the same. A number of different scenarios can result in tornados, while similar scenarios may not always produce tornados. Slight changes that meteorologists can’t currently measure may tip a thunderstorm to form a tornado—or not, Storm Prediction Center warning coordinator Greg Carbin told Scientific American in 2011.

Researchers are now working on forecasts that apply to areas smaller than a state, but larger than a county, Garbin said. With future improvements, meteorologists could get about an hour’s warning on tornados, but not much more. Researchers just can’t read the fine print that closely.

Meanwhile, the Storm Prediction Center has a webpage of tornado safety tips, many geared toward the short lead times that people typically have before a twister.