Amazon’s record on climate action is far from perfect, but climate scientists are still hopeful about his new fund. 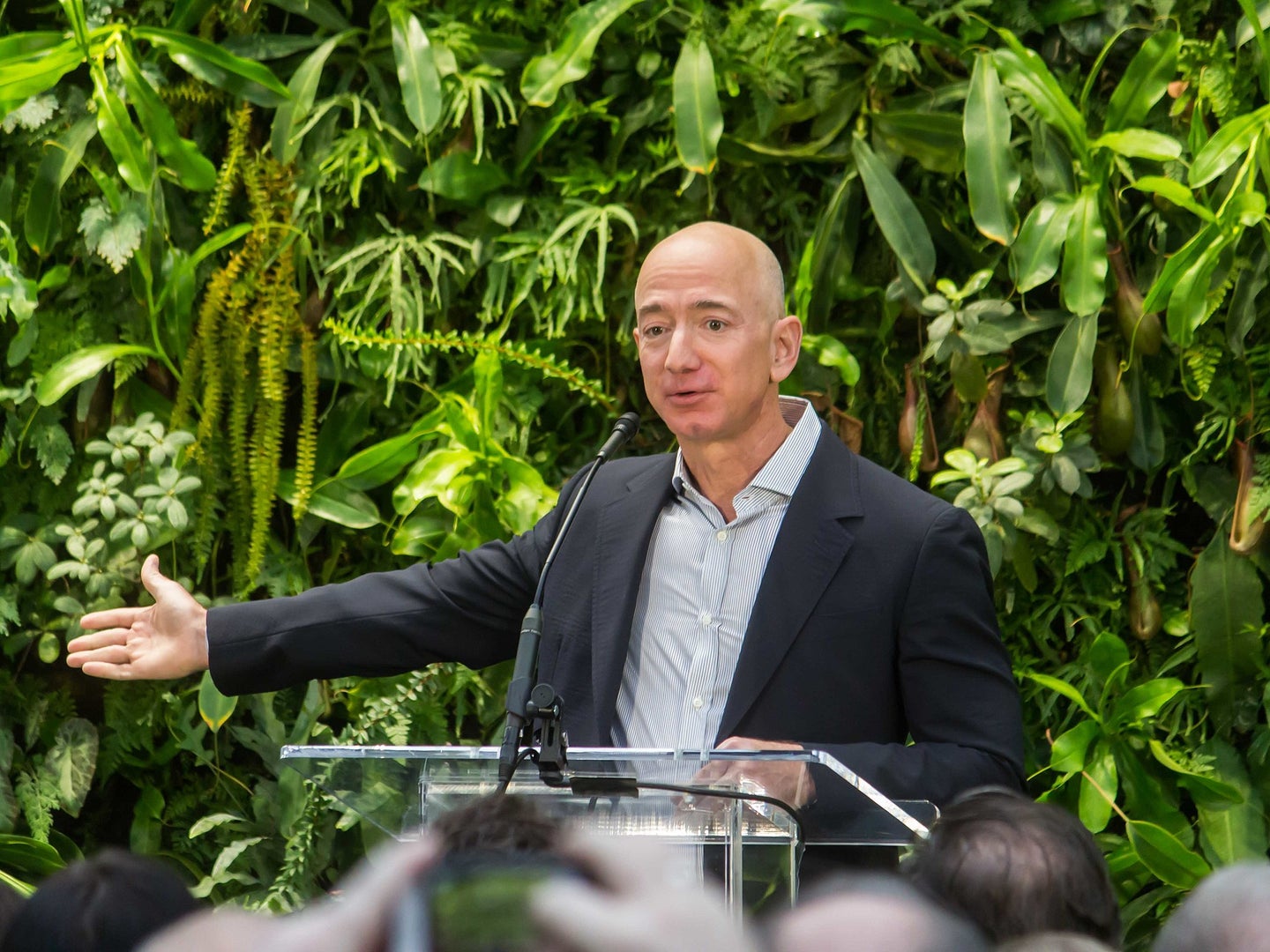 Bezos at the opening of Amazon Spheres in 2018. Seattle City Council
SHARE

On Monday, Amazon CEO Jeff Bezos announced that he was launching a $10 billion dollar fund, the Bezos Earth Fund, to address climate change. “I want to work alongside others both to amplify known ways and to explore new ways of fighting the devastating impact of climate change on this planet we all share,” he wrote in an Instagram post. “This global initiative will fund scientists, activists, NGOs — any effort that offers a real possibility to help preserve and protect the natural world.” Bezos said that he’d start distributing grants this summer.

After initially dragging their feet, Bezos and Amazon seem to be attempting to use their power to address the climate crisis. However, the announcement is scant on details, and the real impact of these changes depends on how that money is spent—and whether Bezos can follow through on plans to clean up his own company.

A group of the company’s own employees, for their part, aren’t totally satisfied. “As history has taught us, true visionaries stand up against entrenched systems, often at great cost to themselves,” wrote the Amazon Employees for Climate Justice in a statement. “We applaud Jeff Bezos’ philanthropy, but one hand cannot give what the other is taking away.” The group went on to mention Amazon’s business of offering cloud computing services to oil and gas companies, their funding of climate-denying think tanks, and how diesel exhaust from their shipping trucks harms the lungs of those living near Amazon warehouses.

Amazon’s climate action to date seems to stem from the organizing of the company’s employees, writes Brian Merchant in a Gizmodo article. In December 2018, workers posted a letter online calling for the company to adopt a climate plan, racking up over 8,000 signatures. After that, Amazon began to announce concrete goals for reducing delivery emissions and switching to clean power. In September 2019, the company unveiled its commitment to reach net zero emissions by 2040, as well as its carbon footprint—a whopping 44.4 million metric tons of CO2-equivalent emissions in 2018.

That’s more than the emissions of some countries, or about the same as a small fossil fuel producer. For comparison, oil company Pioneer has an annual footprint of about 40 million tons, while Exxon’s is 604, explains Richard Heede, co-director of the Climate Accountability Institute, who published an analysis last year on the most polluting fossil fuel companies.

Even so, Heede says he applauds Bezos’ latest commitment. “I thought it was a worthy amount to donate to the world’s most critical issue,” he says. But, he emphasizes, what comes next for climate change largely depends on the fossil fuel industry, since 103 firms are responsible for nearly 70 percent of human-caused greenhouse gas emissions. While business leaders like Bezos have made pledges to cut their industry’s emissions, Heede says “we have to fund systemic changes as well on the supply side [of fossil fuels], which is a much tougher nut to crack than reducing net emissions.”

Climate scientists say that that’s the best use of all that cash—using it as capital for market and political shifts that can uproot our fossil fuel fed status quo. Jonathan Foley, executive director of climate change-focused Project Drawdown, says that investing in energy efficiency and transportation improvements is the low-hanging fruit of climate action. If Bezos, for example, used that money to provide start up capital for the electric heat pump industry, that could foster a huge transition in American homes and businesses, which mostly use polluting natural gas for heating. Buildings represent 40 percent of U.S. energy use, and 35 percent of that goes into heating, cooling, and ventilation. Scaling up an existing, energy-efficient technology like heat pumps could create fast benefits for the planet.

Transportation, which generates more greenhouse gases than any other source in America, also needs a revamp if we’re going to curb the climate crisis. That’s why ramping up electric-powered vehicles and public transit infrastructure would also provide immediate benefits to the planet. “I think energy efficiency, buildings, and transportation are the next frontiers,” says Foley. “I would strongly encourage [Bezos] to spend the money immediately, in the next five years.” With swift action, we might stand a chance of meeting the 50 percent cut in carbon emissions by 2030 we need if we’re to avert the worst consequences of climate change.

Leah Stokes, political scientist at the University of California, Santa Barbara studying environmental policy, also thinks that money could go far for the climate, adding that the total may be more than twice the amount of funding currently out there for tackling climate change. Her suggestion for spending it is to help reshape politics, using donations and campaigns to accelerate policies and candidates that support climate action. “My own view is that we really need to catalyze government policy,” she says. She points to Michael Bloomberg’s donation of tens of millions of dollars to the Sierra Club’s Beyond Coal campaign, which lobbies to stop new coal plants and shut down existing ones. The campaign credits itself with the retirement of 289 coal plants. “Bezos could take a similar approach aimed at changing climate policy,” she says.

Helping seed climate policy through political donations could reap big climate rewards down the line, says Stokes. If some of that $10 billion was used to help pass a carbon tax, for example, it would raise around $200 billion every year. And some Democratic presidential candidates have proposed spending trillions on climate action. “If you can get the federal government to start acting on climate change,” she says. “You can get a lot more than 10 billion for climate action.”

Though the outsized power and influence of billionaires may make us uncomfortable, $10 billion toward the planet is a big deal. “At the end of the day I think the world is better because someone decided to put $10 billion toward climate solutions,” says Foley. “If invested wisely, it could make a big difference.”