Become the colonel of the kitchen. 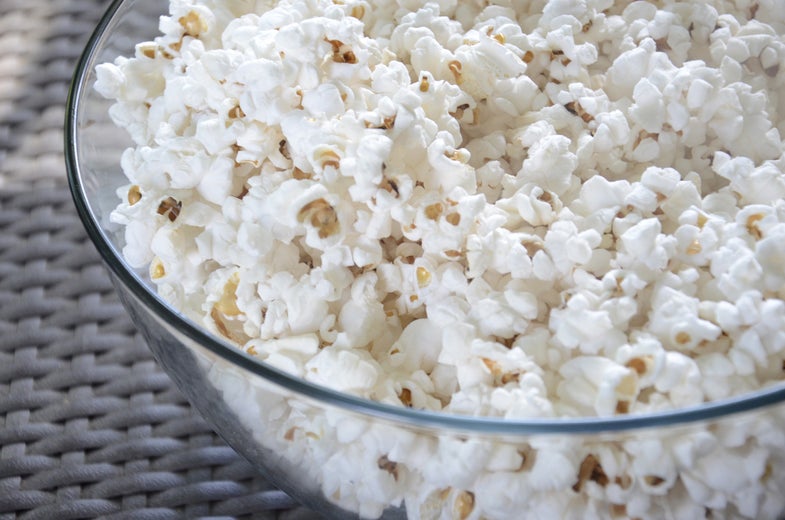 Popcorn is by far my favorite snack food. It’s easy to make, you can dress it up any way you want, and it’s chock full of gut-friendly fiber. But there are still some pitfalls lurking in the popping process: Stray too far from the rule book, and you might end up with burned corn or a sad cluster of unpopped kernels. Neither scenario is ideal, so we’ll help you avoid them.

The mechanism behind popcorn is simple: Kernels are compact yet extremely starchy. When we heat them, the water trapped inside the starch heats up. This generates steam, which creates pressure, which suddenly causes the kernels to burst. Voila, we have popcorn.

While you can read up on a multitude of ways to create popcorn—including fancy popcorn makers, campfire contraptions, and microwavable bags—you don’t need to splash out that extra cash to enjoy this snack. We chose two ways to make popcorn without any fancy contraptions.

I challenge all of you to find an easier (and less messy!) style of popcorn creation. Take a paper bag like the ones in which you once packed your school lunches. Fill its entire bottom layer with kernels. Then fold down the paper bag a few times so that when the kernels start jumping, they don’t explode into your microwave. Finally, place it in the microwave on the popcorn setting. Most microwaves have this button, but if not, follow Orville Redenbacher’s advice and power up your science oven to high for about four minutes.

Bear in mind that those four minutes are the average cooking time, and your specific popcorn needs can vary a lot. A foolproof method is to set the timer for four minutes but stay nearby. As the popping slows, start counting the number of seconds between pops. Once the noise reaches about one pop every two to three seconds, that’s the sweet spot. Keep the heat on any longer and you risk burning all your corn for just a few extra popped kernels.

A microwave’s air-popping is arguably the healthiest way to eat popcorn. But to me, it tastes a bit too airy and downright boring. One way to add flavor is to heat up the kernels in oil. This method allows the flavor of the oil to soak into the kernels as they warm. And it also makes the end result taste a little less like cardboard (in my personal opinion, of course!).

I’ve always used olive oil because I prefer the flavor, and want to enjoy the accompanying health benefits. But you can pop the kernels in almost any kind of fat. Vegetable oil imparts a mild flavor, and if you want an extra boost of flavor and aroma, you can add a little butter to it. However, the animal fat burns at a lower temperature than the oil does, so if you’re cooking with butter, you’ll have to keep a closer eye on your stovetop popcorn.

Start by getting a rather large pot: A too-small vessel will crowd the popcorn, making it a little sticky and moist from all the water vapor it’s emitting. Then fill the bottom of the pot with a thin yet noticeable layer of oil and add a layer of kernels. Cover everything with a lid that has holes to release the steam.

Place the pot on your stove and set it on a medium to high temperature. Just like with the microwaving method, allow the corn to do its thing, occasionally sliding the pot from left to right to get the oil moving. Wait until the sound of kernels popping slows almost to a halt, and then immediately remove from the heat.

One of the best parts of popcorn making is the diversity of toppings you can put on top. You can stick with simple salt, or spice it up by adding pepper and rosemary. You can even grate some parmesan cheese shavings into the mix. Or go the sweet route and sprinkle cinnamon and sugar over your treat. Whatever your preference, taste as you season, and you’ll end up with a delicious snack.