5 Bar Tricks You Can Do With Science 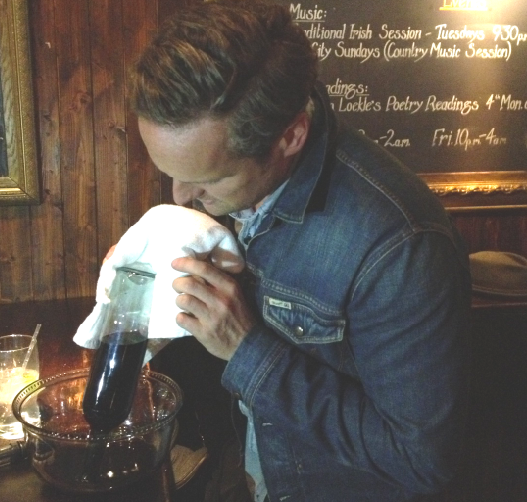 TV presenter Tim Shaw demonstrating a trick wherein a wine bottle is made to suck up wine. Douglas Main
SHARE

As Kurt Vonnegut wrote in his classic Cat’s Cradle, “science is magic that works.” The same can be applied to these seemingly magical bar tricks, which are not really tricks but based in simple physics and science. They were shown to me by an affable Englishman named Tim Shaw, who hosts a show called “None of the Above,” debuting tonight (March 24) on the National Geographic Channel at 9 p.m. ET. In the show, Shaw will conduct a series of outrageous feats like landing a helicopter on eggs–without breaking a single one–to illustrate “how cool science can be,” he said. (In this example, the science-based explanation is that the shape of the eggs is surprisingly strong, and when many eggs are put together, their collective strength is greater than you might imagine.) Here are some tricks that Shaw demonstrated for PopSci last week.

The answer: it will suck up nearly all of the wine.

How does it work? The microwave turns much of the water and alcohol in the wine into steam and vapor, causing the pressure in the bottle to rise. Although the bottle isn’t sealed, the opening is small enough so that most of it remains within the container. Once he takes it out and places it upside-down in the wine, however, a seal is formed and the bottle and gases within quickly cool. As the water condenses, going from a gas to a liquid, the pressure in the bottle drops. That causes surrounding atmospheric pressure to push the wine from the bowl up into the bottle, Shaw explains.

TV presenter Tim Shaw demonstrating a trick wherein a wine bottle is made to suck up wine.

2. Create A Plasma Ball In Your Microwave

Shaw lights a match inside a microwave oven, and his assistant places a wine glass over it. He turns on the microwave. Almost immediately, a ball of plasma appears. Shaw says that this can reach a high temperature, enough to crack the wine glass. After several failed attempts he gets it to work, as you can see in the video, but it doesn’t break the wine glass. Probably for the best. (Note: I wouldn’t recommend trying this at home.)

How it works: the microwaves (produced by the appliance’s magnetron) cause the gases released by the burning match to become weakly ionized, or charged, creating plasma. Some electrons in the gases absorb the microwaves, achieving a higher energy level. But they don’t stay there for long, and as they come back down to a lower energy level, they release light and heat.

Shaw puts some whiskey in a 20-ounce plastic bottle, and then pumps it up a few times with a bicycle pump. The connection between the pump and the bottle must be air-tight, which Shaw achieves with a rubber stopper. Once he releases the seal, a haze of whiskey and water appears inside the bottle. This whiskey fog can then be inhaled. (It may be okay to do this once or twice, but inhaling alcohol in general is dangerous.)

How it works: the gradual build-up of pressure causes a small amount of the alcohol to vaporize and become a gas; the pressure overcomes the intermolecular forces that typically make alcohol a liquid at room temperature, and allows it to make the phase transition to a gas. When the pressure drops again, the alcohol condenses to form small visible droplets.

4. Transfer Water Into A Glass

You’ve got a bowl shallowly filled with water, an empty glass, a lime wedge, and a book of matches. Now get the water from the bowl into the glass (without pouring it in–that’s cheating).

The solution? Place the lime wedge in the middle of the bowl. Light a match and stick it upright (flame up) in the lime wedge. Place the glass over it. Watch the water get sucked into the glass as the match is gradually extinguished.

How it works: As the match burns, it consumes the oxygen in the glass. While this creates some water and carbon dioxide, it reduces the pressure, sucking in the water.

5. Break the Bottom Out of a Bottle

Shaw fills a beer bottle almost all the way to the top with water, leaving about a one-inch gap. He then firmly hits the top of it with the butt of his palm. The bottom pops off, and the water goes with it.

I had previously thought this was an urban legend, but apparently it is not. One key to doing this is holding the bottle firmly in the non-striking hand, preventing it from moving downward as much as possible. This creates a shock wave of pressure that moves through the liquid, breaking the bottle its weakest point, the bottom.

One important note: this doesn’t work with carbonated beverages like beer, Shaw said. Instead, water or flat beer are ideal. Bubbles in the liquid interfere with the movement of the shock wave, he said.

In related news, here’s why hitting the top of somebody’s beer bottle causes it to foam over.