Deep-frying a turkey can be a delicious Thanksgiving treat—or a deadly conflagration, as our rather dramatic video shows 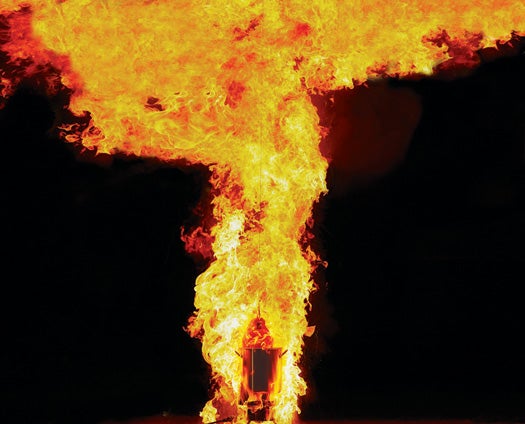 Oil and water don’t mix: it’s an old saying, but it’s never more true than when you’re talking about a pot of hot cooking oil and the moisture condensed on the surface of a frozen turkey. it’s pretty incredible the amount of fire that simple combination can create.

Cooking oil is flammable, but it doesn’t catch fire in a deep fryer because it never approaches the approximately 800°F required. Even if you drop a match in the fryer, the heat is conducted away from the flame and dissipates into the oil, and the fire goes out.

Thanksgiving dinner goes from frozen to scorched in two seconds

The recommended oil temperature for a deep fryer is 350°, well above the boiling point of water. When you drop food in, you immediately see bubbles; that is the water in the food boiling off. Put too much moisture in by lowering in a frozen turkey, and the vaporization of the water throws oil droplets into the air. a few of the droplets hit the burner under the pot and catch on fire, beginning a chain reaction that ignites a large cloud of droplets. The result is the smell of a county fair—and a towering inferno that can ignite everything around it.

So even if it’s tempting to buy one of the many cheap turkey deep-fryers this time of year, you can add death by incineration to the other main reason not to: death by clogged arteries. (Note: grilled chicken can also sometimes catch fire.)

WARNING! This demonstration will burn your house down–seriously. If you want to fry a turkey, read the fryer’s instructions, and do not try to re-create this effect at home under any circumstances.

Let’s see that one more time in slow motion.