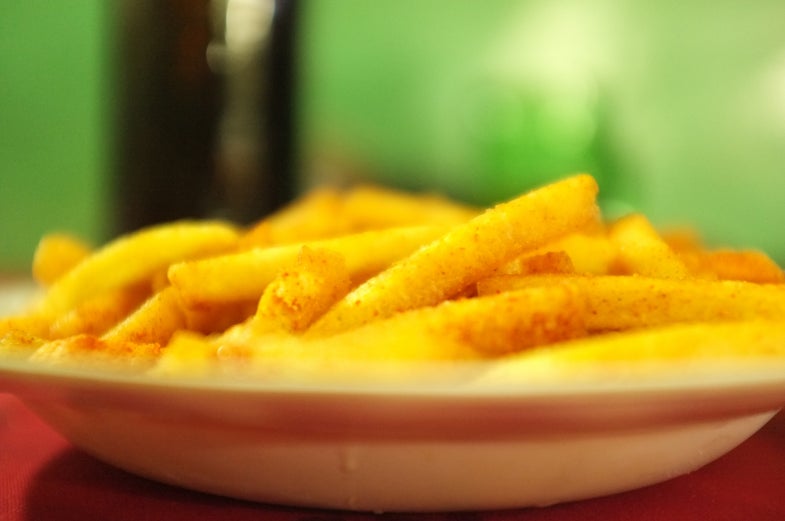 A recent study at the University of Granada in Spain has found that frying vegetables in extra virgin olive oil changes them for the better, adding phenolic compounds, which have antioxidant properties. Boiling and other methods of cooking veggies have no such benefit.

Phenolic compounds are substances produced by plants, and as such are present in many of the foods we eat. In plants, they can serve as a sort of protection against insects or other pests, and they also add color or flavor to the plants. And when we humans eat plants, we reap the benefits of the phenos’ antioxidant properties, which have been associated with reducing the risks of certain diseases.

To determine the superiority of frying, the researchers cooked potato, tomato, eggplant, and pumpkin using four different methods: deep frying, sautéing, boiling in water, and boiling in a water-and-oil mixture. Then, the cooked vegetables were analyzed for fat content, moisture, and total phenols. Deep frying and sautéing in extra virgin olive oil, as you might expect, increased the fat content, but the total phenolic compound levels also increased, while the boiled vegetables either had very similar or lower phenolic compound levels when compared to the raw veggies.

The higher level of antioxidants comes from the extra virgin olive oil, which has its own phenolic compounds that are transferred to the vegetables during the cooking process. Don’t replace all the water in your soup with oil yet, though. “Boiling is recommended if the vegetables are to be consumed together with the cooking medium (i.e. the water),” Cristina Samaniego Sánchez, one of the study authors, says in a press release.