9 Crazy Body Hacks That Give You Superhuman Powers

But don't try these at home. Seriously. 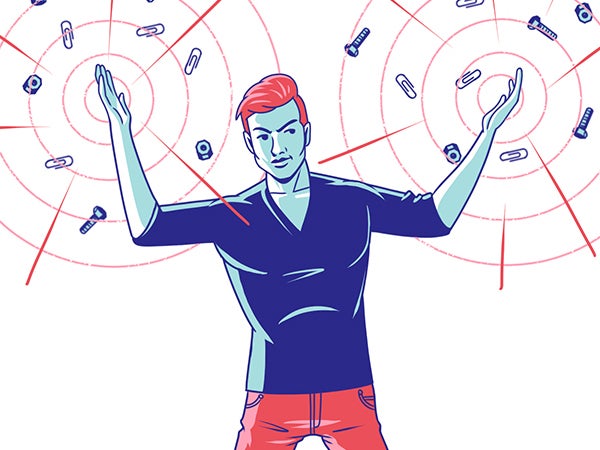 Gamers often perform repetitive tasks to improve their character’s skill set, gain rewards, and advance to new levels. The process is known as grinding: Now, an underground movement has taken up that expression, calling themselves grinders, and they’re trying to gain some of those same superskills—only in real life by hacking their bodies.

To cynics, the upgraded-self movement—aka body hacking—can seem a reckless and narcissistic pursuit. After all, treating your body like a home science kit can have serious consequences (scarring, bleeding, pain on the scale of passing out). Yet tinkering with human hardware is a centuries-old pursuit. Bolting titanium plates onto problem spines has become downright common. Today’s transhumanists take it further. They seek to extend the senses and co-mingle them, allowing themselves to do things like detect Wi-Fi, hear colors, sense magnetic north, and see in the dark. Technology is driving the trend. But so are a few renegade surgeons—operating in an ethical gray area—and a growing number of innovative grinders, all of them hoping to one day push the cyborg off the Comic-Con floor and out onto Main Street.

In 1998, U.K. professor Kevin Warwick became the first person to have a transponder chip implanted under his skin, but only after receiving ethical approval to experiment on himself and enlisting a doctor to assist him. It wasn’t until Seattle-based IT consultant Amal Graafstra had a chip implanted in each hand, in 2005, without seeking approval, that the grinder world found a spark. Graafstra uses the chips to open his home and car doors and to log on to his computer. He also sells them to grinders on his website Dangerous Things. Last year, Graafstra became the first to implant a tiny photovoltaic panel in his forearm to learn how much light traveled through the skin and whether it could power internal sensors such as a heart monitor. Though it generated a mere 50 microamps at 3 volts—about a 400th of the current needed to run an LED—he felt elated, saying, “it proves the value of citizen science.”

This article was originally published in the September 2015 issue of Popular Science, under the title “Go Hack Yourself. Not Really.” 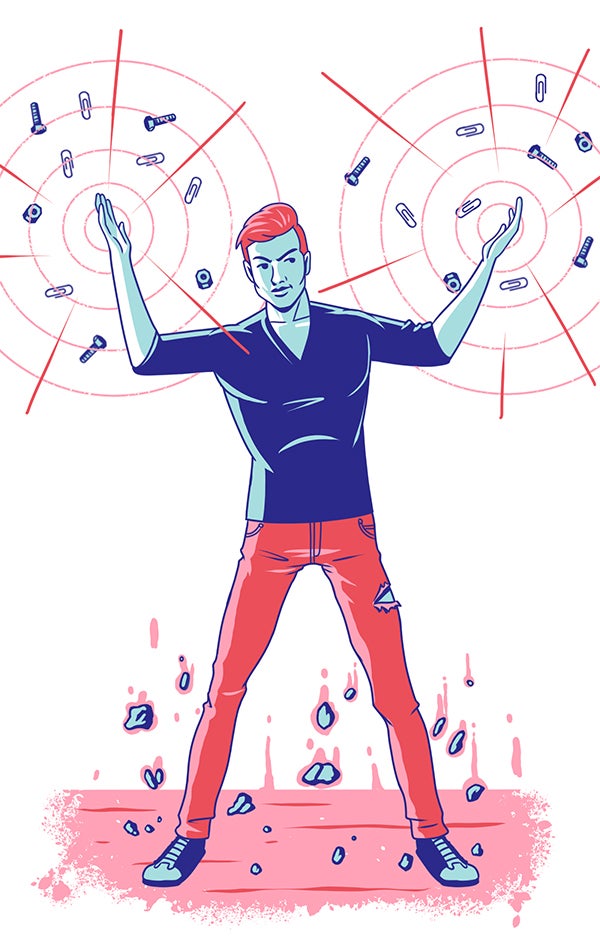 Magnets are easy to install and among the first hacks grinders try. Piercing-shop staffers typically embed a barrel-shaped neodymium variety, the size of a grain of rice, beneath the skin of a finger. The magnets are coated in bio-proof materials such as titanium nitride (used to coat replacement hips), silicone, and Teflon. When one encounters an electromagnetic field, it vibrates against the nerves, enabling the user to feel things, like power transformers and microwave ovens. They’re also good bar tricks: Dangle paper clips from your finger! But use with caution. One grinder injured the tissue near his implant—by opening a pickle jar. 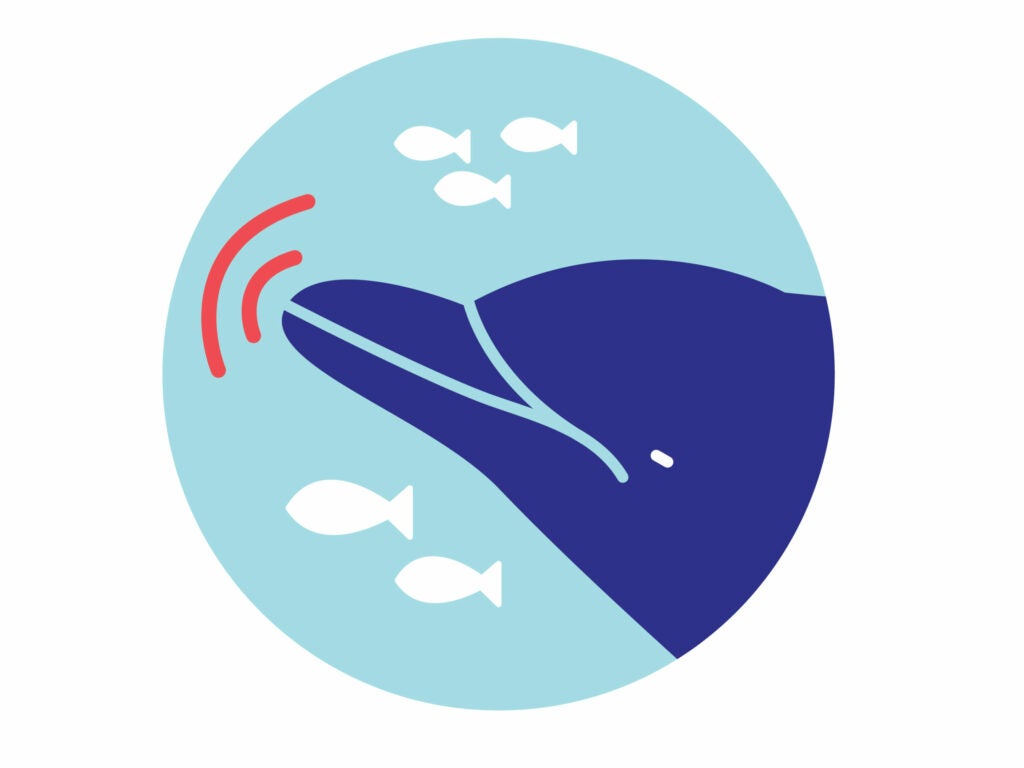 Want to sense distance like a dolphin? Bottlenose—from the hacker collective Grindhouse Wetware—creates sonar perception in an off-the-shelf kit ($60). Its dolphin-like range finder locates an object in a dark room using an ultrasonic distance sensor. It then sends electromagnetic pulses to a magnet in the user’s finger, providing a sense of things like an object’s size and distance. As a user moves closer to the object, the sensations grow stronger. Bottlenose can also detect radiation or the presence of ethanol, and it can pick up Bluetooth signals. A thermal infrared sensor spots warm objects—such as a stove or a clothes dryer—from up to several feet away. There are also add-on sensors for detecting things like ultraviolet light and for sensing compass headings. For people without magnet implants, a wearable magnet works just as well, delivering the same sensory vibrations outside the skin, as long as the magnet is worn within the range of the Bottlenose device. 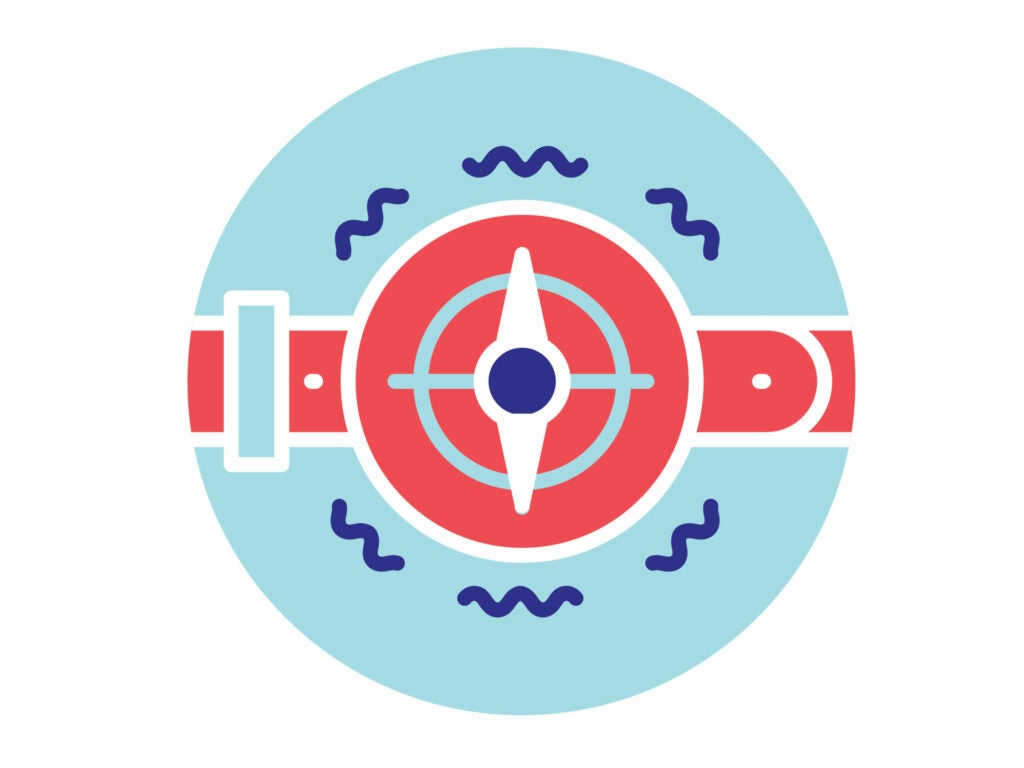 We humans get lost, and finding our way usually means asking directions. For a 2014 report in the journal Consciousness and Cognition, researchers at the University of Osnabrück in Germany wanted to know if they could instead create a learned sense of direction. For seven weeks, nine male and four female subjects wore belts with 30 vibrating motors stitched onto an elastic fabric that indicated when they were facing magnetic north. The subjects biked and walked regularly. Over time, they improved their overall orientation abilities on a subcognitive level. “Today I stepped out of the train, and I immediately knew where I [had] to go,” subject BWP9 said. “With the belt, one does not have to always care so much whether there is a turn … one simply feels it!” Once the belts were removed, however, some users felt disoriented and insecure. Similar devices are available as kits, such as the North Paw from sensebridge.com ($149) or as free plans on instructables.com 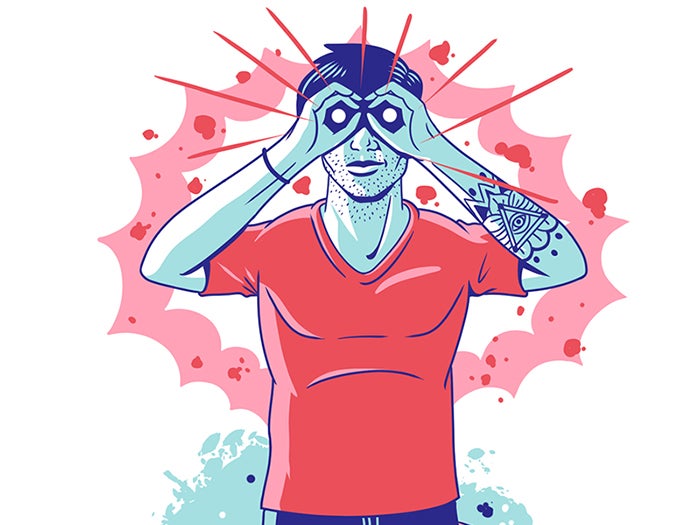 The deepsea dragonfish, found in oceans of the Southern Hemisphere, swims a mile below the water’s surface. A chlorophyll derivative in its eyes helps it see in the dark—or rather in a red light cast by a bioluminescent organ. In March 2015, California biohackers Gabriel Licina and Jeffrey Tibbetts wanted to try a similar derivative, Chlorin e6. They bought 100 milligrams from a medical supplier for $39. A heavy dose would have burned the eyes, so they diluted half in insulin and saline, adding the organic solvent dimethyl sulfoxide. Tibbetts pinned Licina’s eyelids with specula and dosed the eyes. After two hours, Licina was able to identify people 50 feet away in a darkened area 100 percent of the time, while four control subjects had a 33 percent success rate. So far, there have been no bad side effects. 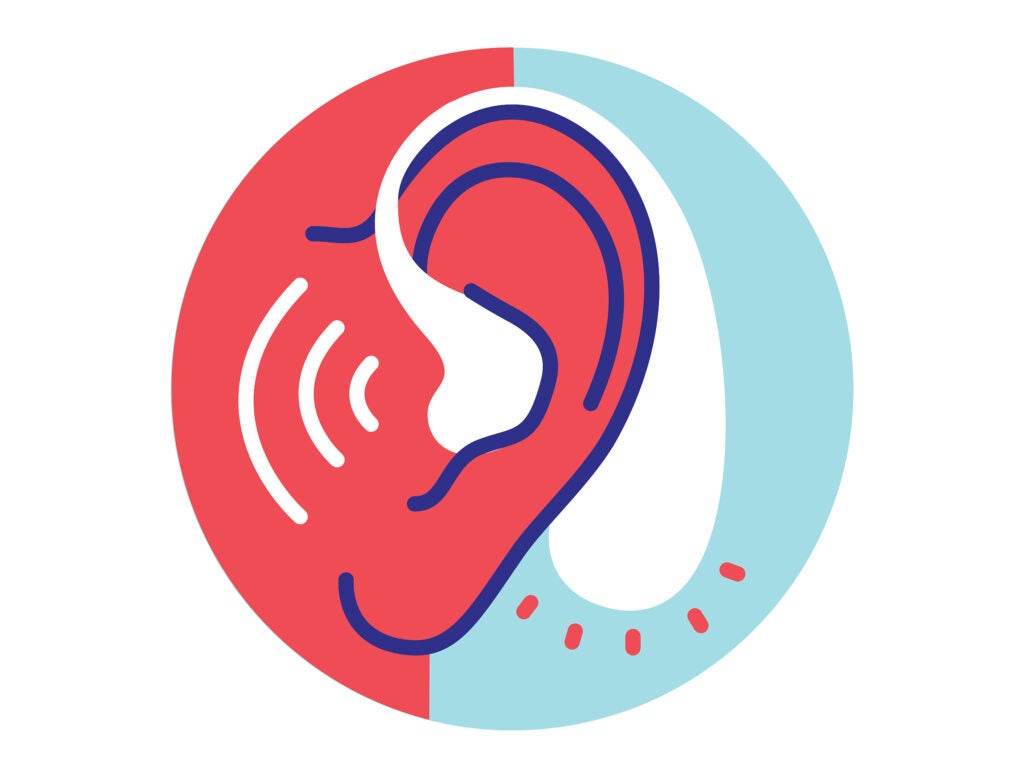 Imagine walking down the street, and instead of looking for that little Wi-Fi sticker on the doors of coffee shops, you could hear a hotspot’s presence. London journalist Frank Swain is partially deaf. He wears Starkey Halo hearing aids that link via Bluetooth to his smartphone. Last year, a sound-engineer friend hacked his phone’s software, so now it sends melodies and Geiger-counter-like clicks to his hearing aids when it detects Wi-Fi zones. “I pick up a lot more data than you might think,” Swain says. “Routers give away a lot through the pitch of their digital signals, including the brand, the type of router, the Inter­net Service Provider, whether high security or low security. I can even home in on their location using stereo.” 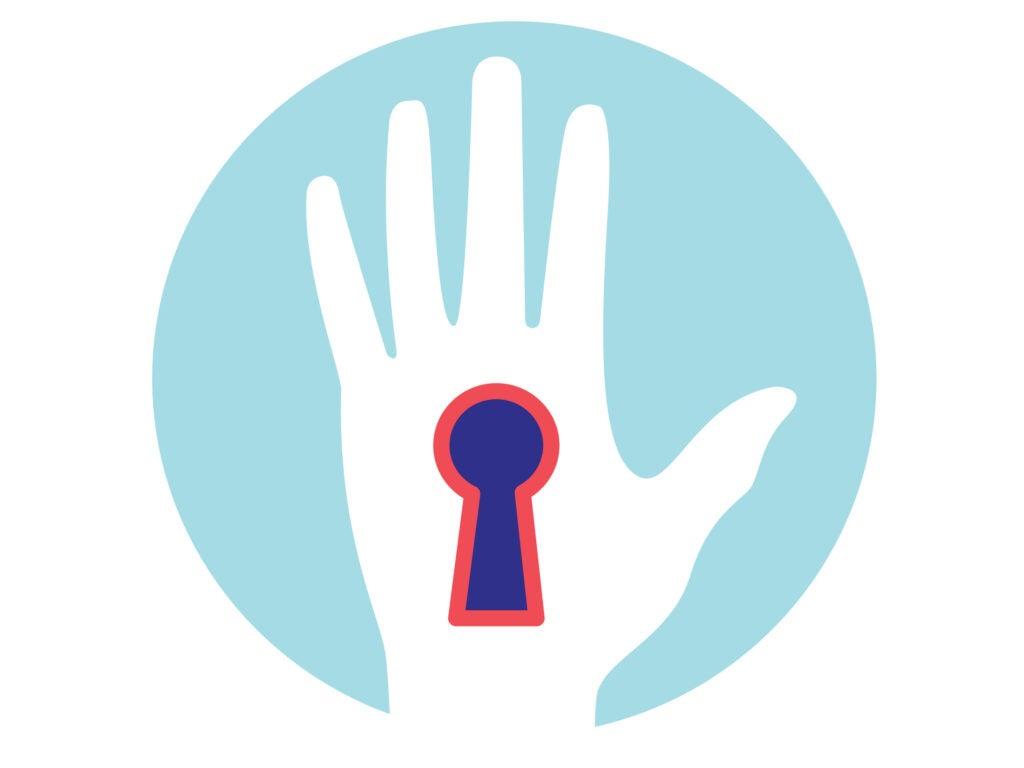 Computer-readable ID chips are now so small—a mere 3 mm to 6 mm long—that they can be inserted beneath the skin with the aid of a large needle. This is another simple gateway hack for grinders. Like magnets, the chips are typically implanted at piercing shops, without anesthesia, which generally requires a permit to administer. Using Radio Frequency Identification (RFID) and Near Field Communication (NFC), you can make chips operate dozens of consumer devices, such as RFID door locks. You can store data on them and transfer things like video-access codes to a friend’s NFC-enabled Android smartphone—all with the simple wave of your hand. 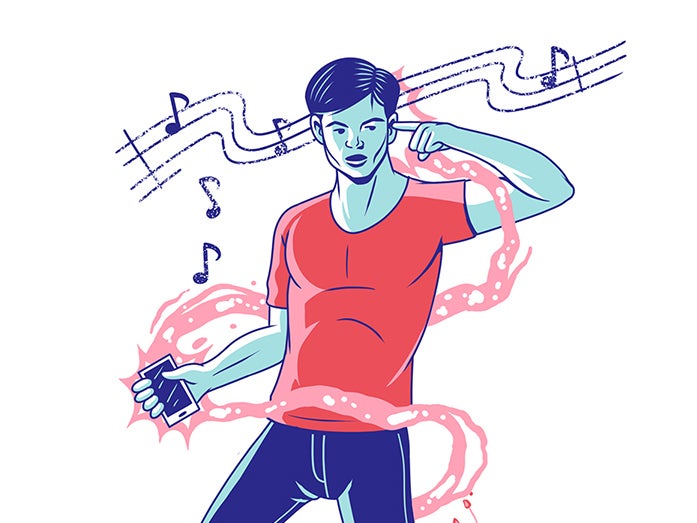 Rich Lee, a salesman and grinder from St. George, Utah, wanted true wireless headphones. So he implanted a magnet in the small prominence (known as the tragus) in front of each ear. He then hacked his smartphone to send audio into a signal amplifier that relays it to a wired “antenna” necklace around his neck. The necklace creates an electromagnetic field around Lee’s head. And the field induces vibrations in the ear magnets that Lee hears as music. “The sound quality is decent, maybe comparable to a cheap set of ear buds,” Lee says. In one experiment, he connected the necklace to a small microphone attached to his heel, which senses subtle tremors in the ground. “I could detect a jogger coming up behind me on a paved road long before I could even see him,” he says. 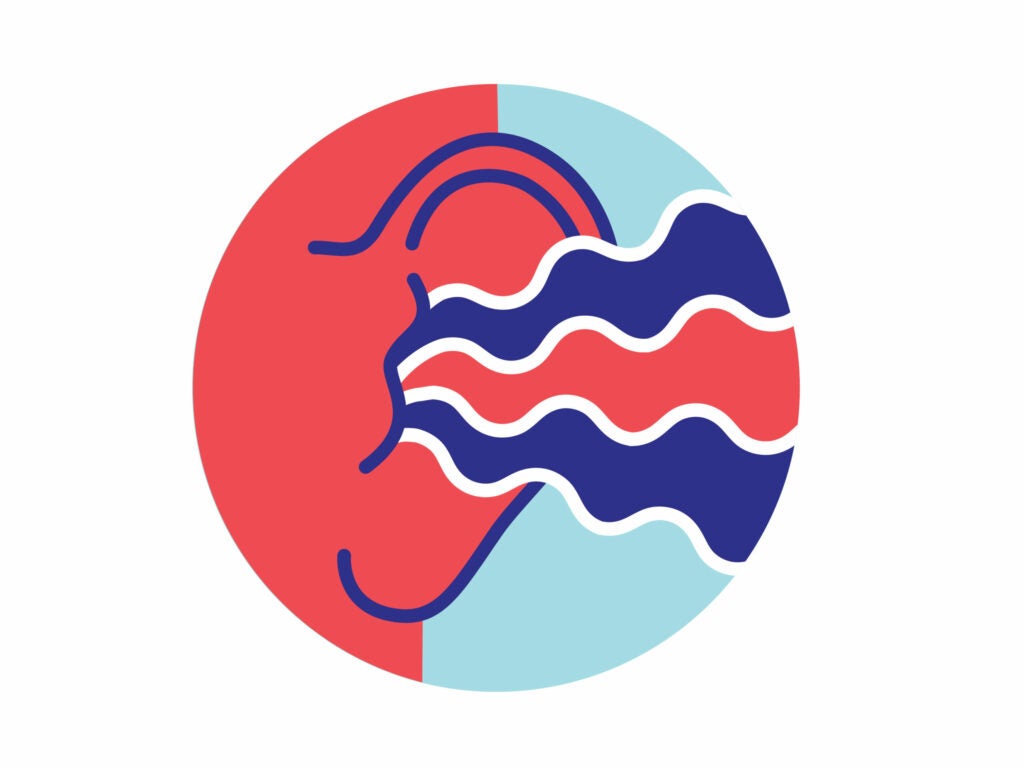 Colorblind artist and musician Neil Harbisson saw the world in gray­scale for the first 21 years of his life. Then, on December 2, 2013, in a Barcelona clinic, a surgeon (operating without ethical approval) drilled four holes into the occipital bone at the base of his skull and anchored a camera. Its flexible lens arcs over Harbisson’s head to just above his brow, where it captures the color of any object Harbisson is looking at; a chip inside his skull transposes the color into a frequency (red becomes the musical note F; rose becomes E); and then turns each frequency into a vibration picked up by Harbisson’s inner ear. A yellow sock sounds like the G note above middle C; the blue eyes of Nicole Kidman (who he once met) sound like B. Volume relies on color saturation. Fused to his body, the camera stalk feels like a long tooth, Harbisson says. Every few months, he has to charge a small battery to power the processor, camera, actuator, and wireless systems. There is no on/off button. 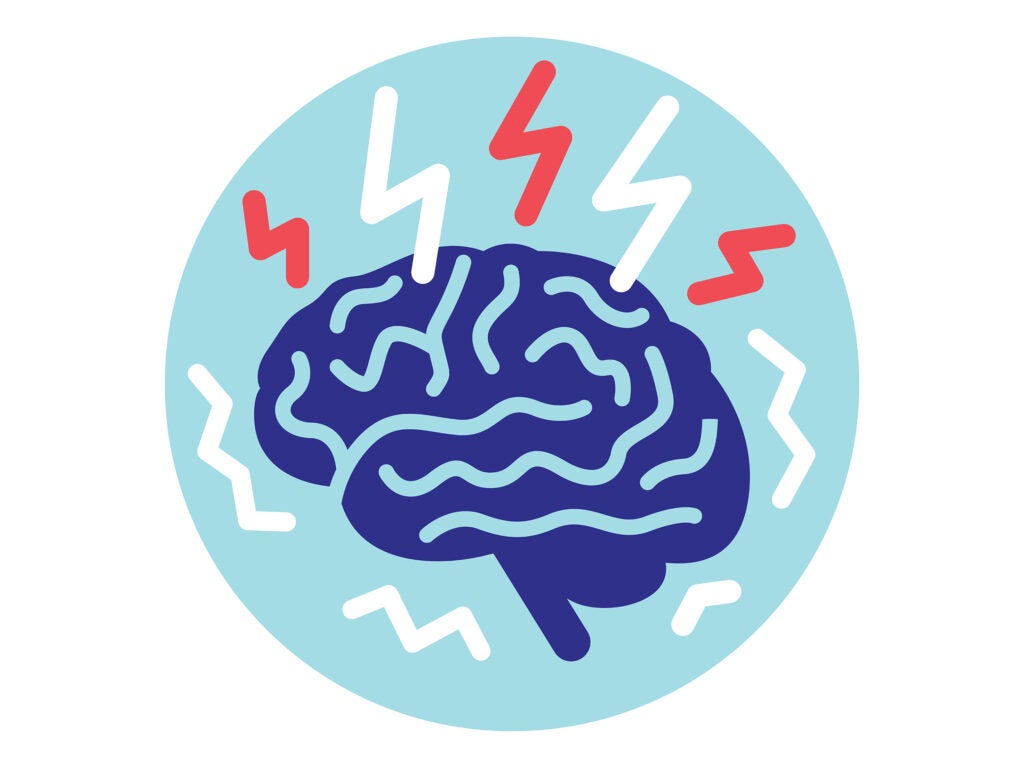 Shock Your Brain Into Working Better

Electricity shot into the brain temporarily boosts intelligence, according to academic studies and, less convincingly, to adventurous amateurs. A 2015 analysis in Restorative Neurology and Neuroscience surveyed 13 studies that showed improved brain performance through transcranial direct current stimulation (tDCS) and random noise stimulation. The experiments used a very low current of up to 2.5 milliamps (usually corresponding to a maxi­mum 18.5 volts) for no more than 20 minutes. Subjects then completed tasks in which they showed better memory, cognitive control, and math skills. Such experiments are typically done with research-grade equipment in a lab, not performed by amateurs. But with a great deal of risk, grinders have made their own tDCS devices. Some buy them ready-made online for as little as $150. Either way, of all the questionable biohacks, definitely do not try this one at home.
Life Skills
Features