An Android-powered pot stirrer and an Xbox controller snack extruder 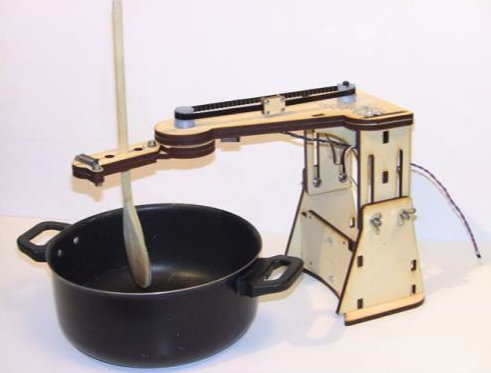 Isn’t it a pain when you forget to stir your soup and it scorches? Or when you’re trying to play Madden whilst hungry, but you need both hands on the controller? Ben Heckendorn, game device modder extraordinaire, came up with some solutions. Watch the videos past the jump.

Heckendorn is best known for modifying game consoles and building random assistive devices like hands-free luggage, but occasionally he dabbles in kitchen-related DIY products. They’re mostly inspired by geek laziness — the lack of desire, or ability, to get up off the couch and eat something. This winter, a viewer of the Ben Heck Show, Heckendorn’s videocast, suggested he build some type of game console food tray to improve the experience of sitting on the couch and watching football. Or playing video games about football. So he settled on a device that could securely hold, and conveniently push out, a freshly microwaved Hot Pocket.

An Xbox controller’s charging port could be used as a food docking system and power supply for the Hot Pocket extruder, and Heckendorn turned to a caulk gun’s ratcheting ability for inspiration. A game controller won’t hold an average caulk gun, so instead he used a laser cutter to form a plastic ratchet and gear system so a half-eaten Hot Pocket wouldn’t slide back down. Don’t have a laser cutter? Heckendorn suggests another extruding device: A deodorant canister.

“My inspiration comes from what hasn’t been built, rather than what has been built — ‘It would be cool if this existed,'” he says. “It’s no more ridiculous than the average thing you might see in SkyMall.”

Last month, Heckendorn built a pot-stirring device controlled by an Android tablet to automate the laborious process of stirring Hamburger Helper. “You don’t want to sit there stirring it, you want to read the Internet,” he explains.

Android-powered devices have Bluetooth, touchscreens and simple coding capabilities, so they’re perfect for automating a simple, repetitive task like stirring a pot. Heckendorn had servo motors and gears laying around and built a simple robotic arm to fit over an average saucepan.

For an upcoming camping-themed show, Heckendorn is working on a solar-powered automated drink cooler, which employs heat sinks and other systems to rapidly chill a soda or a beer. He also wants to build an energy-saving refrigerator browser, using a webcam inside a fridge that you could check from your computer or mobile device. No more opening and closing the fridge to stare at your leftovers, and no more uninformed grocery store shopping trips that send you home with excess cartons of eggs.

“A lot of this stems from being single. You’re on your own, so you need robotics,” he says.