Cut a better slice of pizza with math

Or at least a much more complex slice. 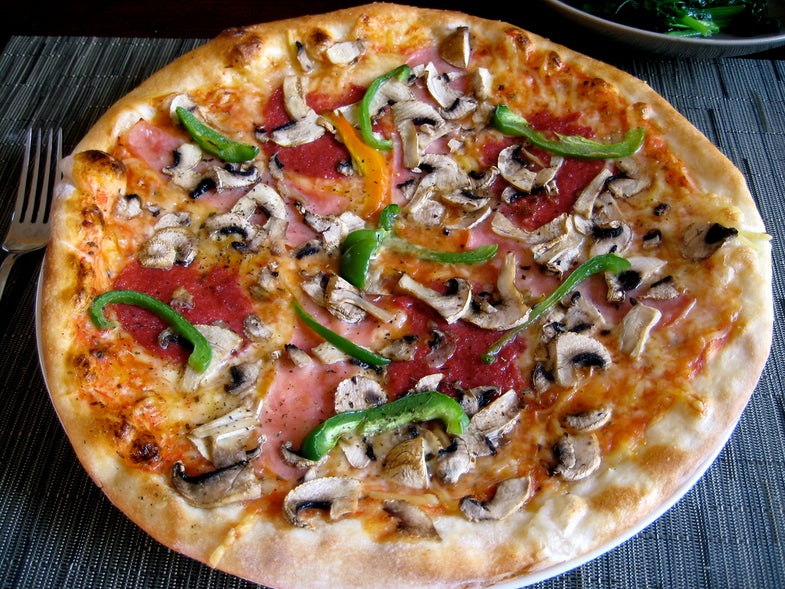 Math can teach us a lot about how to better eat pizza. In 2013, a mathematician named Eugenia Cheng determined the formula for the perfect pizza size. And then for the best way of shoveling that perfect pie into your mouth (folded, obviously), you can turn to a 19th-century mathematician. But what about that step in between making the pizza and eating it? You know, cutting it into the perfect (or at least visually interesting) slice. Well, math is here to help again.

New Scientist writes about the research done by Joel Haddley and Stephen Worsley at the University of Liverpool. The two mathematicians were investigating monohedral tilings–a pattern in which all the tiles are the same shape. “Such tilings are produced on a daily basis by pizza chefs by taking radial cuts distributed evenly around the centre of the pizza,” the researchers note in the paper. That’s the traditional method of cutting where all the slices meet at the center of the pie.

Mathematicians had previously come up with new ways to slice—without slighting anyone of course. That method created 12 slices (some with lots of crust, some with basically none; see above, left) that were all nevertheless congruent.

But those were still three-sided slices. Haddley and Worsley thought they could do better than that. They discovered a way to slice curvy pieces with nearly an infinite number of sides (as long as it’s an odd number of sides) and then further divide those slices in half.

For a slightly flashier way to divide the disk, the researchers then gave each slice more complex shapes by creating wedges in the sides, still producing monohedral tilings that fit together into a circle. It’s unclear how someone might actually perform this work of complex pizza art in real life, but one could imagine it requires lots of patience, precise tools, and of course, pizzas.

“I’ve no idea whether there are any applications at all to our work outside of pizza-cutting,” Haddley told the writer. But he has indeed tried cutting a real pizza using this method. You can check out photo of that experiment over at the New Scientist site.