Humans naturally fall into energy-efficient speeds when they run

"We have a hard time overriding that desire to use as little energy as possible in any given task." 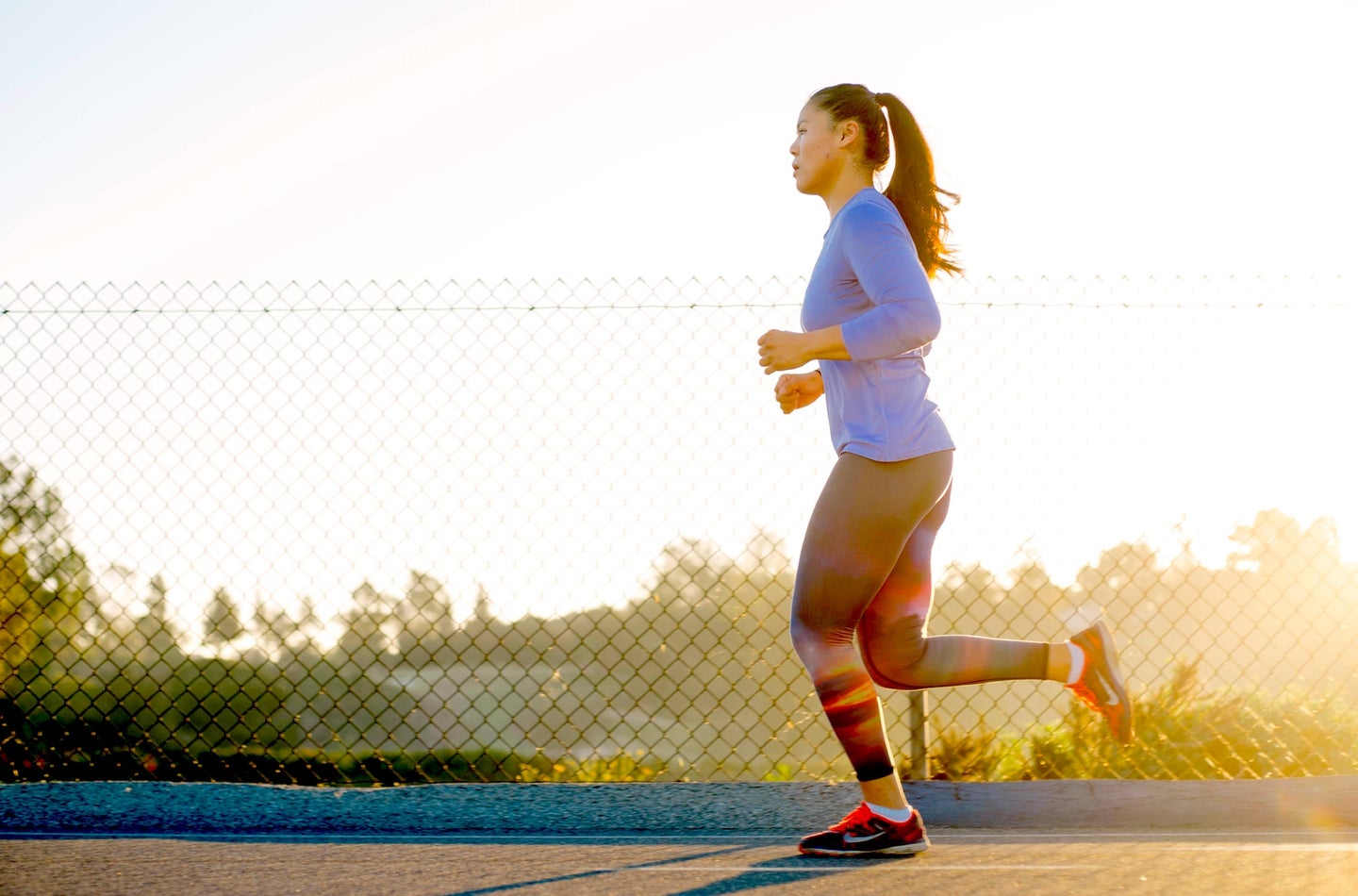 We naturally tend to run at paces that use as little energy as possible. Andrew Tanglao/Unsplash
SHARE

When out for a jog, people automatically settle into energy-efficient running speeds regardless of how far they’re going, scientists reported this week.

A group of biomechanists analyzed measurements from people running on treadmills as well as wearable data from thousands of recreational runners, and concluded that humans have a preferred speed that minimizes calories burned.

“A lot of people’s assumption, including our’s going into it, would be that you choose a faster pace when you’re going to run a shorter distance and then slow that pace when you’re going to travel a longer distance,” says Jessica Selinger, a biomechanist at Queen’s University in Kingston, Ontario and coauthor of the findings. “What we found is that an individual’s running speed is really consistent regardless of the distance that they’re running.”

The findings have relevance for athletes, anthropologists, and rehabilitation specialists, she and her collaborators reported on April 28 in Current Biology.

“This research suggests that the drive to minimize energy costs is really strong in humans, even when we’re purposefully exercising as a way to expend more energy,” says ​​David Raichlen, an evolutionary biologist who studies exercise at the University of Southern California and who wasn’t involved in the study. “We have a hard time overriding that desire to use as little energy as possible in any given task.”

Previous studies have shown that in competitive races, where the goal is to cross the finish line as quickly as possible, humans adopt brisk paces for shorter distances and more moderate paces for longer ones. But it wasn’t clear if this pattern also applied to joggers under more relaxed conditions.

To find out, Selinger and her colleagues analyzed data from 4,645 real-world joggers who collectively took 37,201 runs that ranged from 1.6 to 11.3 kilometers (1 to 7 miles) while wearing fitness trackers. They found that the real-world joggers generally kept to the same speed regardless of how far they ran. Only over distances greater than 10 kilometers (6.2 miles) did the runners slow slightly, likely due to fatigue kicking in.

The researchers also tracked how much energy 26 college students burned while running at different speeds on a treadmill. The team then compared these participants with recreational joggers from their database of similar age, sex, and body mass index (BMI) whose runs covered relatively flat terrain. It turned out that the speeds that were most energy-efficient for the treadmill runners matched the preferred speeds of the real-world joggers.

“For a lot of folks it’s the [pace] that’s going to feel quite comfortable and that we have this natural tendency to slip back into,” Selinger says. “It’s certainly the case that you can and do run faster in other settings; if you’re in a race, you’re going to push yourself beyond that energy-optimal gait.”

This optimal speed varies depending on characteristics such as weight or sex; the most energy-efficient speed was on average 2.65 meters per second (8.7 feet per second) for females and 3.35 meters per second (11 feet per second) for males. (The researchers inferred the sex of study participants in the wearables group from self-reported user identification in the device’s app). However, these estimates probably aren’t broadly representative, Selinger cautions. The energetic data she and her colleagues gathered came from healthy young adults who were athletic but not elite runners. Measuring participants from a wider range of ages, fitness levels, and other demographics could help the team build a more complete picture.

The researchers additionally plan to investigate how training and environmental conditions such as the weather affect a person’s energy-optimal running speed. Future studies could also track participants during routine jogs as well as on the treadmill, Raichlen adds. “It would be nice to see more direct matching of individuals with their energy costs,” he says.

Whether walking, galloping, flying, or swimming, animals generally stick to the most efficient speed for their bodies, says Jennifer Hicks, a biomechanist at Stanford University and another coauthor of the report. The new findings indicate that humans share this trait. “From an evolutionary perspective, moving in the way that’s most energy efficient makes a lot of sense in that we can travel farther with less fuel,” she says.

The results may also have practical applications for exercise scientists, rehabilitation specialists, coaches, and sports medicine practitioners. “Understanding what drives people to move the way that they do is a really important first principle before we start thinking about training people to move in other ways, or adding assistive devices to their body that are going to change how they move,” Selinger says.

It’s possible that designs for fitness trackers or running shoes could be improved by taking into account people’s most efficient running speeds. “Can we design a shoe that will shift someone’s energy from that pace to a slightly different speed so that becomes their new natural speed?” Hicks says.

[Related: Why do marathon runners get the runs?]

For recreational runners looking to spend more energy, she says, listening to music or running with other people are great ways to change up your running speed. “If burning calories is the goal of your run, running a little faster than your natural tendency or even a little slower is the pace that may make sense,” Hicks says.

Selinger adds that even though you burn fewer calories when you are running slower, it’s going to take you much more time to get to your destination—so overall, you end up burning more calories. That is, you’re going to burn more calories running a mile very slowly than you are running that mile at your most efficient speed. In this way, Selinger says, our bodies are similar to a car that must cover a set distance. “You would burn more fuel if you just idled and barely moved and it took you hours to get from point A to point B, and you would also burn more fuel if you put the pedal to the metal and went as fast as you can,” she says. “There’s an optimal speed you can travel your car at to burn the least amount of fuel, and the same is true for the runner.”

But all that said, running and other forms of exercise offer many advantages aside from burning calories, such as strengthening muscles and lowering the risk of cardiovascular disease.

“I wouldn’t want folks to get too hung up on the calorie-burning aspect of it,” Hicks says. “Running at your preferred, energy-optimal speed is also a great choice to get the benefits to mental health and protection against disease that physical activity has.”