An ingredient in acne medication could counteract the mosquito-charming effect. 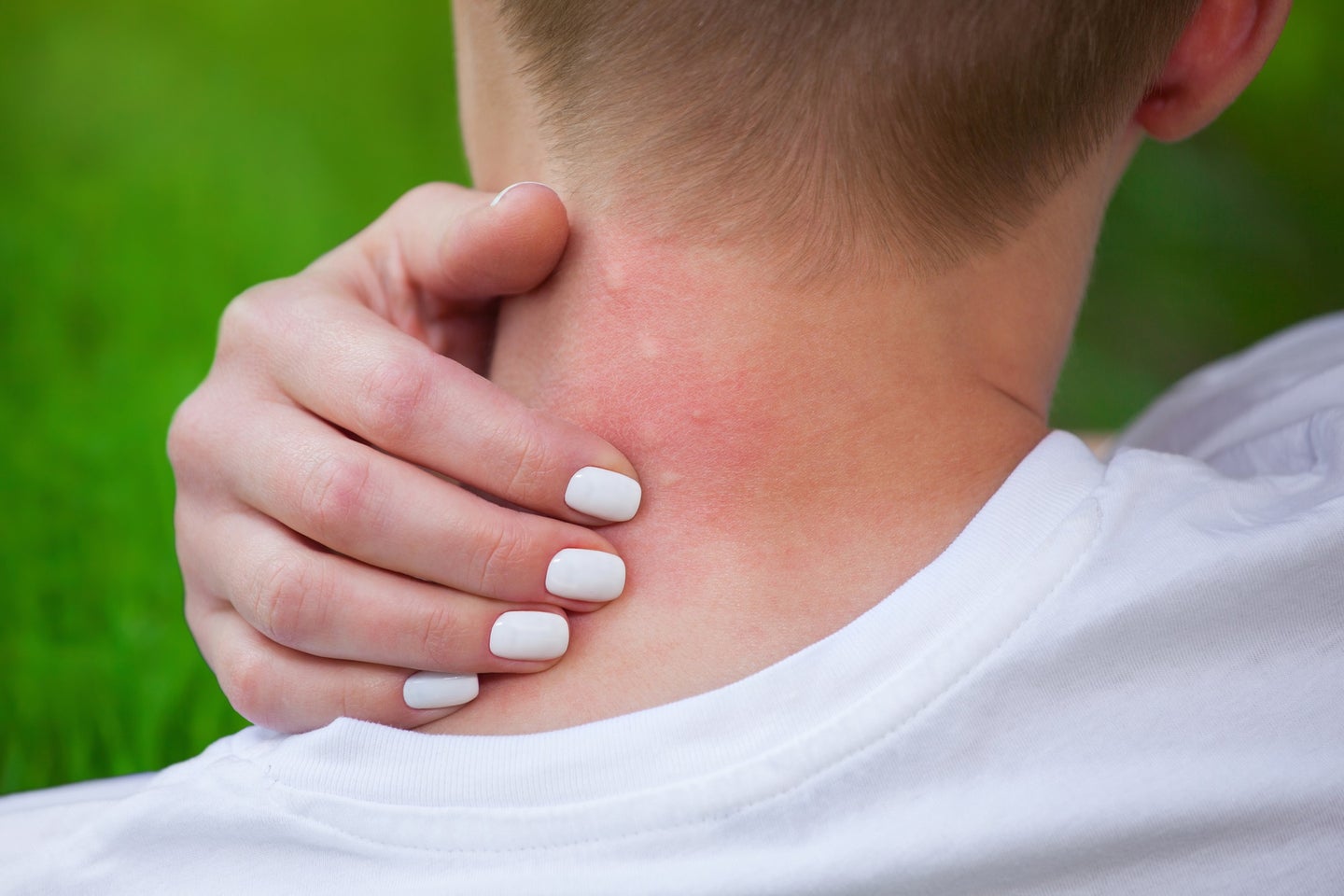 Have you ever heard anyone say their blood is "sweeter" to mosquitoes? Well, it could be true, depending on what viruses they've gotten in the past. Deposit Photos
SHARE

Disease experts used a series of experiments to determine that “skeeters” prefer to dine on a small group of mice infected with dengue and Zika. These infections caused the bacterial communities on the animals’ skin to boost production of a molecule called acetophenone, which in turn piqued the interest of mosquitoes. However, giving the rodents a chemical derived from vitamin A–that also happens to be a medication for severe acne–countered the effect after several days.

Treating dengue and Zika patients with the compound could ward off mosquitoes and cut down on transmission of both diseases, the team reported today in the journal Cell.

The team was “very excited to find this interesting phenomenon, and offer a novel strategy to interrupt [the virus] lifecycle, thus controlling [them from] naturally spreading,” Gong Cheng, a microbiologist at Tsinghua University in China and coauthor of the findings, wrote in an email. “Our study may provide some novel [concepts] to inform real-world public health strategies.”

Previous studies have reported that mosquitoes are drawn to the scent of people infected with the malaria parasite. Infectious disease scientists have strongly suspected that this is also the case for certain viruses spread by insects and other arthropods. But this is the first time that researchers have actually identified a molecule that can prompt the attraction, Rollie Clem, a virologist at Kansas State University who wasn’t involved in the research, said in an email.

“This is very elegant and important science. Virologists are realizing more and more that we need to take into account not only the direct interactions between viruses and their hosts, but also with the other microorganisms that are present in or on the host,” he explained. “All of the living things that we as humans generally think about, whether they are animals or plants, are not single entities, but are communities of organisms.”

To understand how the viruses might use odor to aid their own transmission, Cheng and his team first demonstrated that when given the choice between infected and healthy mice, more mosquitoes tried to feed on the sick rodents. The researchers then filtered out chemicals known as volatiles from the air around the rodents to mute the scent of their infections. Without that cue, mosquitoes downwind of the mice went after healthy animals just as often as sick ones.

The researchers next analyzed the chemical composition of the volatiles, and identified 20 compounds that increased or decreased in both dengue- and Zika-infected mice. The team used a technique called electroantennography, which measures electrical signals being sent from an insect’s antennae to the brain, to assess the mosquitoes’ interest in the different chemicals. They saw that acetophenone, a common byproduct from skin bacteria that’s also used as a fragrance and flavoring agent, prompted the strongest physiological response in the blood suckers.

To test this further, Cheng and his colleagues set up side experiments involving the compound. They found that mosquitoes were more drawn to chambers filled with acetophenone than empty ones. The insects were also significantly more interested in mice with acetophenone sprinkled on their skin, and to humans with acetophenone rubbed on their hands, than those without. Additionally, mosquitoes were eager to feed on human volunteers with filter paper laced with volatiles attached to their palms. (The non-infectious samples were swabbed from the armpits of dengue patients.)

Finally, to confirm the origins of the tip-off scent, the team used an alcohol spray to remove the skin microbiota from infected and uninfected mice. That caused the rodents to hardly produce any acetophenone.

While several types of bacteria were more plentiful on the skin of infected mice than healthy ones, four species of Bacillus bacteria notably registered as “potent producers” of acetophenone, the researchers wrote. When they spread those four species on healthy mice, the rodents drew more mosquitoes compared to others treated with the non-acetophenone-producing bacteria.

One way animals typically keep their skin bacterial populations in check and ward off disease-causing microbes is by secreting antimicrobial proteins. Cheng and his colleagues found evidence that dengue and Zika viruses block production of such proteins. Sick mice had reduced amounts of an antimicrobial protein called RELMα on their fur, as well as reductions in genetic material related to the protein.

All of this indicates that by suppressing RELMα, the viruses encourage Bacillus bacteria to multiply and pump out more acetophenone, ultimately making the host more appealing to hungry mosquitoes.

Fortunately, Cheng and his team had a potential remedy in mind. Earlier research has indicated that rodents produce more RELMα and are more resistant to skin infections after eating compounds derived from vitamin A. The group fed infected mice a vitamin A derivative known as isotretinoin, which can be found in acne medication. After treatment, the rodents had significantly more RELMα protein and less Bacillus bacteria on their skin. That change did not make them mosquito-proof, however: They attracted a similar number of insects as the healthy mice, but fewer than the untreated infected ones.

The study’s major limitation is that the majority of the results come from experiments in mice, which have different skin physiology than humans, Cheng wrote in his email. It’s possible that dengue and Zika could take advantage of different, unidentified bacteria when they infect humans, so further studies about how the viruses affect the skin microbial community and acetophenone production in humans are needed.

This summer, Cheng’s team will investigate whether administering vitamin A derivatives to dengue patients will shield them from mosquito bites. They also plan to explore whether gene editing can be used to create mosquito populations that cannot smell acetophenone, and therefore, wouldn’t make a beeline for virus-infected people.

Another question for future research is whether other kinds of insect-borne viruses use similar tricks to turn their hosts into mosquito magnets, Clem said in his email.

“People shouldn’t conclude, based on this study, that taking vitamin A will make them less attractive to mosquitoes,” he added. “It will only make the infected people look like normal, uninfected people to a mosquito.” In other words, the compound would keep sick people from being bitten more, but it wouldn’t work as a prophylactic for healthy people.

Still, Clem said, the findings raise hope for limiting dengue and Zika transmission in parts of the world where these viruses are common. With close to half of the world’s population is at risk of being infected, even a tiny breakthrough could have important outcomes.