Finding a “cure” for the virus is only part of beating it. 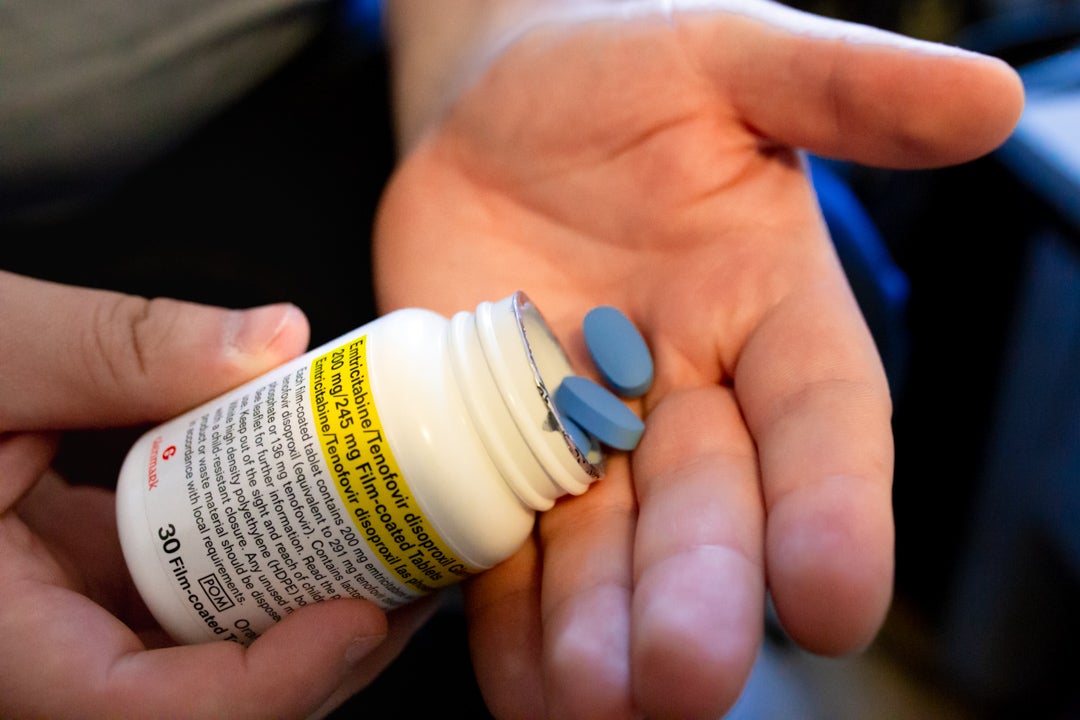 Beyond allowing people with HIV to live completely normal lives, antiretroviral drugs also prevent them from transmitting the virus to others once they reach an undetectable viral load.
SHARE

It’s been almost 40 years since the start of the AIDS epidemic, when hundreds of people began contracting deadly infections that doctors had no idea how to combat. It took until 1983 for researchers to identify the virus that was causing their symptoms: human immunodeficiency virus, or HIV. After years of medical testing, protests, and millions of deaths the world still hasn’t emerged from the epidemic. But it’s getting closer: Since their peak in 2004, AIDS-related deaths have shrunk by over half, and new HIV infections have reduced by 40 percent since 1997.

Safe sex practices and pre-exposure prophylaxis (PrEP) medications have prevented many further infections, and the evolution of antiretroviral (ART) treatments have stalled the virus from replicating in people who already have it. Beyond allowing people with HIV to live completely normal lives, these drugs also prevent them from transmitting the virus to others once they reach an undetectable viral load. But in many communities, people living with undetectable HIV statuses still face stigma that marginalizes them as “dirty” and unsafe to have sex with. Here’s how the science disproves that.

To understand why someone who is HIV positive but whose infection is undetectable can’t transmit HIV to a sexual partner, it’s vital to understand both how the virus itself infects the body and how medications work to combat it. Left unchecked, the HIV virus hijacks CD4 immune cells, a type of white blood cell responsible for fighting off infections, to make more copies of itself. As their viral load (number of virus copies per milliliter of blood) skyrockets, an afflicted person’s number of CD4 cells plummets, leaving them vulnerable to opportunistic infections. Once the CD4 count dips below 200, HIV has caused AIDS.

The first antiretroviral drug used to treat HIV was called AZT. Originally developed in the 1960s as a cancer treatment, AZT interfered with DNA replication in a person’s HIV-infected, CD4 immune cells to prevent the virus from taking over their immune system. But it was also incredibly toxic, causing anemia, nausea, insomnia, and weakened immune systems in many patients. Over the past few decades, researchers have developed antiretrovirals that are far more effective and less damaging, says Christopher Hall, vice president of medical affairs for the San Francisco AIDS Foundation.

“The evolution has been to a pill that is extremely well-tolerated, taken only once a day,” Hall says. “That’s just an incredible development.”

ART medication gives the cells a hand in combating HIV, which prevents it from replicating. A patient’s viral load then begins to decline while their CD4 count returns to normal. Originally, scientists thought that no matter how low their viral load was or how healthy they were, someone living with HIV could still give the virus to a sexual partner. But by 2000, studies began showing that below a certain threshold, that risk was incredibly rare.

While each person diagnosed with HIV has their own treatment timeline, almost all providers will have their patients begin taking ART medication as soon as they’re diagnosed. Hall says that’s a shift from how things used to be: Doctors would wait to determine whether their patients were ready and able to take the drugs (the original meds needed to be taken up to four times a day and caused a slew of side effects).

Because modern-day ART medications have so few drawbacks, a patient can start treatment right after their diagnosis and immediately see their viral load drop. Hall says that’s also important for combating the stigma that HIV is a death sentence, because at this point, it isn’t.

“We want to say, ‘Hey, you can get on top of this right away. This is going to be easy for you to manage, relatively speaking. We’re going to help you,’” Hall says.

Depending on the patient’s condition, they’ll return to the doctor after about a month to discuss how they’re tolerating the medication. The provider will run tests on their kidney and liver function and check for anemia. They’ll also run a viral load test, which scans for any genetic material associated with HIV in the bloodstream to determine the number of virus copies per milliliter of blood. Once the medication has done its work and that number reaches 200 copies per milliliter (usually after about 6 months), a person is considered undetectable.

But why do doctors say “undetectable” if the virus can still be detected by the test? Hall says that’s a function of how specific viral load tests have become over the years. When a test that can only measure as low as 200 copies per milliliter arrives at that result, it’s likely that the patient could have an even lower viral load than that. But because the test can’t measure anything lower than 200, they’re deemed undetectable.

“There’s some nuances to it,” Hall says.

Two hundred is still the golden number for people living with HIV, because that’s the most specific test that was used in the studies that proved an undetectable person can’t transmit the virus. Hall says below that point, an HIV-negative person with a healthy immune system can easily fight off a couple hundred viruses as opposed to the millions contained in a milliliter of blood from a newly diagnosed person. Our skin and mucous membranes do an excellent job protecting us from invaders, even HIV.

“HIV is inefficient enough that, when present in low numbers, infection can be avoided,” Hall says.

Dave Watt, outreach manager for the Southwest Center for HIV/AIDS, fields all kinds of conspiracy-like questions from folks who are uninformed about HIV, down to whether or not mosquitoes can transmit the virus (they can’t, he says, otherwise everybody would have HIV by now). Over a decade ago, he founded the Friendly campaign, which aims to counteract the fear-based messaging that often surrounds the virus. Even after the CDC formally endorsed the “U=U” campaign (which asserts that undetectable HIV is untransmittable) in 2017, Watt says it can be tough to help people understand that medical truth.

“While science can’t say it’s impossible, that’s just not how science works,” Watt says. “We used to say ‘low risk’ or ‘minimal risk.’ And now the studies have shown that there really is no risk.”

In 2016, the groundbreaking PARTNER study, a large, international research initiative that studied 900 serodiscordant couples (i.e. one partner had an undetectable viral load and the other tested negative for HIV), found that even after multiple years of condomless sex, not one person transmitted the virus to their partner. A number of clinical studies have since verified this, and scientists say the risk of an undetectable person transmitting the virus to their HIV-negative partner is effectively zero.

ART can’t cure HIV—with today’s treatment options, an undetectable person will always test “positive” for the virus. And during the antiretroviral onslaught, the virus will retreat into “sanctuary” areas like the rectum or cervix, allowing it to begin replicating again if the person stops taking the drugs. The ART drugs can’t access those “sanctuary” areas very well, so they can’t eliminate every last virus left. But, when taken diligently, the meds keep HIV so well at bay that, effectively, they may have the potential to end the epidemic without scientists finding a definitive cure.

The concept of treatment as prevention (TasP) emphasizes the importance of immediately treating anyone diagnosed with HIV in order to get them to undetectable status as quickly as possible. Once they become undetectable and continue taking the medications, they’ll be unable to transmit the virus any further. If everyone living with HIV gains access to these lifesaving drugs, they can stop the disease in its tracks. But even when communities do have the resources, fear can stop them from seeking treatment.

Hall says when people fear the consequences of getting HIV and don’t realize that it’s no longer a death sentence, they’re less likely to get tested in the first place. This delay makes their conditions more difficult to treat because the virus has had a longer amount of time to take hold on their immune systems. But telling people that, at the end of the treatment, their risk of infecting others is essentially nonexistent can be a powerful tool in lifting that stigma.

Governments also have to catch up with the science. In the U.S., 29 states have laws that criminalize people living with HIV, whether it’s not disclosing their status to a sexual partner or being punished for physically transmitting the virus to their partners. Nine states have measures that enhance prison sentences for sex crimes when a person living with HIV is involved. In some cases, these sentences may be harsher than ones for murder.

Research shows that these laws don’t actually reduce virus transmission rates, and they can even discourage people from getting tested for HIV. States implemented most HIV laws during the height of the AIDS crisis, when a diagnosis was still a death sentence. But even with the proven advancements in treatment, the outdated legislation still haunts courts today. In 2015, Missouri resident Michael Johnson was sentenced to 30 years in prison for not disclosing his HIV-positive status to his sexual partners. He was just released from jail this summer after an appeals process.

“Stigma continues to be the greatest challenge in ending the epidemic,” Hall says.