More turkey and gravy? Turn on the printer 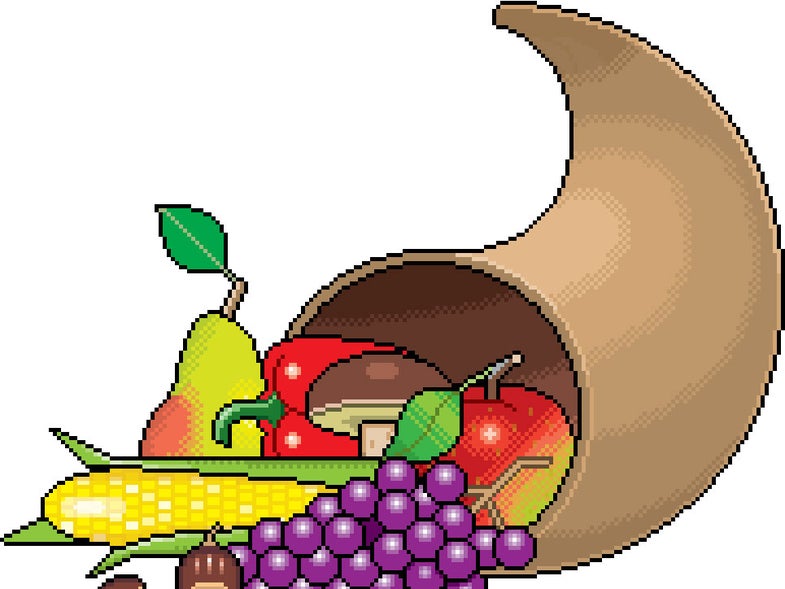 Future holiday meals might not emerge steaming from an oven but from the heated platform of a 3D printer. The machines have already begun to make food more sustainable, more individualized, and more interesting.

“Today, food and software are very big, but very separate pieces of our lives,” says Hod Lipson, a 3D-printing pioneer at Columbia University. “There is a lot of potential in combining them.” Before long, printers might be a staple in every modern kitchen, like the microwave, or the stove before it.

Here are six ways they could transform your plate.

Even local produce has to be delivered. That’s why food designer Chloé Rutzerveld came up with Edible Growth—printed spheres that contain yeast, spores, and seeds. In three to five days on your counter-top, they grow into living amuse-bouches of plants and fungi. Think Chia Pets, but tinier. And tastier.

Swappable “ink” cartridges make it easy to personalize printed foods. Each serving of mashed potatoes can have custom levels of vitamins and minerals, plus just the right amount of pepper. “Person A would receive this many milligrams of vitamin B12, while person B gets so many of omega 3’s,” says food innovator Kjeld van Bommel.

Insects produce far less water and air pollution than livestock. They can be ground up and used to print protein with whatever taste and consistency you prefer, says Dorothée Goffin, director of the Smart Gastronomy Lab at the University of Liège in Belgium. For the bug-averse, protein-rich algae works too.

Cooking can turn certain foods to mush. But 3D printers could be used as a tool to improve their texture. The result: products like vegetables that picky eaters actually want to eat. “Someday, we could print Brussels sprouts in a Mickey Mouse shape that has a crispy texture kids enjoy,” van Bommel says.

Printers can cater to the food sensitivities that affect some 250 million people worldwide. Peanut allergy? Lactose intolerant? No problem. Barilla already 3D prints pasta, so it’s not a far leap to imagine printing it gluten-free. “People think ‘I can buy that anyway,’” Lipson says. “But there are a thousand other foods you can’t buy.”

Printing doesn’t have to replace traditions; it can enhance them. Imagine a pie made to grandma’s specifications, with a crust shaped like the Mayflower, says Liz von Hasseln of printing company 3D Systems. “We’ll use the printer as a way for families to create new dishes, or twists on family recipes,” she says.

This article was originally published in the November 2015 issue of Popular Science under the title “Your 3-D Printed Thanksgiving.”