The Selfie Of The Future Is A 3D Figure 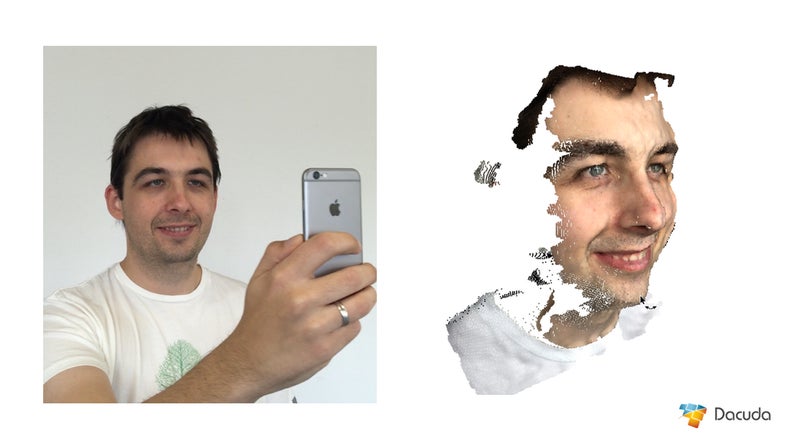 If you are waiting for the selfie trend to go away, make sure you’re in a comfortable spot. As selfies continue to dominate social media platforms, a new app from the Swiss company Dacuda plans to bring the selfie into the three dimensional world. The company just unveiled an app that puts sophisticated 3D scanning technology in the hands of anyone with a smart phone and reasonable hand-eye coordination.

And yes, the new app is built around an algorithm precisely tailored for taking selfies.

A beta version of the app, currently called 3DSelfie, will be available later this year and is set to be announced on November 23rd. However, the name 3DSelfie is a placeholder as the official name is still in the works and may change by then. In the meantime, Dacuda provided a preview earlier this month at TEDxCambridge 2015. Dacuda founder and Vice President Erik Fonseka recently spoke with Popular Science about the new app.

The app works by connecting mobile 3D scanning with related technology, namely 3D printing. As Fonseka sees it, the scanning-printing combination transforms the digital experience into something more complete and immersive.

“If people can capture everything that’s around them, and share it, then this would be like a dream come true,” Fonseka says.

Instead of hanging a photo on your wall you can create a whole statue.

“Today already there are many people who want to share their memories — so for example a wedding or a birthday, or if you are pregnant — and you can do that with photographs, but now you can also make these memories tangible,” Fonseka explains.

As Fonseka describes it, the guiding principle behind 3DSelfie is the democratization of technology. The new app enables nearly universal access to a system that would otherwise require special hardware, skills, and importantly, a lot of money.

In a unique approach to 3D scanning, the app creates a point cloud of an object by deploying algorithms similar to those used in robotics. That puts 3DSelfie a cut above first-generation apps for taking 3D selfies. These existing apps either employ GIF-like technology to create the illusion of 3D or they use head models that are slightly changed based on the scan input, which limits their ability to capture more minor facial variations among individuals.

“Unlike other solutions on the market we do not rely on the morphing of an underlying head model, which often results in unrecognizable generic faces. Instead we directly generate the high quality lifelike scans, that allows us to output polished 3D selfies that exquisitely feature your individual facial expressions,” says Fonseka.

The app also enables users to view the image on their smartphone screen in real time, providing a seamless, intuitive experience akin to that of shooting a video on your phone.

Fonseka makes a good case for bringing physical elements back into modern digitized life. Most of us have a compulsion to preserve and share what we see, and 3-D technology literally adds another dimension to that experience.

The new app follows on the heels of Dacuda’s 3DAround, another 3D smartphone scanning app. Like 3DSelfie, 3DAround is specifically tailored for a particular use. In this case, it’s taking shots of your dinner and other items of food.

If this all seems a bit frivolous, it’s frivolity with a purpose. Selfies and food shots are among the most popular and accessible for smartphone photography. Aside from the potential benefit to Dacuda’s bottom line, the focus on universal experiences adds an extra layer of democracy to the aforementioned democratization of technology.

Fonseka also anticipates a torrent of practical uses for smartphone 3D scanning combined with 3D printing. One advantage is to speed up the design process.

“When scientists want to build stuff, they build it, they improve it, there are various iterations…with 3D printing you can capture an element and multiply it, so you can try out several iterations,” says Fonseka.

Another mashup that Fonseka anticipates is 3D scanning with virtual reality and augmented reality platforms.

“You can put on goggles and then you can physically build machines, games, or a house,” explains Fonseka. “It’s more immersive.”

This could all come about sooner than you think, so start working on your selfie game now. By the end of this year, Dacuda expects to nail down partnerships for 3D printing as well as gaming avatars and a platform for reproducing built interiors.

Correction: This article has been updated to clarify the name of the app as well as its release date, and the images have also been updated to reflect the technology’s most recent approach.