I've been waiting for this gadget for three years. 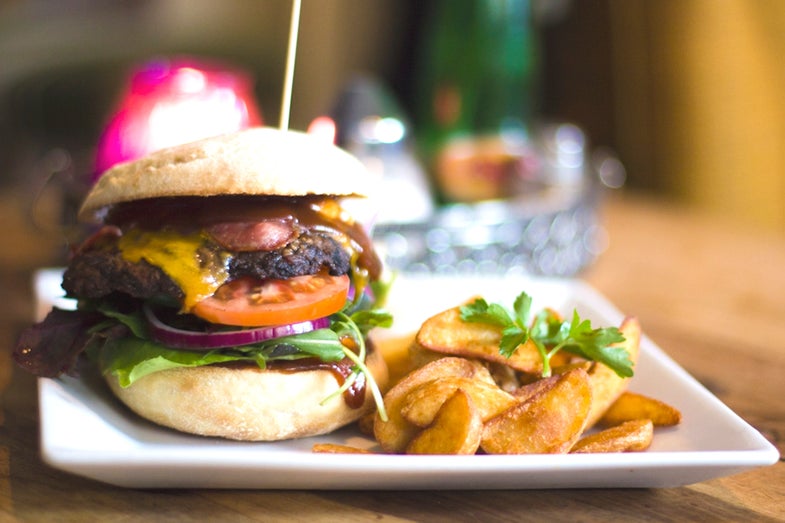 I could actually test this whole meal to see if it was actually gluten free or not. But let's be real—a gluten free bun would never look that tasty. Pexels user Salo Al
SHARE

In my nightmares, I’m eating an energy bar. I unwrap it, scarf the whole thing down, and then come to the instant, heart-stopping realization that I have just poisoned myself. I thought for sure I checked the label—I always check the label—but it doesn’t matter now because I’ve already swallowed. The gluten is already in my system.

This is when I wake up.

I know that it sounds melodramatic, even paranoid. I also know that if you experienced blinding pain, a gastrointestinal meltdown, and lasting internal damage every time even a smidge of gluten passed through your lips you’d be paranoid too. You’d pepper your waiter with questions about what exactly is in that sauce and hesitate to trust his casual “I think it’s fine” response. And if you had a way to check whether that waiter actually knew what he was talking about, you’d probably take it. If only for the vindication.

For years, I hoped for a device like that because I have celiac disease. My body overreacts to gluten and starts attacking my intestinal lining instead, so I can’t eat anything that’s made from the three gluten-containing grains: wheat, barley, and rye.

I have weirded out countless waiters with questions and sheepishly asked if they could please remake that salad because they put bread in the bowl when I asked them not to and now I can’t eat my $13 lunch. And for what felt like a lifetime, I had heard that some mystery company was developing a sensor that could help me feel confident in my food. The online celiac communities buzzed every time an article came out claiming a gluten sensor was in the works. My fellow-celiac cousin and I would mention it passingly when we were out to eat together, never truly believing we would ever be able to buy such a device.

And then, last week, I got it. The Nima. The thing I had been awaiting since my diagnosis nearly four years ago. And it wasn’t what I expected.

In my head, a gluten sensor could give me absolute certainty about my food. But reality, as always, is not that simple. In order to test for gluten, the Nima (like most allergen tests) detects proteins by reacting with them chemically. It uses an antibody designed to attach to the gluten protein, which can trigger a reaction that produces a visible signal like a color change to indicate whether gluten is present. To do that test, you have to load a pea-sized sample of your food into the Nima device in a one-time use capsule. It measures to the FDA standard for gluten-free designation, 20 parts per million, and displays a digital blue smiley face if it tests under that limit. And that means that all you technically know is that the food you just loaded into the Nima is gluten free. The rest of your plate is still questionable.

It’s important to note here, given all the complaints I’ve seen online, that the Nima isn’t intended to provide ultimate security. Shireen Yates, one of the co-founders, told me up front that they cannot guarantee that your whole plate of food is gluten free and that Nima is a supplement to your decision-making, not a replacement. They know they can’t offer complete assurance that your food won’t make you sick. They just want to give you more data so you can make a more informed decision.

Maybe it’s just my bias as a science writer, but I’ll always take more data—especially since my current situation has little of it. The cost of high-quality scientific data in your palm, however, is pretty high. The Nima device itself costs $279 and each one-time use capsule is about $5. That’s not an option that everyone can afford, at least right now, though if Nima does well and manufacturing costs come down we could see a drop in prices. Either way, this is an investment.

There are some red flags that are easy to spot, gluten-wise. Once, my pasta bolognese arrived with a piece of penne in it even though the menu explicitly stated that they only offered one shape of gluten free pasta: rotini. Two summers ago a waiter told me confidently that I could have the couscous, he was sure of it—right up until I reminded him that couscous is made from wheat. It’s hard to trust a restaurant after that and I would have loved to have a way to test my food at those places, even if that test couldn’t guarantee my safety.

And there are lots of other, more insidious ways that gluten sneaks into my food. The major culprit is cross-contamination, which is a prissy-sounding word for the significant amount of gluten that can get into food just from being in the same environment as gluten-ful ingredients. A worker cuts a regular hamburger bun, then goes to assemble my gluten free cheeseburger. A chef puts down my pizza on a cutting board that just had flour on it. It’s easy for cross-contamination to happen—so easy that I assume I’m getting a small amount every time I eat at a restaurant.

But some places make me more nervous than others. Fast food places, namely. Pizza joints and burger places are stacked high with food products liable to poison me. I avoid most of them, even some that claim to offer gluten free options, because it’s just not worth damaging my intestines. There is a small selection of fast food places that are more tempting—places that take precautions and talk to me honestly about their gluten free protocols. It’s at those restaurants that I’d want to use a gluten sensor because there’s a simultaneous danger of getting glutened and a potential of eating worry-free.

Putting Nima to the test

When I got my Nima in the mail, my first thought was of French fries. Specifically, Shake Shack’s French fries. Not because they’re the best (everyone is entitled to their own opinion on where to get the best fries, even though mine is the correct one: Pommes Frites on Macdougal Street), but because I’ve watched my friends eat them countless times. The thing about watching someone eat fries right in front of you is that you can smell them. They’re starchy and steaming and they permeate the air with a delicious oily scent that cannot be shaken from your nostrils. But most places that serve fries also serve battered foods, like onion rings, and cook both in the same oil. Previously, I had no way of knowing how much cross contamination might occur in that frying process. I hated the not knowing. I can’t under any circumstances eat a normal piece of bread, so that’s not even worth thinking about. But eating French fries fresh from the boiling hot basket was a possibility so tantalizing it made me salivate at the very thought.

This is how the idea arose to test fast food restaurants. I picked three—Shake Shack, Two Boots, and Melt Shop—to test gluten-free cheeseburgers, pizza, and grilled cheese, respectively. They all have protocols to try to keep cross contamination to a minimum, though none claim to be 100% gluten free. Most importantly, they’re places that I could commonly go for lunch or dinner with friends if I knew more about how much gluten I was exposing myself to.

In case you didn’t watch it, I found that Two Boots pizza had a small amount of cross contamination and that when I didn’t explicitly tell Shake Shack that gluten free was a necessity, not a preference, I could detect traces of gluten. When I reached out to those restaurants to let them know what I’d found, both emailed me back within a day to thank me for sharing the info and offer to collaborate on figuring out how to better communicate risks and take precautions. Color me impressed—I honestly thought all I’d get would be a repeat of their standard disclaimer.

On the flip side, the grilled cheese from Melt Shop, the fries, and the explicitly-stated-gluten-free burger from Shake Shack were all devoid of gluten. It took me two fry tests to be confident enough to try them since Nima can’t guarantee that every fry had under 20ppm gluten. I’m paranoid about my food and I was abundantly aware of Nima’s limitations as I pondered the probably-gluten-free fried taters sitting in front of me. I don’t think there are fries anywhere in the world worth waiting four years to taste, but as I crunched down on that crinkle cut my clearest thought was “Worth. It.”

A gluten sensor was never going to give me complete assurance. And yeah, there are things I wish the Nima did that it doesn’t. It can’t test soy sauce or alcohol because the gluten in those products has been broken down such that Nima’s antibody can’t reliably detect it. In an ideal world, I’d go to a whiskey bar with a friend and test every drink she orders to see which might be gluten free. Few of those companies verify if their products have gluten and I’d love to be able to drink more than Maker’s Mark. Perhaps someday someone will invent a way to test whiskey. For today, I’m content.

Though we didn’t feature it in the video, the accompanying Nima app offers some extra information. If there is gluten in your sample, the device tries to estimate how much—low or high—there might be. High gluten is anything above 100ppm, and though low gluten should theoretically be somewhere between 20-100ppm the Nima can’t definitively say since that distinction depends in part on the type of food and the weight of the sample. The pizza and burger that I suspected had cross-contamination both measured as low gluten, and as a control I tested some of the regular hamburger bun and got a high gluten reading. One control isn’t exactly scientific, but it’s still reassuring.

Perhaps the best feature is the data-sharing aspect. Every time your Nima runs a test, the app prompts you to log it and provide details. Where did you get the food? What did you get? Did you specify whether it had to be gluten free? All of that info goes into a shared database so you can search for individual restaurants and see what results other users got (you can log it anonymously, in case that worries you).

I’ve been waiting for Nima for three years and no, it’s not what I expected. But it’s still kind of wonderful.