Sonar for your hands 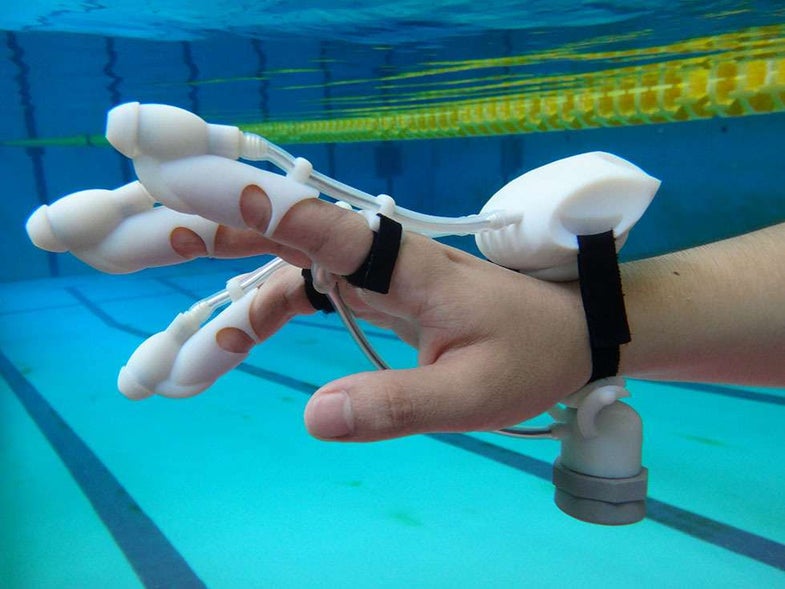 A haptic sonar glove developed by Ph.D. candidates Aisen Carolina Chacin and Takeshi Ozu of the Empowerment Informatics program at Tsukuba University in Japan allows wearers to “feel” objects that are just out of reach in underwater settings. In situations where there’s limited visibility, like flooded streets in an emergency, gloves like these could prove especially useful.

Inspired by the dolphin, IrukaTact (iruka means ‘dolphin’ in Japanese) uses echolocation to detect objects below the water, and provides haptic feedback to the wearer with pulsing jets of water. As the wearer’s hand floats closer to a sunken object, the stronger the jets become, and the wearer feels more pressure on her fingertips. Since the apparatus has minimal bulk, the wearer can grasp objects easily after they’ve been found.

“Our overall goal was to expand haptics,” says Chacin. “How can you feel different textures or sense depth without actually touching the object? Vibration alone doesn’t cut it for me, or most people, for that matter.”

The glove uses a MaxBotix MB7066 sonar sensor, three small motors, and an Arduino Pro Mini, and is programmed to send signals to the three middle fingers in silicone thimbles. The motors are placed on top of the index, middle, and ring fingers, and pump water from the surrounding environment. This water is siphoned onto the wearer’s fingertips to create pressure feedback. The thumb and pinky are left free in order to reduce clunkiness, save battery power, and improve movement. A silicone ring around the middle finger, connected to the sensor at the wrist by a small tube encasing the sensor’s wires, keeps the sensor parallel with the hand and allows it to read information from the direction the palm is facing. The sensor can receive and send signals from up to 2 feet of distance underwater, though Chacin says in the future it’d be possible to expand this range.

Chacin and Ozu, in collaboration with Ars Electronica, designed the glove as a DIY kit in hopes that the glove could potentially be used to search for victims, sunken objects, or hazards like sinkholes.

The glove could also be paired with a device like the Oculus Rift and outfitted with gyroscopes and accelerometers to provide haptic feedback in virtual reality.