Weapons manufacturers don’t typically enjoy boasting about a shotgun’s non-killing power, unless that manufacturer is Taser International. But even as... 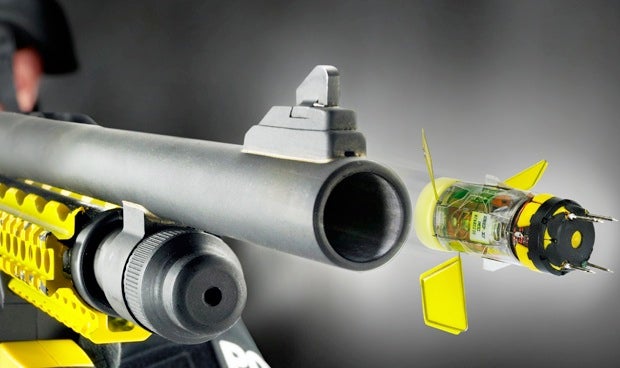 Weapons manufacturers don’t typically enjoy boasting about a shotgun’s non-killing power, unless that manufacturer is Taser International. But even as the leading name in “less-lethal” released a new stun cartridge for 12-gauge shotguns with a range of over 100 feet, some journalists point out that safety and field tests have yet to disclose public results.

The eXtended Range Electronic Projectile (XREP) first surfaced a few years ago as a less-lethal alternative for the Marine Corps, which wanted to use the shotgun cartridge during room-clearing operations to nab potential baddies. The device is a wireless shocking projectile with a max range of 100 feet, or roughly twice the effective range of other 12-gauge less-lethal munitions. Taser is not marketing a shotgun of their own to accompany the round.

Wired’s Danger Room notes that Taser International has not revealed the results of field trials using the XREP. That could cause some hesitation for even the most eager would-be buyers, given that Taser weapons have attracted more than their share of controversy in the past. A United Nations committee previously deemed the Taser effect as a form of torture, and none of us are likely to forget “Don’t Tase me, bro” any time soon.

Still, Taser has plowed ahead with a full-bore marketing campaign for its next possible successor to the XRED cartridge, during the run-up to its annual conference on July 27. The mysterious X3 device has already begun building its social capital on Facebook and Twitter with messages such as “Check out my color screen. Like a Tele-Tubby … only a little more intense!”

The teases have revealed little actual info, but a Taser press release highlights that the X3 will be the “first multi-shot ECD (electronic control device) capable of simultaneously incapacitating multiple targets.” That could put some real scatter in less-lethal shotgun action, but also raises potential safety and abuse questions.

For now, rest assured that the X3 probably won’t go off accidentally. A YouTube video shows the device being subjected to electric shocks, and other tests have apparently involved the cartridge “doing 4 foot free-falls on concrete at 20 below,” according to a tweet from X3.