And the Pentagon hopes to deploy it next year 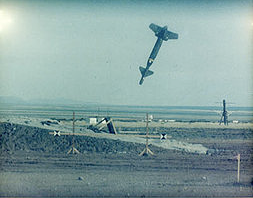 The Pentagon is trying to speed up the deployment of an ultra-large bunker-busting bomb, which would constitute the largest non-nuclear bomb the U.S. has ever used. The Massive Ordnance Penetrator, or MOP, is a 30,000-pound bomb that would dive deeper than any previous bomb, and could be strapped to B-2 or B-52 bombers by July of 2010.

The MOP is 20 feet long and can penetrate bunkers up to 200 feet before exploding. At 15 tons, the MOP is a third heavier than the previous “mother of all bombs”, the GBU-43/B Massive Ordnance Air Blast bomb, which was only 10.5 tons. The MOP also packs a whopping 5,300 lbs of explosives, which is 10 times the amount its predecessor bunker-buster, the BLU-109, carried. Basically, it’s massive.

The push for accelerated deployment is due to the increased perceived nuclear threats from Iran and North Korea. It’s believed that many of their nuclear programs could be in development underground, below levels of current bunker-busting bombs’ range. The Pentagon intends the rapid deployment to send a message that the United States is tweaking strategies to address new threats. And nothing is more American than advertising the sheer size and tonnage of the bombs hanging below our jets.