Video: Taser Tests New Tri-Fire X3 On Their Own Employees

Taser has been breathlessly fanning the hype flames for their newest “less lethal” weapon, the X3. Now, they’ve sent us... 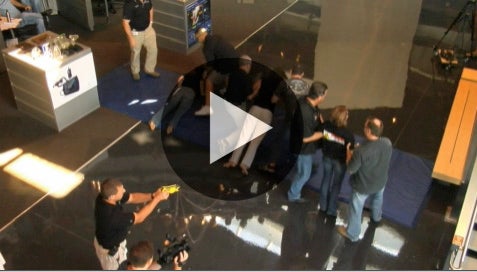 Taser has been breathlessly fanning the hype flames for their newest “less lethal” weapon, the X3. Now, they’ve sent us the first video of it in action, striking three unlucky Taser staffers who (I can only assume) volunteered for the inglorious task of being guinea pigs.

As you can see, the gun fires off three rounds in quick succession with no need for reloading.

Beyond the very general details of the X3, Taser is still keeping mum with the specifics on how it works, confirming only that the X3 fires equal or less voltage than their current model, the X26, which can unload 50,000 volts at its peak. Taser claims the actual shock delivered to the body is in the range of 400-1,200 volts. The X3 also includes a feature that reports back on whether the shock delivered was “good, partial or no connection.”

Something about the sound of Tasers still fills me with dread, and seeing the controlled, almost ritualistic way in which these three poor souls are slowly helped to the ground right there in Taser HQ after being zapped isn’t helping that feeling.

Just a few days ago, a Taser shotgun, and now this. Lord can only guess what’s next.