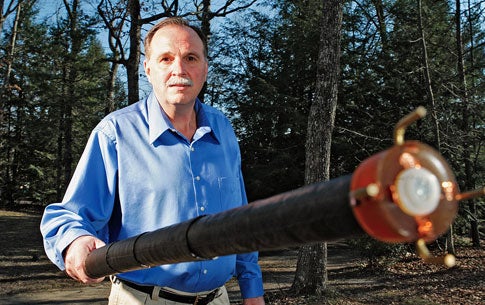 Fred Pearson´s electrified telescoping Neuroscrambler can drop a person to the fetal position from three feet away.

_How do you prevent insurgents from shooting down choppers? How do you keep a cast from itching? How do you reinvent the brick? You sketch. And then you work: nights, weekends–for years, if you have to. You blow all your money, then beg for more. You build prototypes, and when they fail, you build more. Why? Because inventing is about solving problems, and not stopping until your solution becomes real.

We’re currently rolling out the winners of the 2007 PopSci Invention Awards. We’ll be doling out a new innovation each day, so keep checking back for more of what the world’s brightest inventors are currently cooking up. And if you just can’t wait, pick up a copy of the June issue that just hit the stands.-Eds._

I’m in a dark garage in the desolate woods of a small mountain town, and Fred Pearson is about to send 50,000 volts of electricity through me. To stop him, I dodge the sparking claw of electrodes at the tip of his yard-long rod and grab hold of the device, hoping to take it away from him. A shock surges through my hand, leaving me weak and trembling from fingertips to elbow.

“You asked for it,” Pearson says. He’s right. I’m playing guinea pig for a prototype of the Tennessee inventor’s Stunstick Neuroscrambler, a new nonlethal weapon that causes enough pain to make any mugger reconsider his career choice.

Pearson dreamed up the weapon six years ago while watching his 10-year-old son slash the air with a toy light saber. He noticed the ease and speed with which the boy’s sword could telescope to three times its length. If electrified for real, it would enable the person wielding it to remain beyond arm’s reach of an attacker–something no handheld stun weapon can do. “That could be a game-changing advantage in a real-life scenario,” says New York-based martial artist Allain Atienza, who trains civilians, FBI agents and Army Special Forces in close-combat fighting. The problem with most such devices is that you have to be in contact with your attacker to use them, notes Sid Heal, the commander and technology-procurement specialist at the Los Angeles County Sheriff’s Department. “I don’t know a single police officer who has purchased [a stun gun] for his wife or daughters.”

Despite the fact that Pearson, a 51-year-old drywall contractor, had never invented anything, he knew he could solve this problem. He took apart his son’s toy, wound fiberglass tape around the shaft, lined it with wire, and augmented the electronics. Two weeks later, the three-milliamp, 50,000-volt Neuroscrambler was done. Press a button, and the entire shaft becomes electrically charged, making it virtually impossible to disarm the operator. “You can’t take what you can’t touch,” Pearson says.

Like other stun devices, the stick works by delivering a high-voltage, low-amperage electrical charge that overrides messages from the brain to the muscles, leaving the victim unable to control that part of his body. But, unlike any other weapon, it can also act like a Taser, the weapon most often used by police. A Taser delivers higher voltages and, by making contact in two points, contracts muscles throughout the body, causing the subject to collapse.

That versatility is a boon for cops, who don’t always want to Taser an attacker into submission, Heal says. “Sometimes we just want to get a person to stop doing whatever it is he’s doing.” Heal is eager for Pearson to begin human-effects testing-a first step to LASD adoption-which should happen later this year at the Army’s Target Behavioral Response Laboratory in New Jersey.

As I shake my dead arm, trying to restore sensation, I don’t envy the test subjects. “That wasn’t so bad,” I lie. “Next time,” Pearson tells me, “I’ll put in fresh batteries.”