There’s no fricking laser beams attached to sharks, but Dr. Evil might still be jealous. The U.S. Navy wants to... 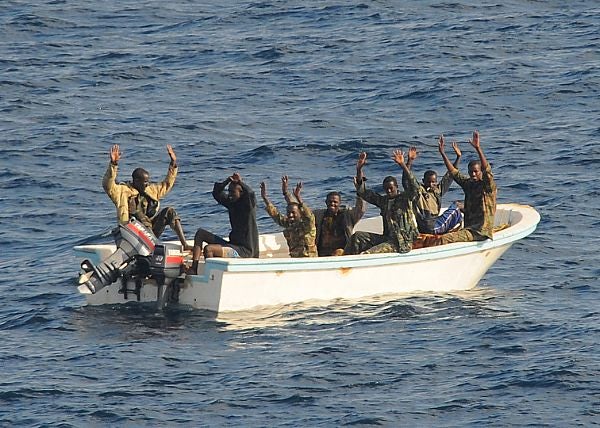 090211-N-1082Z-111 GULF OF ADEN (Feb. 11, 2009) Suspected pirates keep their hands in the air as directed by the guided-missile cruiser USS Vella Gulf (CG 72) as the visit, board, search and seizure (VBSS) team prepares to apprehend them. Vella Gulf is the flagship for Combined Task Force 151, a multi-national task force conducting counterpiracy operations to detect and deter piracy in and around the Gulf of Aden, Arabian Gulf, Indian Ocean and Red Sea. It was established to create a maritime lawful order and develop security in the maritime environment. (U.S. Navy photo by Mass Communications Specialist 2nd Class Jason R. Zalasky/Released). Mass Communication Specialist 2nd Class Jason R. Zalasky
SHARE

There’s no fricking laser beams attached to sharks, but Dr. Evil might still be jealous. The U.S. Navy wants to test a high-powered laser against the threat of small boats or even jet skis carrying RPG-wielding riders.

Northrop Grumman came away with the $98-million contract for the Maritime Laser Demonstration (MLD) in early July. Next up: installing a prototype of the laser on a ship and testing it on a remote-controlled small boat within the next 18 months.

This may sound like overkill, but the Navy’s excitement over the weapon comes from its “graduated response” capability. The same laser can first identify potentially threatening watercraft, and then use illumination to warn the intruder away from Navy warships. As a last resort, the laser can dial up to high-power mode and strike either the craft’s motor or hull.

Such small craft have already proven a threat during the 2000 suicide attack on the USS Cole. Hostile groups such as Somali pirates also commonly prey on shipping by using fast-attack boats, despite a wide variety of low and high tech tactics being used against them.

MLD has already achieved an output of 105 kw during early testing, but there’s a ways to go before it’s ready for sea trials. Northrop Grumman told Aviation Week’s DTI that aerosolized ocean spray and other factors could scatter the solid-state laser beam.

Still, the U.S. Air Force has its flying laser cannon, and the Army also wants to deploy a defensive laser. So perhaps it was inevitable that the Navy would want to give the futuristic weapon a try.