A Homemade Crossbow Designed To Impale A Car Door [Video] 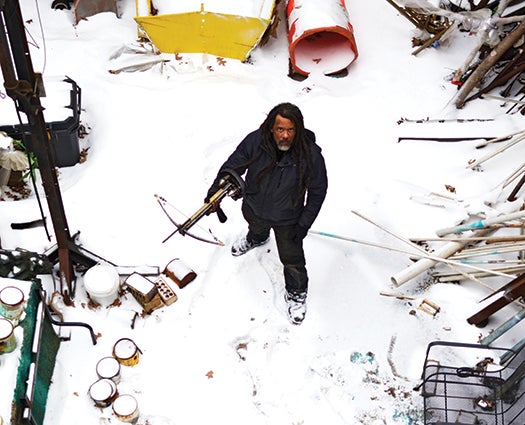 English philosopher Thomas Hobbes believed that men living in anarchy would lead “solitary, poor, nasty, brutish, and short” lives. So as much as I’d enjoy rebuilding civilization from piles of trash after an apocalypse, I’d first worry about a way to send petrol-marauding punk rockers scrambling and make infectious zombies take a dirt nap.

A gun would do the trick. That is, until my ammunition ran out. Then I’d just have an awkward club. A crossbow, on the other hand, would mean business: The weapon has a fierce reputation for raw power and accuracy, and ammo can be made or retrieved with relative ease.

Going into this build, my crossbow knowledge was limited, but I knew I wanted something quiet, compact, and powerful enough to punch through our contemporary version of armor: a car. If my crossbow could shoot through a car door, I reasoned, then it would be a success.

A bowed weapon’s strength is measured by its draw weight in pounds. The greater the pull on the prod (or bow), the more energy a bolt (or arrow) will deliver. I recovered a leaf spring from a truck chassis thinking it’d make a good prod. The power estimates I calculated seemed crazy, yet valid: Bending the 3/8-inch-thick bar just two inches could pull 500 pounds. That kind of tension, coupled with a dense bolt, would create a force to be reckoned with.

I fashioned whatever I could find in my scrap bin into functional parts. I made a receiver to hold the trigger from an old metal pipe, and a winch from a threaded rod and hoisting hooks. An aircraft cable served as a string, a six-inch chunk of rebar as a bolt, and a discarded bike seat as a shoulder brace.

After days of tinkering, it was time to fire the crossbow—and that’s when the leaf-spring prod revealed a disastrous flaw. Years of bouncing along roads created hidden stress fractures in the metal, which, partway through cocking, burst into shrapnel. (Luckily, none of it hit me.) I plan to rebuild the crossbow with a new leaf spring, but the surest post-apocalypse plan is to raid a sporting-goods store for a bow and some arrows. I’d never give a medieval archer a run for his money, but at least I’d send the dimmest zombies lurching elsewhere.

Warning: Don’t even think about attempting this project. You’ll shoot your eye out, kid.