How A Radiator Retrofit That Could Save The U.S. Billions Went From Bedroom To Boardroom 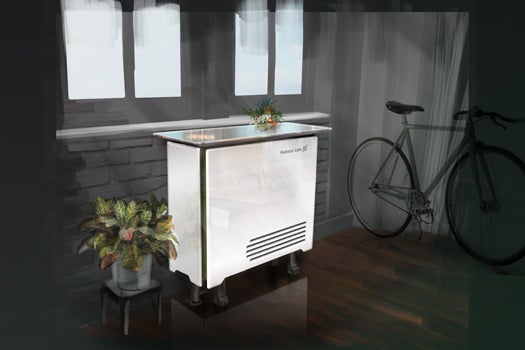 In 2011, Marshall Cox was living in a university-owned studio apartment in Morningside Heights. His twin brother, a ballet dancer, was living with him temporarily while performing in a Broadway show. Sleeping near the open window, his brother complained about the cold, while on the other side of the steam-heated apartment, Cox was too hot.

To shut him up, Cox, then a PhD student in electrical engineering at Columbia University, developed a radiator retrofit that can regulate the temperature in steam-heated buildings. Now Cox’s freshly formed startup Radiator Labs is developing the retrofit for commercial use. The Thermostatic Radiator Enclosure is scheduled to hit the market before next winter. How Cox turned a home-improvement hack into a commercial contender can be credited in large part to his own entrepreneurial determination–though help from Columbia’s technology transfer process didn’t hurt, either.

The idea came about as Cox, 33, chatted about his heating woes with his advisor, Ioannis Kymissis, who runs the Columbia Laboratory for Unconventional Electronics, a group that researches thinfilm electronics. “It was just sort of a casual conversation,” Kymissis says — one of a thousand different ideas he and Cox bat around each week. But this one Cox went ahead and built, putting together a prototype and testing it within his overheated studio apartment. 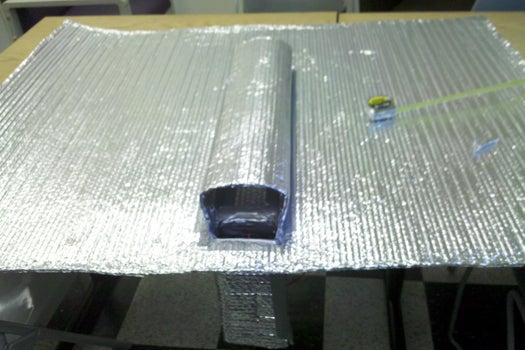 Cox’s first prototype was built using foil-faced bubble wrap, duct tape, two fans and an arduino microcontroller for data logging. It was installed under a loft Cox had built in his studio.

The invention Cox calls a “glorified oven mitt” fits around your single-pipe radiator and fixes the uncontrollable temperature swings most steam-heated units experience. Today, most new buildings are heated through forced hot air or hot water. But older buildings, especially those built before World War II, use steam heat, and in the 1970s, the rise of double-paned glass windows, which are excellent insulators, radically changed the amount of heat needed to keep a room warm — and changed it by different amounts for each room — causing those dramatic temperature swings. This is especially problematic in apartment buildings, where the boiler is all on, or all off, for everyone–there’s no halfway with steam heat. So buildings have to cater their heat consumption to the coldest apartment in the unit, leaving residents in some apartments hot and bothered while other units feel comfortable. It isn’t just unpleasant, it’s bad for the environment: Up to 30 percent of the energy generated by steam heated radiators goes to waste. New York City, an area that uses 20 percent of the nation’s steam heat, wastes hundreds of millions of dollars every winter keeping many of its residents uncomfortable.

Cox’s “glorified oven mitt” works by trapping heat so that the heat doesn’t escape into the room. Some heat leaks out of the cover, but ideally only enough to heat the room on winter’s warmer days. When a sensor outside the enclosure determines that the room is too cold, an automatic fan pushes more hot air out of the enclosure and into the room. When the fan is off, the enclosure heats up, trapping the energy that would have been wasted overheating the room in the system as steam, which can then be used to heat colder parts of the building. Cox estimates that if the millions of U.S. housing units with steam-based radiators adopted the technology, they could save billions of dollars in energy costs and reduce carbon emissions by more than 6 million tons–the rough equivalent of removing 1.25 million automobiles from the road. 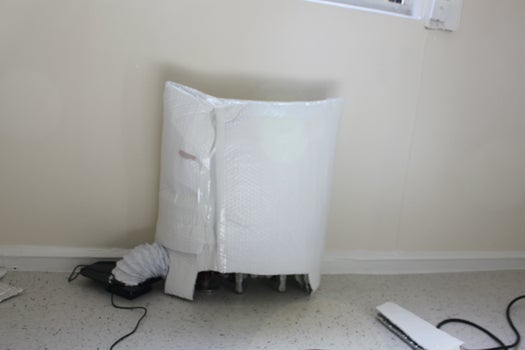 For the first pilot at Columbia University, Radiator Labs upgraded to a higher-powered fan and designed their own control board to connect all the systems in the building to a central control computer in the boiler room.

After building the original prototype, Cox submitted an invention report form to Columbia Technology Ventures. Columbia Technology Ventures is the university’s technology transfer office. Its mission is to “facilitate the translation of academic research into practical applications, for the benefit of society.” In the process, it helps students and faculty file patents, set up companies and network with industry professionals to help commercialize the research done on campus.

Columbia paid for the initial fees associated with filing a patent (which can cost anywhere from $5,000 to more than $50,000) and helped Cox set up a company. Out of the hundreds of inventions Columbia Technology Ventures deals with each year, only about 15 become startup companies. (More commonly, the tech transfer office helps researchers sell their inventions to existing businesses.) “In order to have a startup you need to have a lot of elements in place,” Orin Herskowitz, the executive director for Columbia Technology Ventures, explains. The team involved in the project needs to have the right combination of business and technical know-how, and it has to be a product that has the potential to attract investors. 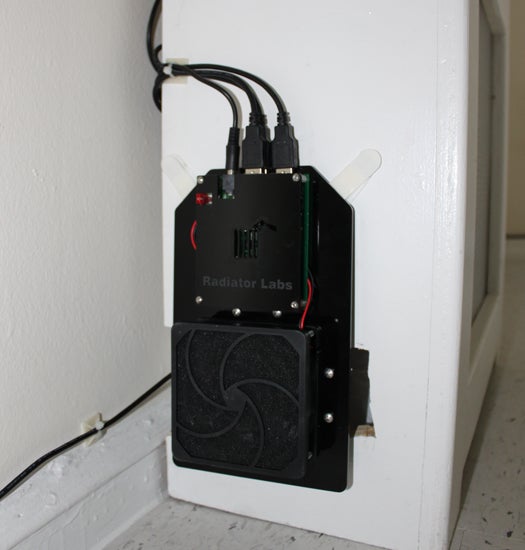 Most of the radiators in the Columbia University pilot were already encased in wooden/metal enclosures, so tenants didn’t see much of an aesthetic difference. But it did use a 12V fan, an upgrade from the two 5V fans required to push hot air out of Cox’s initial prototype.

“Radiator Labs is perfect in that sense,” Herskowitz says. The idea could stand on its own — it wasn’t an incremental change in an already established technology from a big company like IMB — and could be manufactured for a reasonable price. “[Cox] came to us with a great idea that was trying to solve a real need in the marketplace.” Herskowitz saw Cox as an entrepreneur who “was clearly not going to stop till he got this thing to the market.”

When Cox tested his first prototype, he used his own apartment and one radiator. To prove the invention would work on a larger scale, he needed a bigger apartment and more radiators. So Columbia Technology Ventures connected Cox to Columbia’s facilities management group, which was more than happy to let him install an energy-saving retrofit–and test its viability–in a university-owned apartment building for free. Having free pilot rights “was hugely powerful,” Cox says, because most landlords wouldn’t have let him install unproven technology in their building. “We were such an early stage company.” 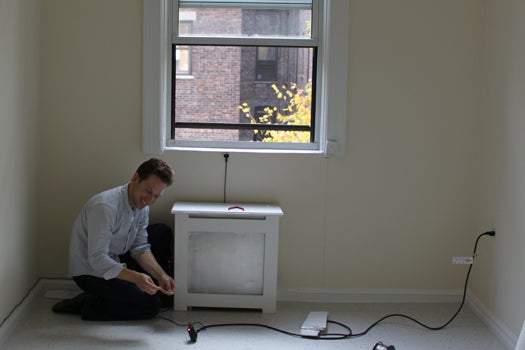 He built wireless capability into the Thermostatic Radiator Enclosure system so that it could connect to the Internet, giving him the ability to look at centralized data from the pilot building and data collected in a control building (also university-owned) next door from anywhere. Unfortunately, he ran into problems with the boiler in his control building, which skewed the data. But the pilot provided practical lessons nonetheless. “We learned a ton of people hate loud fans,” Cox explains. “Aesthetics were an issue.” The company now had much more data than before on the product, as well as pictures and testimonials from people in the pilot building. 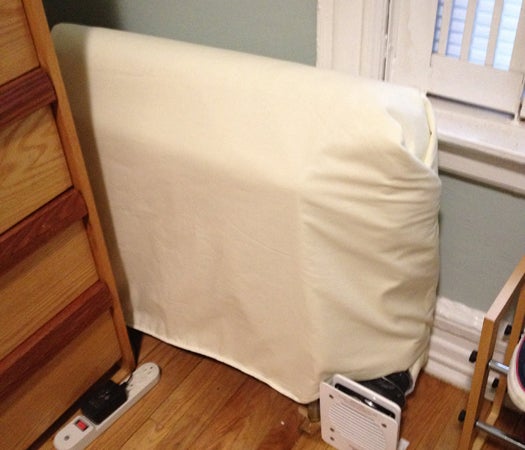 With the funds from winning the MIT Clean Energy Prize, Radiator Labs upgraded their enclosure material with better insulators and added a flame-resistant cotton cover. The control board was altered to connect to a cloud server via a cell connection, so that Cox and his team can receive updates in real time and can control individual units remotely.

That allowed Cox and his team to take Radiator Labs out on the road, to compete in small business-plan competitions. Depending on the nature of the product, turning an invention into a marketable product can cost anywhere from a few thousand dollars for something like an iPhone app to hundreds of millions of dollars for pharmaceuticals. Columbia covers some upfront costs, but does not fund the entire process. In the spring of 2012, Radiator Labs took $221,000 home as the winner of the MIT Clean Energy Prize, an energy entrepreneurship competition supported by the Department of Energy and the Massachusetts utility company NSTAR. With funding from the Clean Energy Prize, Radiator Labs had the ability to become a serious corporate entity.

Now, the product is in a late pilot stage, being tweaked for the commercial market. It should be available this year, in time for the heating season, or next year at the latest. An early stage version of the product might include the option of a wireless receiver, which could allow for direct boiler control and Internet connectivity. It could even give you the ability to adjust the temperature of your apartment from your cell phone. For now, though, the focus is just on getting the product ready to sell. It’s likely it’ll be available for entire buildings — since landlords control and pay for heat, they’ll be the ones that see the energy savings. Cox — who successfully defended his dissertation in October and now works full time on Radiator Labs — also envisions the product as something you could buy for your personal comfort. His goal is to design something easy enough to install yourself, something you could pick up at a home improvement warehouse for just a few hundred dollars.