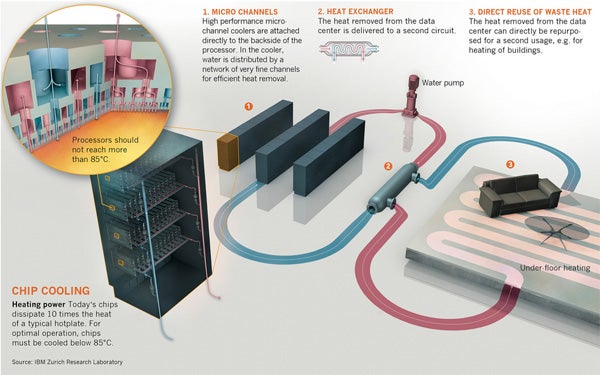 Supercomputers and massive data centers carry huge energy costs when it comes to keeping their electronic components chilly. Now IBM is set to unveil its next big supercomputer, Aquasar, which keeps cool with a constant circulation of water at 140 to 160 degrees F, according to TechNewsDaily.

A system of tiny capillary-like micro-channels feeds the water through the IBM blade servers. Even better, some of the collected heat from the water will end up being released into the building heating system at the Swiss Federal Institute of Technology (ETH) Zurich. IBM teamed up with the university to develop Aquasar, which is set to debut next month.

The first trial run would just use a small computer, and create less than one percent of building heating, but later tests with larger server arrays could warm several buildings, or even create energy for sale. The micro-channeled system costs more than typical air cooling up front, but IBM expects to recoup costs after a year or so.

Such water cooling has already seen use in some server farms, except they used room-temperature water that did not provide the secondary benefit of building heating. A UK company has also come out with its own chilling system, involving liquid cooling bags.