Have you been dying to capture your entire life on video, but worried you’ll look like a weirdo with all... 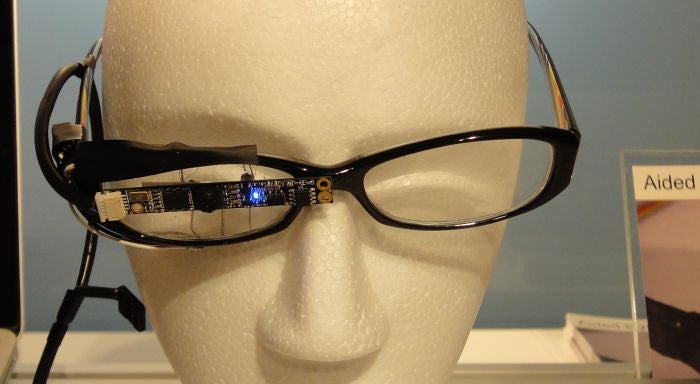 Sony's wearable eye-tracker records what the wearer is seeing. The little blue light indicates that the camera is recording. Tech-On
SHARE

Have you been dying to capture your entire life on video, but worried you’ll look like a weirdo with all those cameras and devices attached to you? Now you can just don your favorite pair of nerd glasses and track everything you do.

Sony Computer Science Laboratories, in collaboration with the University of Tokyo, has developed a lightweight lifelogging device that tracks the user’s eye movement, determining his or her objects of interest.

The glasses are outfitted with infrared LED lamps and receivers inside, and a camera on the outside that records what the user sees.

It works by directing an infrared light to the user’s eyeball. Photoreceivers detect where the light bounces off, determining the position of the pupil. The system then tracks the user’s gaze and films accordingly. A little blue light on the camera indicates that it’s filming.

The system logs everything the user looks at, and it can even recognize English characters, so it can determine what a user is reading — like a sign or a book title, for instance.

Anyone using the device would have to get used to a strip blocking part of his or her vision, but Sony plans to embed the system into the glasses’ frame, making it even less obtrusive. A GPS function is also planned. So far, the biggest problem is determining how to supply it with power, Sony says.