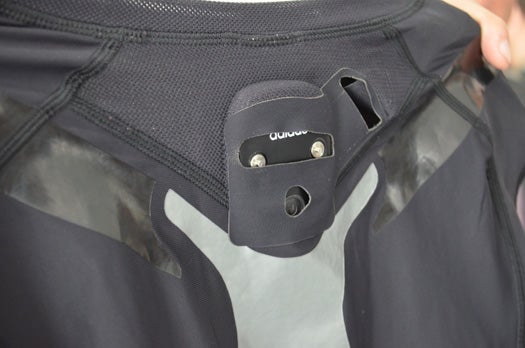 At Manhattan’s New Museum of Contemporary Art this morning, Adidas and Major League Soccer announced a huge new initiative that’ll make the MLS perhaps the most high-tech sports league in the world. Every single player will be wearing a small sensor that’ll track their movements and their health, which’ll be kicked back to the coaches in real-time, for monitoring on an iPad.

The system is called miCoach, and it uses two main pieces of hardware. There’s a “data cell,” basically a collection of sensors, that fits into a small pocket in the player’s “base layer” (read: fancy sports undershirt), sitting between the shoulder blades. But there are also some sensors woven right into the fabric of the base layer–this connected fabric is actually what senses heart rate and other vitals. The data cell itself is incredibly light, at only 52 grams, though it’s not as small as I expected. It’s got the usual array of sensors: a tri-axis accelerometer, GPS, magnetometer, gyroscope. Every player in all 19 teams (“clubs,” says the press release, because Europe) will wear it. 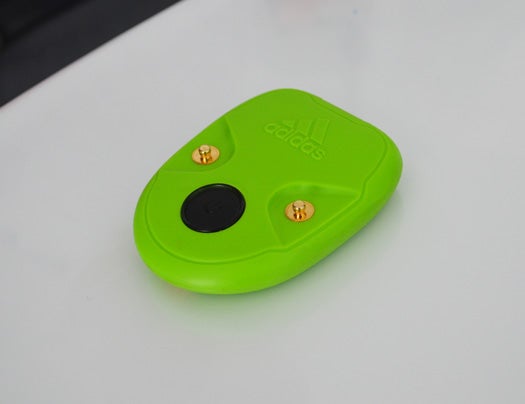 The data cell communicates via RF to the base station, a big hulking box with antennas sprouting off of it, which interprets the data and spits it out via Wi-Fi to the coach’s iPad, as well as storing it in the cloud so it can be accessed after the game. This all happens in real-time. 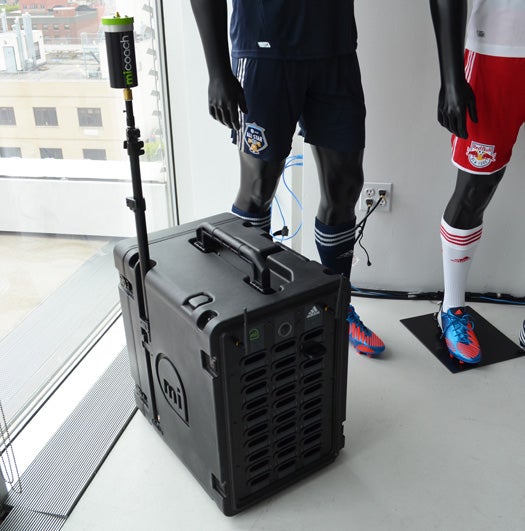 So what kind of stuff does it map? Mostly health and location. The GPS unit maps each player’s location, so you can see where they are and how they cover the field. But it’s probably most useful for health–it checks heart rate in real time, and that along with data from the GPS can extrapolate speed, rotation, acceleration/deceleration, and basic effort. When a player claims he’s putting in 110%, the coach can now consult an app and correct him with the precise actual number.

All of that data is sent in real-time, in nice easy-to-understand graphs, to the coach’s iPad, so the coach can see where each player is at, both in terms of physical exertion and location.

This is all part of a movement towards more data in sports, delivered in real-time–it reminds us especially of Babolat’s Play & Connect tennis racquet, which is more focused on performance than health (measuring ball speed and spin, that kind of thing). But at the moment, this data is all for the coaches. Adidas and MLS say they’re “exploring” the option of providing that data to broadcasts, but there are no distinct plans to share it with viewers. But we can easily see it going that way in the future. Imagine a shootout, in the finals of a long series. The striker steps up. Suddenly, the audience can see exactly how tired he is, see his heart rate, be able to compare it to the goalie’s. Whether or not the players will want that, who knows. But it’s pretty amazing. 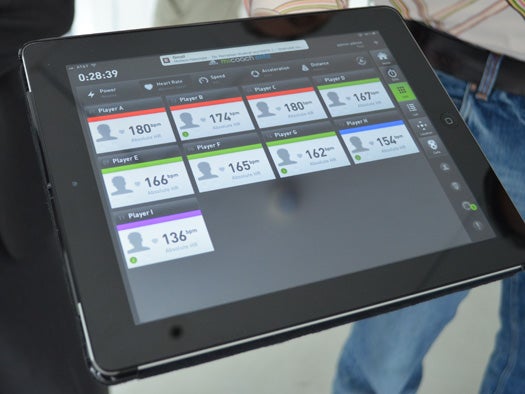 The first demo of miCoach will be this coming Wednesday at an MLS game in Philadelphia, but it’ll be rolled out in full in the 2013 season.