A group of scientists from the University of California-San Francisco is worried that a new generation of airport security scanners... 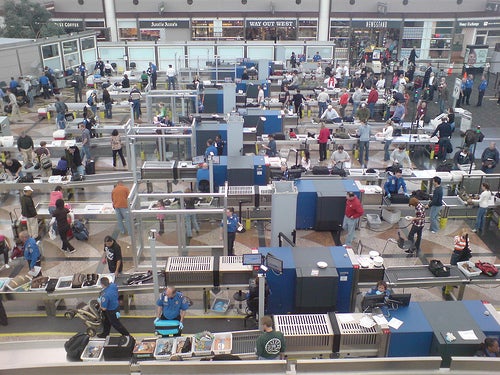 A group of scientists from the University of California-San Francisco is worried that a new generation of airport security scanners could present a cancer risk, NPR reports. But skeptics say people flying at 30,000 feet are already bombarded by cosmic rays, so a brief trip through an X-ray machine on the way to the plane is a drop in the radiation bucket.

After the “underwear bomber” incident on Christmas, the Obama administration ramped up deployment of advanced scanners that can spot explosives or weapons, NPR says. Some 1,000 new machines will be in use by the end of next year, roughly half of which are X-ray back-scatter scanners. The machines, which can look beneath passengers’ clothes, expose passengers to ionizing radiation for about six seconds.

So far, much of the concern about the scanners has come from privacy advocates — the scanners produce a detailed image of a person’s body without clothes. But David Agard, a biochemist and biophysicist at UCSF, says they may present a health risk, too. He wrote a letter last month to Obama science adviser John Holdren, asking for a more thorough review of the scanners’ potential health risks.

“Ionizing radiation such as the X-rays used in these scanners have the potential to induce chromosome damage, and that can lead to cancer,” Agard says in the letter.

The scanners’ potential harm comes from the low energies at which they operate. Most of the energy is delivered to the skin and immediately underlying tissue, Agard writes. If the dose were distributed throughout the entire body, it would be safe, but a targeted dose to the skin is too high, he says.

Certain people might be at a particularly high risk of cancer from radiation exposure, including the elderly; a small percentage of people with DNA anomalies, who represent about 5 percent of the population; HIV and current cancer patients; and children, Agard says.

But the Food and Drug Administration, the U.S. Army Public Health Command and researchers at the Johns Hopkins University Applied Physics Laboratory have said the machines are safe, according to the Transportation Security Administration.

NPR quoted an FDA radiation specialist who said the scanners put out far less radiation than what passengers get from cosmic rays. He told NPR one screening would be equivalent to spending four minutes in the air.

But Agard attacks that assumption, too, saying cosmic rays and chest X-rays are absorbed by the whole body. X-ray scanners that deposit their energy into the skin represent a different dose, targeted to a certain area, and their effects are not as well understood, he says.

David Brenner, head of Columbia University’s Center for Radiological Research, also expressed concern about the scanners during a recent a congressional hearing. He said the government should invest in millimeter-wave scanners, which have no known radiation risks. They produce images using radio waves rather than X-rays, and the TSA says the images are comparable in quality to the X-ray scanners. The cost is comparable, too, according to NPR.

The government has prepared a response to Agard’s concerns, but he hasn’t gotten it yet, according to NPR. Agard says further studies are needed.

“After review of the available data we have already obtained, we suggest that additional critical information be obtained, with the goal to minimize the potential health risks of total body scanning,” he writes.