Some seizures briefly incapacitate, while other seizures can be deadly. Knowing the difference is obviously of grave importance, but figuring... 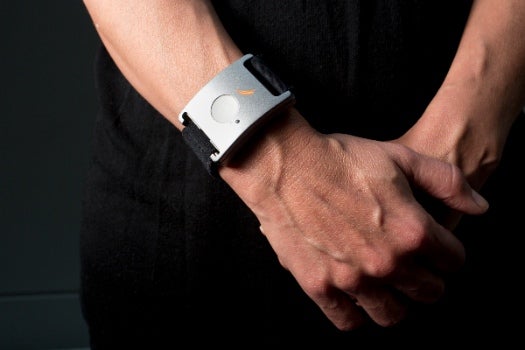 Some seizures briefly incapacitate, while other seizures can be deadly. Knowing the difference is obviously of grave importance, but figuring out which is which is difficult. So a team of MIT Media Lab researchers have developed a wristband that can tell the difference between the more benign breed of seizure and the one that might kill you, and may even be able to predict seizures before they strike.

The wristbands work by measuring skin conductance, or the ease with which electrical current can pass through the skin. Skin conductance changes for a variety of reasons mostly tied to how much you’re sweating. And purely by accident, one of the researchers found that skin conductance spikes during and even before a seizure.

Further experimentation and data gathering told the researchers a few more things related to skin conductance. For one, there’s evidence that what defines how deadly a seizure might be isn’t its duration or some other outward characteristic, but how quickly the brain bounces back afterward. Deadly seizures are associated with suppressed brainwave activity that lingers after the seizure is over. If the brain doesn’t return to normal quickly, the situation can quickly turn critical.

After equipping 11 children under evaluation for brain surgery with their wristbands, the team was able to record data from a total of 34 seizures. It found that the higher the skin conductance during the seizure, the longer it took brain function to return to normal afterward. In other words, high conductance appears to be linked to deadlier seizures. They also found that their wristbands sometimes picked up on seizures faster than EEG.

There’s not enough data yet to say outright that the wristbands can predict seizures ahead of time, though some data suggest they can. But the findings could have serious applications for those suffering from autism, epilepsy, or other conditions that make them prone to seizures. Wristbands like these could monitor skin conductance around the clock for signs of potentially deadly seizures, even calling for help should a particularly nasty seizure strike. More at New Scientist.