DIY EyeSeeCam Tracks Your Eyes’ Movement to Film What You See

A new German-developed head-mounted camera system tracks your eye movements, pointing a camera wherever you look and allowing you to... 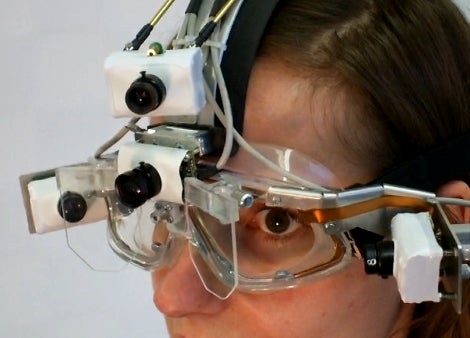 A new German-developed head-mounted camera system tracks your eye movements, pointing a camera wherever you look and allowing you to zoom in on your view.

Four cameras are involved: Two cameras measure your eye positions in 3D at super-fast speeds, up to 600 Hz, watching your eyes via an acrylic reflector. Another camera offers a zoomable view of what you’re seeing. The fourth is steered by servo motors to match whichever way your eyes move.

See it being used here to read a book:

Practical applications include video oculography, which is a method of recording eye position and eye movements. Ophthalmologists use it to study how patients’ eyes adapt to light and dark, and Robert Zemeckis uses it to make movies in Uncanny Valley.

Other uses could include strapping it to a surgeon who then films an operation for documentation and teaching purposes, or a scientist who could examine human natural visual exploration.

The cameras record video that is downloaded to a laptop for analysis with HeadCam software, according to the developers. The files contain an approximation of retinal content, so eye doctors can literally see what you saw and how your eyes acted when you saw it.