Limitless, Cheap Chips Made Out of DNA Could Replace Silicon

Silicon chips are on the way out, at least if Duke University engineer Chris Dwyer has his way. The professor... 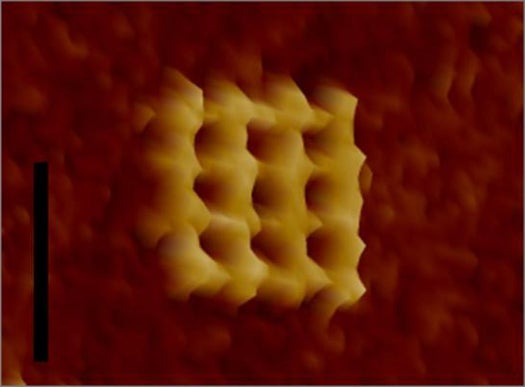 Silicon chips are on the way out, at least if Duke University engineer Chris Dwyer has his way. The professor of electrical and computer engineering says a single grad student using the unique properties of DNA to coax circuits into assembling themselves could produce more logic circuits in a single day than the entire global silicon chip industry could produce in a month.

Indeed, DNA is perfectly suited to such pre-programming and self-assembly. Dwyer’s recent research has shown that by creating and mixing customized snippets of DNA and other molecules, he can create billions of identical, waffle-like structures that can be turned into logic circuits using light rather than electricity as a signaling medium.

The process works by adding light-sensitive molecules called chromophores to the structures. These chromophores absorb light, exciting the electrons within. That energy is passed to a different nearby chromophore, which uses the energy to emit light of a different wavelength. The difference in wavelength is easily differentiated from the original light; in computing terms, it’s the difference between a one or a zero. Presto: a logic gate.

Rather than running computers and electrical circuits on electricity, light-sensitive DNA switches could be used to move signals through a device at much higher speeds. Furthermore, the waffle structures are cheap and can be made quickly in virtually limitless quantities, driving down the cost of computing power. Once you figure out how you wish to code the DNA snippets, you can synthesize them easily and repeatedly; from there you can create everything from a single logic gate to larger, more complex circuits.

A shift from silicon-based semiconductor chips would be a sea-change for sure, but semiconductors are reaching a technological ceiling and if the economics of DNA-based chips are really as attractive as they seem, change might be inevitable. DNA is already smart enough to be the foundation of life on Earth: why not the foundation of computing as well?