On a flying wing and a prayer 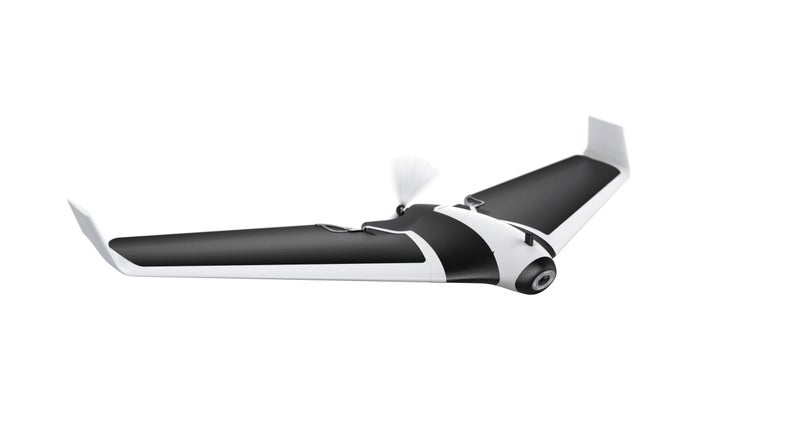 Parrot, the French consumer electronics company we know and love, has carved out a niche for itself with functional navigation tools for cars, wireless headphones … and Wi-Fi-enabled gardening aids. Yesterday, they unveiled their Parrot POT, which can at the press of a smartphone button, water a plant. A logical progression for the company, which also has some business making modest quadcopters. At the Consumer Electronics Exposition in Las Vegas, they unveiled their latest flying machine: a drone named Disco. It’s the company’s first fixed-wing aircraft.

Here are some things Disco can’t do:

Instead, Disco carries a 14-megapixel camera in its nose, and flies for up to 45 minutes. Like this:

At 1.5 pounds, the drone has to be registered with the FAA, but is otherwise light and nimble. It is launched by being tossed in the air, where autopilot takes over and should guide it to stable flight. It has a top speed of 50 mph, and can be controlled either by Parrot’s specially-made Skycontroller tool, or with an RC remote control. A pilot can also plot waypoints on a tablet map, letting the drone fly a predetermined path.

Unlike quadcopters, the fixed-wing Disco can’t hover, but it more than makes up for it with long flight times and gorgeous, swooping action. Parrot says the drone will be available in 2016.

Watch a video about it from Parrot below: