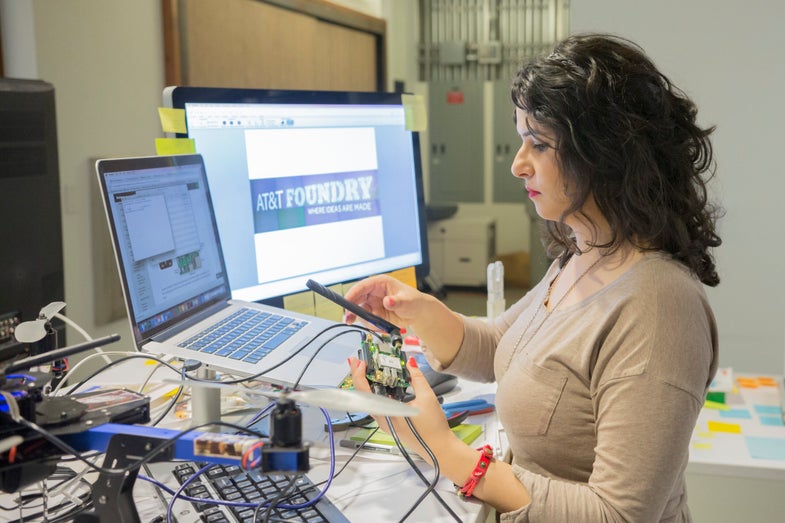 For small drones to truly rule the sky, they need to break their dependence on Wi-Fi. Most consumer drones now require a wireless network created by a phone or tablet, but that makes anything farther they a few hundred feet of range impossible.

AT&T announced today at the Mobile World Congress (MWC) tech show in Barcelona, Spain, that it’s exploring how to connect drones to its LTE data network. This would enable drones to make long-distance flights, and communicate with other drones and infrastructure. This push for better-connected drones is a collaboration with Intel, which already has plans to put its hardware in a number of drones.

In the United States, drones operated by consumers aren’t legally allowed to go beyond the line of sight of their operator, and anyone wishing to operate drones for business purposes must currently obtain special permission from the Federal Aviation Administration.

Businesses like Amazon and Google are already preparing for changes in that legislation. Both companies’ drone delivery services, Amazon Prime Air and Google Wing, actually rest on the current law changing.

AT&T’s infrastructure would make long-distance drone travel for delivery or industry use, according to Chris Penrose, senior vice president of Internet of Things AT&T Mobility.

“We’ve been building our networks to connect those on the ground, and now we’re building that to the sky,” Penrose said.

Through the proposed new AT&T drone LTE network, drones would not only be able to send flight data and give real-time data to its operator, but also communicate with connected infrastructure and other drones in the sky. This would help avoid mid-air collisions, no-fly zone avoidance, and even staying clear of bad weather.

Much of this network infrastructure is going to be ported from AT&T’s work with connected cars, Penrose says. AT&T has its LTE network already communicating with more than 7 million cars on the road. The security, safety features, and hardware diagnostics that are being deployed in LTE cars will all help inform drone efforts, as well as inter-car and car-infrastructure communication.

However, AT&T isn’t the first to connect drones to LTE. In December, Verizon announced a similar strategy, connecting a drone that surveyed vineyards to its LTE network. However, Verizon partnered with drone maker PrecisionHawk for that project, while AT&T has more mainstream collaborators, including consumer drone companies Yuneec and DJI.