This Flatworm Injects Itself In The Head With Sperm

Minding its own business 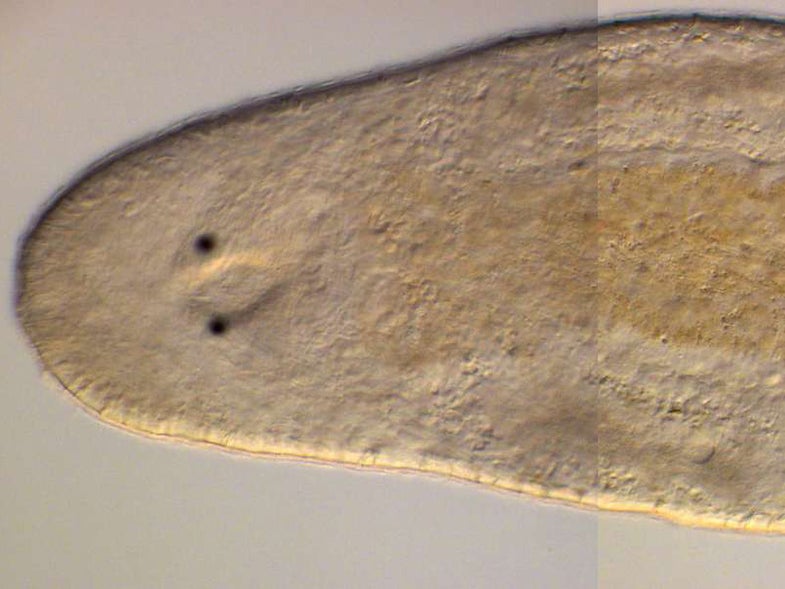 When these flatworms get lonely, they have sex on the brain.

In a study published in Proceedings of the Royal Society B, researchers observed the mating habits of the flatworm species, Macrostomum hystrix, and found that in the absence of a mate the hermaphroditic worm will fertilize itself with a very peculiar “selfing” mechanism. The microscopic worms will take their needle-like male sex organ at the tip of their tail—or as I like to call it their “selfing stick”—and will pierce their head and fill it with sperm. The sperm will then travel down the body to where the eggs are located near the tail.

Since the flatworms have a highly transparent body, the team of zoologists at the Universities of Basel and Bielefeld were able to see what was happening inside the worms by just observing them under a microscope. To find out if the worms only self-fertilized when there were no other mates, they isolated some in petri dishes while keeping others in groups. After waiting several days, they scored the amount of sperm the worms received in their head, tail, and gonad region. The worms in groups had a large number of sperm in their tails, however the isolated worms had very few sperm in the tail and a lot more in their head, suggesting that this behavior mainly occurs during mating stress.

“As far as we know, this is the first described example of hypodermic self-injection of sperm into the head,” said lead author of the study, Steven Ramm, in a press release. “To us this sounds traumatic, but to these flatworms it may be their best bet if they cannot find a mate but still want to reproduce.”

There are a lot of other creatures that reproduce asexually, including some sharks, lizards, and ants. But it does come at a price. When an organism reproduces asexually, all of its children will be clones of itself, whereas sexual reproduction provides the opportunity to mix in new genes that may help the offspring. Asexual reproduction also reduces the genetic variation in the population. When the population becomes too genetically homogenous it runs the risk of being wiped out by some environmental change like a bacteria that none of the population have gained a resistance to.

The researchers don’t know whether the flatworms are harmed when they puncture themselves with their sex organs, but sometimes love hurts.