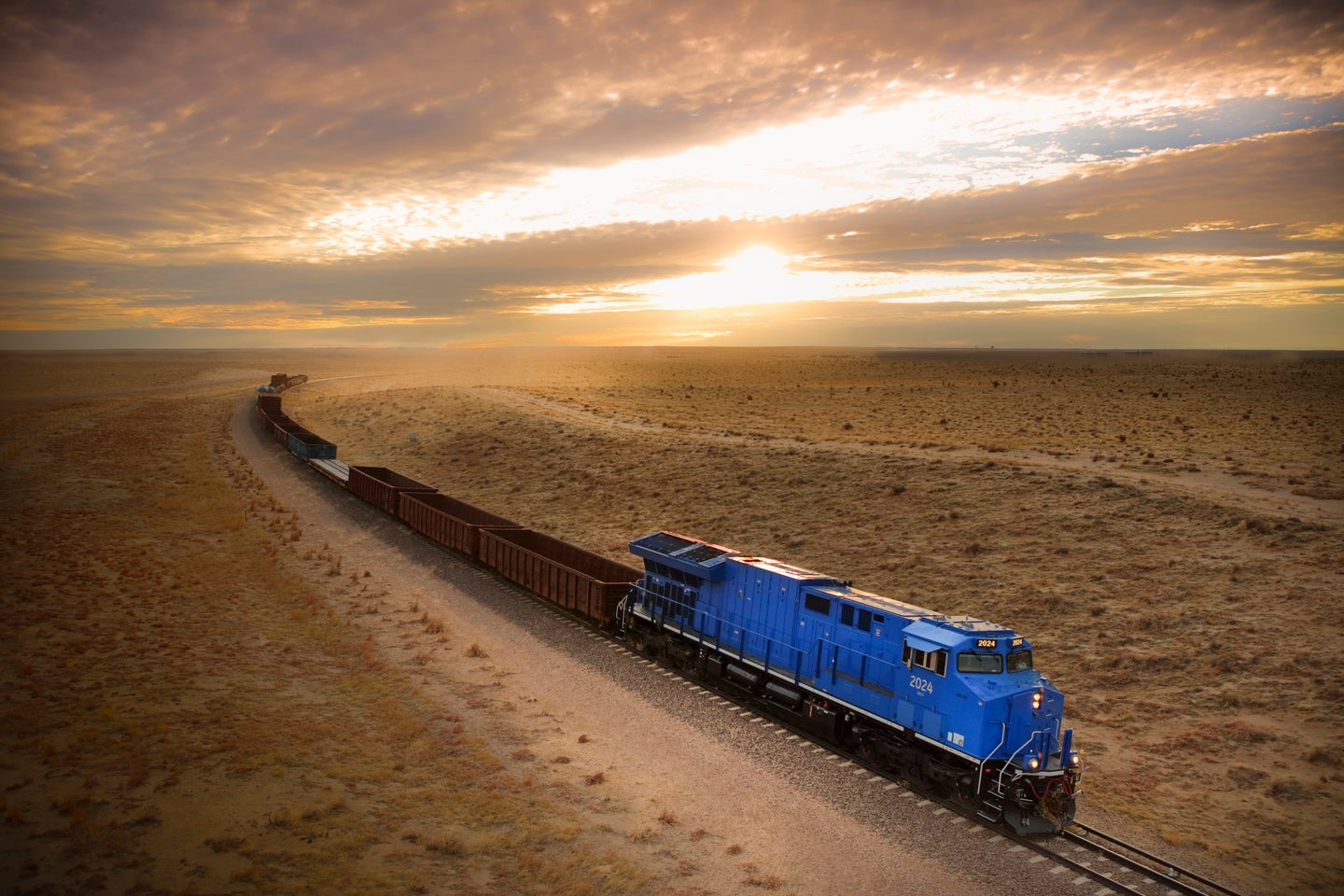 The Little Engine That Could was a bright, friendly blue locomotive who managed to overcome impossible odds through sheer force of will–I think therefore I can. GE’s new locomotive engine is a similar shade of blue, but it took more engineering than determination for it to achieve its goal of dramatically reducing air pollution.

Back in 2004, the EPA decided that by January 2015, the massive engines that power trains would need to enter the 21st century, reducing the amount of particulate emissions by 70 percent and nitrogen oxide (NOx) emissions by 76 percent. These Tier 4 standards have guided the development of train engines for the past 11 years, and we’re finally starting to see results.

Companies, including General Electric and Caterpillar have been working toward that goal for some time, racing to develop prototypes that are both efficient and meet the new emissions standards. Caterpillar anticipates having engines ready for production by 2017. GE’s Evolution Series Locomotive, meanwhile, just finished up testing at the Pueblo, Colorado Transportation Technology Center. Part of its testing involved hauling long lines of 130 train cars, loaded with containers, while in another test it had to haul cars filled with rocks, to simulate pulling huge loads of coal.

“The site has over 20 miles of dedicated tracks and we can run loops all day long at up to 70 miles-per-hour,” Michael Anderson told GE Reports. “We can do some unique things and simulate high-speed, heavy haul and other conditions. When you get to higher altitude, you have less oxygen and more particulate matter. But these new locomotives use software that can automatically adjust the mix and maintain low emissions.”

Instead of filtering out the particles and NOx from the diesel exhaust, the new locomotive has a more efficient engine that recirculates the exhaust to prevent NOx from forming, while an updated fuel delivery system reduces soot.

The first Evolution Series Locomotives will start rolling across the country sometime this year, and when they do, they’ll be used to haul freight.

Last month, photographer Vincent Laforet visited the test facility, where the locomotive was being put through its paces, hauling long strands of train cars across the landscape. Take a look through the gallery above to see some great images of the trains. 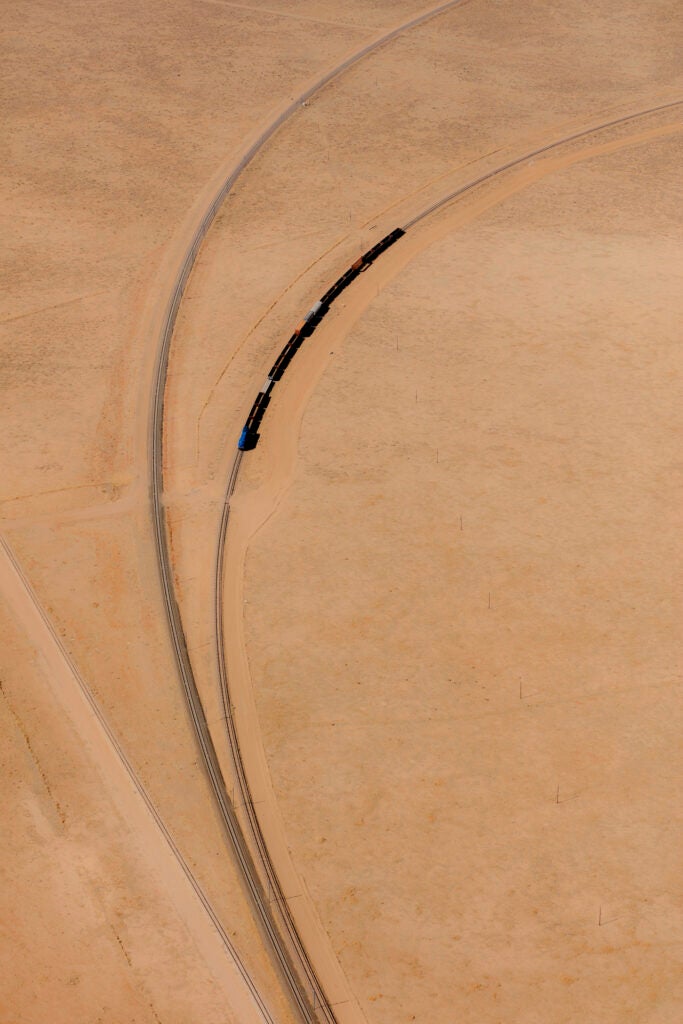 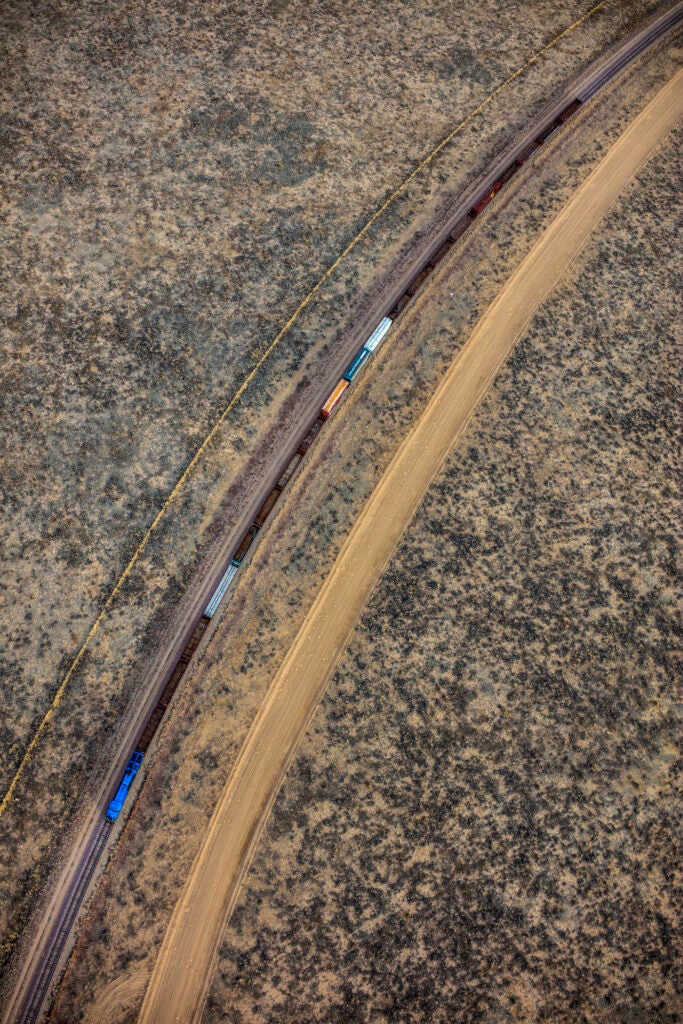