Light pollution has some unusual effects. 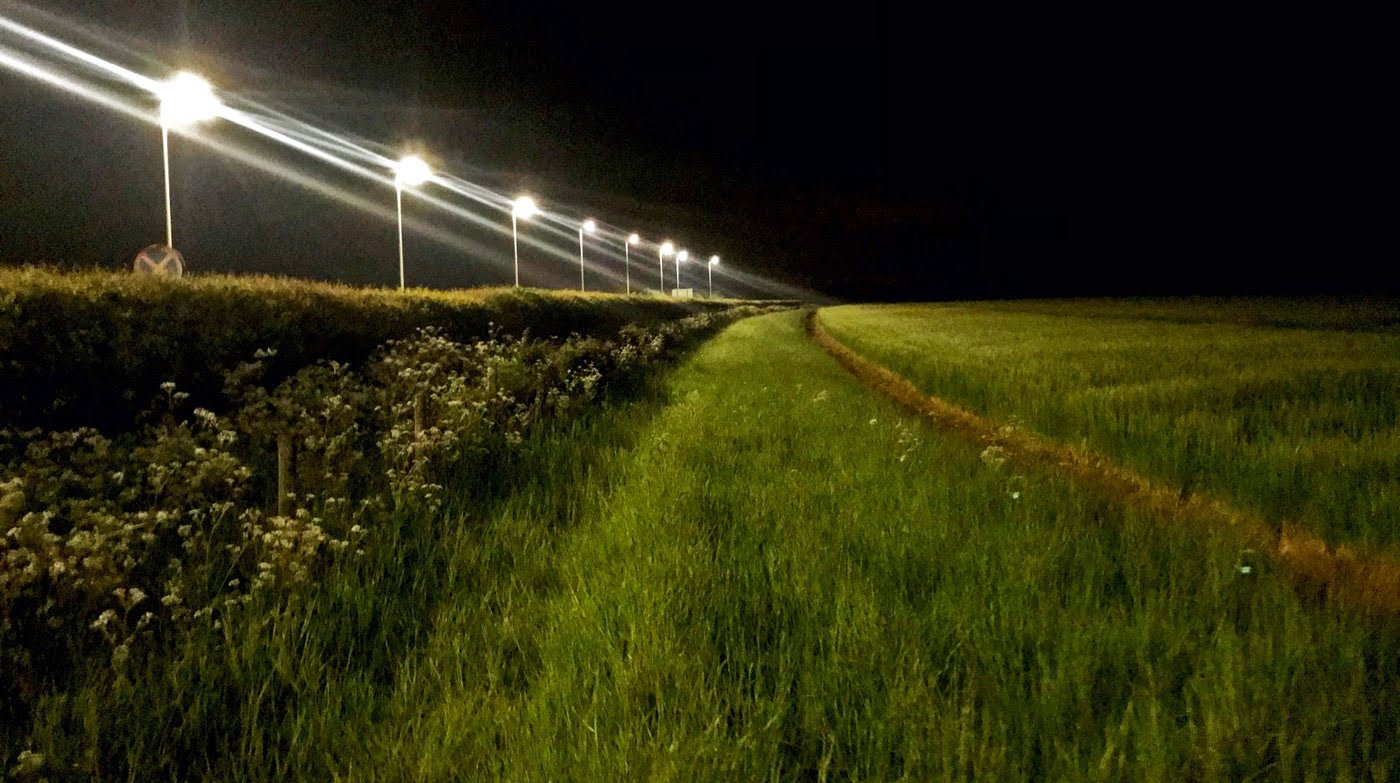 LED streetlights at one of the study sites in Tackley, Oxfordshire. Douglas Boyes
SHARE

Streetlights may make moth caterpillars plump up faster, but that’s not necessarily a good thing.

Globally, insect populations are in a long decline. The size of those losses can vary immensely by region, with some European monitoring stations finding 70 percent drops and other regions seeing small increases. But because insects are cornerstones of most ecosystems, their loss threatens to destabilize everything from bird populations to crop pollination.

“We found that many of these white LEDs are more harmful at a local level for insect populations,” says Douglas Boyes, a PhD student in ecology affiliated with the UK Centre for Ecology and Hydrology, and the paper’s lead author. “That probably hints that the classic mechanism that people think about—the insect flying up to the light—is maybe not the main mechanism causing these striking population declines.”

There’s no single cause to the global insect decline. One 2021 review of the subject, titled “Death by a thousand cuts,” lists the whole deck of anthropogenic changes as culprits: climate change, urbanization, introduced species, pesticides, and other pollution.

But previous research suggests that nighttime light—which has only existed for about the past 100 years—plays a role.

In the wild, moths have been found to fly for miles, which makes them challenging study subjects; it’s hard to know whether any effects on them are related to light, or to some other environmental factor. So this study looked specifically at moth caterpillars, which only move a few feet as they grow up.

The research took advantage of a kind of natural experiment along rural English roads. The team paired lit shoulders with dark sites just 60 to 100 meters down the road. The paired sites would have the same grasses and hawthorne hedgerows and the same surrounding land-use. They often bordered the same fields, giving the entomologists confidence that differences they saw were mainly from the light.

[Related: How to reduce light pollution in your area]

Boyes says that over the course of three years, he logged 400 hours of bug-catching and 14,000 kilometers (about 9000 miles) of driving—a bit farther than the distance from London to Johannesburg.

“You go in the spring, right as the buds burst, and that’s when the leaves are most nutritious, and you get these really high numbers of caterpillars,” he explains.

To gather caterpillars from hedges, “you basically stick drain piping or any kind of open surface under the hedge, and then you basically whack the hedge with a stick five times. Which causes all of the caterpillars to fall out of the hedge and into your receptacles. So that was quite fun.”

In the grass, it’s a bit easier. “The caterpillars spend the day at the base of these grasses, and climb up the stems at night. So you just go along with a sweep net and just sweep through the vegetation.”

The differences were stark: lighted hedges contained just half the caterpillars of their dark counterparts. Grass had one third fewer.

“In ecology, you’re not used to seeing 50 percent reductions,” Boyes says. “It’s just never that severe, at least for insects.”

The effects were strongest under LED lights, which is something of a surprise. Previous research from Boyes had found that another light source, high-pressure sodium, (the older, yellower type of bulb) attracted more moths, and therefore was thought to be more disruptive. That’s evidence, Boyes says, that there’s something deeper going on than simply adult moths flying into lights.

The caterpillars that did crawl under streetlights were also heavier—not enough that you’d notice it while out on a stroll, but enough to be clear on a laboratory scale.

What’s happening, Boyes explains, isn’t that the caterpillars are actually ending their growth with more meat in their exoskeleton. Instead, their growth was sped up, meaning that a three-week old illuminated caterpillar and a four-week old unilluminated peer might be the same size.

Previous studies in the lab found that caterpillars put on weight faster when exposed to artificial light. “My interpretation of that would be that a sort of evolutionary response when you’ve got something unknown is: ‘we’re going to develop as quickly as possible, to get away from this unknown thing so it’ll all be okay.’ So of course that means that the adults will be smaller. They may lay fewer eggs or not be able to fly as far.”

The researchers also suspect that fewer eggs are being laid in brightly lit patches. That could be because moths don’t like to land there to deposit eggs. It could also signal that the light is acting as an “ecological trap,” distracting moths who’ve come to lay their eggs, and making them more vulnerable to predators. Ss is often the case, it’s likely to be a combination of factors.